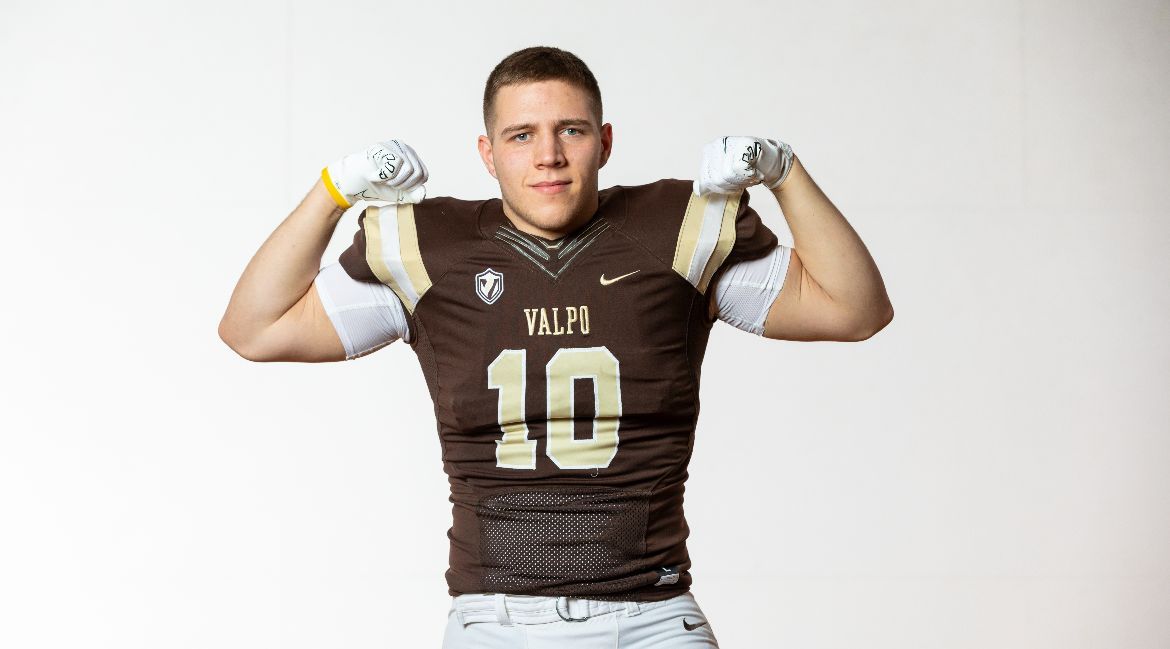 This Week in Valpo Football: At long last, the Valparaiso University football team will kick off the season on Saturday. A lot is different about this six-game Pioneer Football League spring slate, but the positive energy that has surrounded head coach Landon Fox’s program in recent years remains unchanged. After going through a typical spring practice schedule during the fall, Valpo will hold its competitive season this spring. The anticipation for the team’s first game since fall 2019 was already high, but the opponent makes it even higher. Valpo will match up with Butler in the latest rendition of the PFL’s long-standing rivalry on Saturday in the state capital.

Previously: This will mark the first time Valpo has taken the field in a game situation since Nov. 23, 2019 vs. Marist, a 26-14 setback at Brown Field. The game was closer than the final score would indicate, as Valpo trailed by five and had a chance to take the lead in the final minute before a pick six sealed the win for the Red Foxes.

Series Notes: This year’s season opener marks the continuation of a rivalry that dates all the way back to 1927. Valpo is 27-51 all-time against Butler including two wins in the last three seasons. This matchup has occurred every year since 1951. The most recent showdown was the penultimate game of the 2019 season, a heartbreaking 24-21 defeat for the Brown & Gold in Indianapolis. Valpo put together a valiant effort that featured a game-tying touchdown drive to even the score at 21 with 19 seconds to play. A game seemingly destined for overtime took another dramatic turn over the final 19 seconds of regulation, as Butler worked its way into field-goal range following a kickoff return, two plays and two Valpo penalties. The second of those flags was an offside call against Valpo on a missed 43-yard field goal attempt, giving the Bulldogs an untimed down for a 38-yard try. That attempt narrowly had the distance to give Butler the win. The most recent matchup marked the closest Hoosier Helmet game since 1997, when Valpo went south to Indianapolis and came home with a 19-17 triumph.

Following Valpo Football: A free video feed will be available for Saturday’s game via YouTube courtesy of Butler Athletics. The game will also be broadcast on 95.1 FM Valparaiso and the Valpo Sports Network (available on TuneIn Radio) with Todd Ickow describing the action. For in-game tweets, follow @valpoufootball on Twitter. Links to live video, audio and stats will be available on ValpoAthletics.com.

Head Coach Landon Fox: Landon Fox completed his first season as the head coach of the Valparaiso University football program in 2019. In Year 1 of the Fox Era, Valpo ranked in the Top 5 in the PFL in scoring defense (32.0, fifth), total defense (381.6, fourth), rushing defense (184.2, fourth) and passing defense (197.3, fifth). The defense also thrived in critical down-and-distance situations, as the team’s opponent third-down conversion percentage of 32.4 ranked second in the league and its opponent fourth-down conversion percentage of 46.2 was third. After spending the previous 11 seasons as the defensive coordinator and secondary coach at the University of Dayton, Fox was named the head football coach at Valpo prior to the 2020 season. His teams held opponents to an average of 19 points per game during his time as the defensive coordinator at Dayton. He helped the Flyers finish with 10 winning seasons in his 11 years on staff and guided a defensive backfield that produced one All-American, four Academic All-Americans, two PFL Special Teams Players of the Year and three corners who were invited to NFL Rookie Minicamp. Prior to joining Dayton’s staff, Fox served as the linebackers coach and special teams coordinator at Wayne State University in Detroit from 2005-2007. He also spent time as a defensive graduate assistant at Ball State University (2004), Dayton (2002-2003) and Lakeland College (2001). Fox began his coaching career as an assistant varsity coach at Preble Shawnee High School in Camden, Ohio during the 2000 season. During his playing days, Fox was a team captain and all-conference performer at Defiance College in Defiance, Ohio from 1995-1999 and graduated with a degree in physical education and health in May 2000 before earning his master’s degree in education from Lakeland in May 2002.

Scouting the Opponent: Butler was picked sixth in the PFL Preseason Poll, one spot behind Valpo. The Bulldogs went 3-9 (2-6 PFL) in the most recently completed season of 2019. They had one Spring 2021 Preseason All-PFL selection, offensive lineman Skyler Spetter.

Valpo in Openers: The Brown & Gold will attempt to open the season with a victory for the first time since 2007, in large part because the program has played challenging scholarship opponents in Week 1 in recent years. Valpo’s last Week 1 victory was Sept. 1, 2007, a 28-21 triumph vs. Saint Francis (Ill.). Valpo has lost the PFL opener each of the last three seasons, most recently falling 35-6 at Drake to start PFL play in October 2019. Valpo is 2-11 over its last 13 PFL openers with the wins coming vs. Davidson in 2016 and vs. Campbell in 2013. This will mark the first time Valpo opens the season with a league contest since Sept. 5, 1992 vs. Ashland, the team’s final season in the Midwest Intercollegiate Conference before joining the PFL.

Close Calls: One key for Valpo during the 2021 spring season will be getting over the hump to win close games. Valpo lost three straight games by six points or fewer late in the 2019 season before closing the year with a 12-point setback that was closer than the final score would indicate. The team played its best football of the year over the final five weeks of the season, but fell just shy in four of those contests. Valpo lost three straight by seven points or fewer for the first time since 1960 in early November 2019.

*Based on initial two-deep, starters subject to change

*Based on initial two-deep, starters subject to change