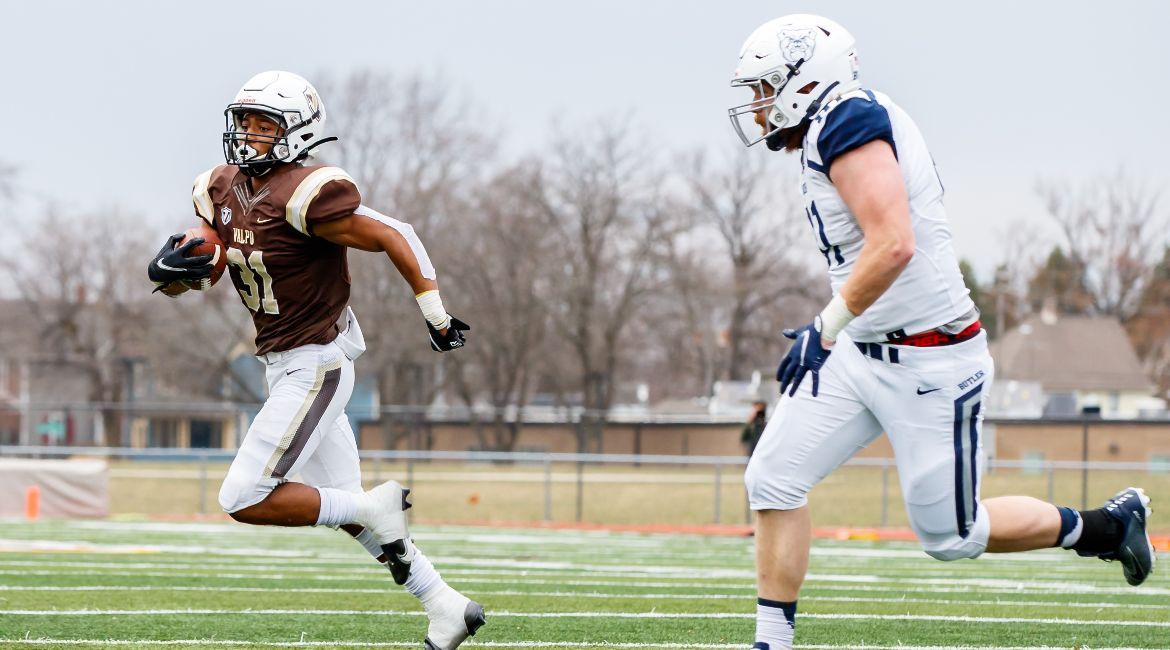 Keyon Turner has been involved in a turnover forced by the Valpo defense in each of his first three collegiate games.

Washington scored three touchdowns – two rushing and one receiving – to help Valpo to Saturday’s victory. The junior running back enjoyed his second game this season of 100+ rushing yards against the Bulldogs, this time going for 120 to help the Brown & Gold outrush the visitors 220-115. Washington had 26 carries and a long of 21. He added one reception, a 9-yard TD catch. Washington scored three of the team’s four TDs, with his rushing scores coming from 5 yards and 1 yard.

Turner has been involved in a crucial turnover forced by the Valpo defense in each of his three collegiate games. The freshman had a fumble recovery in Week 1 and an interception in Week 2 before snagging an interception on Saturday for one of the key plays of Valpo’s victory. The pick came with 6:09 remaining in the fourth quarter and the Brown & Gold leading 21-17. He made the interception at the Butler 13 and returned it 12 yards to the 1, setting up an insurance score that made it 28-17. The play proved pivotal in the eventual three-point triumph. Turner added five tackles and one pass breakup.

Valpo has won three official PFL honors this season and four total weekly awards counting those handed out by College Sports Madness. This marks Washington’s second honor as he was named College Sports Madness Offensive Player of the Week for his 199-yard rushing performance in Week 1 at Butler. Valpo also picked up a PFL Special Teams Player of the Week in Week 2 courtesy of punter Ben Niesner.

The Brown & Gold will look to make it back-to-back wins on Saturday at 1 p.m. CT at Drake. The game will be broadcast on Bulldogs Vision in addition to the hometown radio call on the Valpo Sports Network. Links to live video, audio and stats will be available on ValpoAthletics.com.