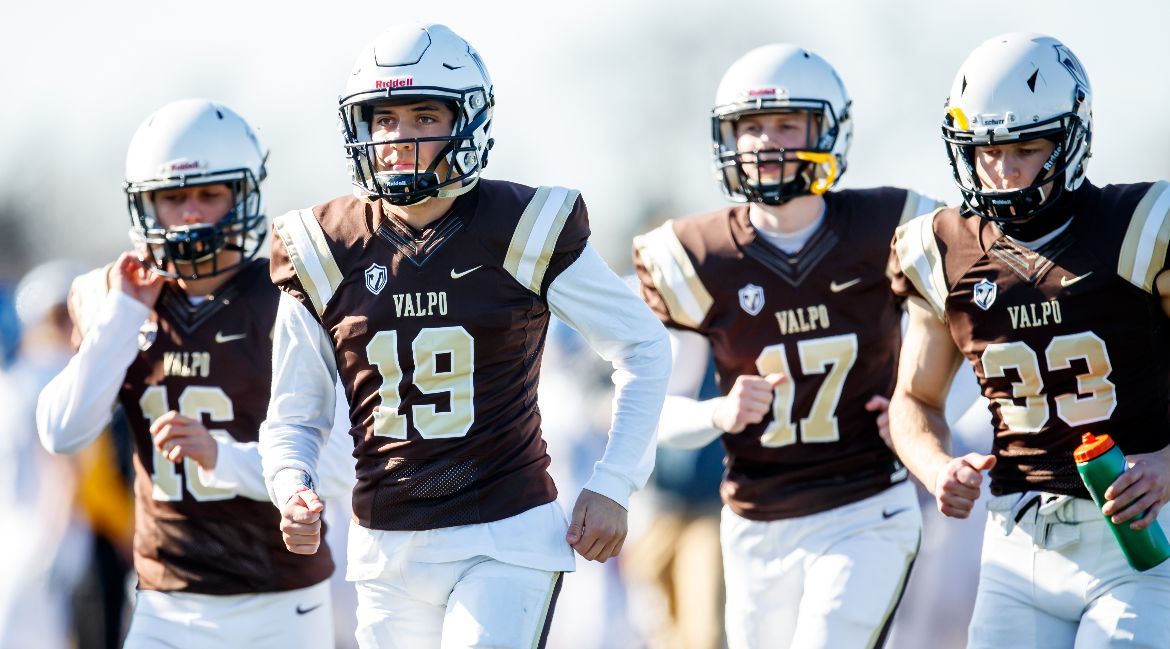 This Week in Valpo Football: The Valparaiso University football team will attempt to build on its strong start to the season this week as the squad makes its way to Des Moines, Iowa to match up with Pioneer Football League foe Drake. Valpo will look to avenge its lone loss of the season thus far, which came at the paws of the Bulldogs in Week 2. If the Brown & Gold can build on their Hoosier Helmet victory from last week by topping Drake, it will mark the program’s first ever win in Des Moines. Valpo will face a team known as the Bulldogs for the fourth consecutive week.

Previously: Valpo defeated rival Butler for the second time this season, winning the Hoosier Helmet rivalry trophy in a 28-25 thriller this past Saturday at Brown Field. Valpo faced an 11-point second-half deficit, but scored 21 unanswered points en route to the victory. Robert Washington (120) and Chris Duncan (94) led the rushing attack and helped Valpo outgain Butler on the ground 220-115. Jaxon Peifer and Evan Annis had nine tackles apiece, while Keyon Turner made a key fourth-quarter interception to help seal the victory. Valpo’s Braden Contreras recovered a Butler onside kick with less than two minutes remaining to put the finishing touches on the significant triumph.

Series Notes: Valpo will look to reverse its fortunes in the all-time series as Drake holds a 25-3 mark against the Brown & Gold. Valpo’s 17-6 setback in Week 1 marked the team’s 17th consecutive defeat against the Bulldogs, a skid that dates back to a 51-45 overtime victory on Oct. 25, 2003 at Brown Field. Valpo’s struggles in Des Moines have been even more pronounced as the program is 0-13 all-time at Drake Stadium, setting the stage for the current group to make history on Saturday. Valpo has been visiting Drake since 1994 and has never come home with a win.

Following Valpo Football: The game will be broadcast on Bulldog Vision, which is available free of charge courtesy of Drake Athletics. Todd Ickow (play-by-play) and Paul Oren (analyst) will handle the Valpo Sports Network radio call, which is available on 95.1 FM Valparaiso and via the TuneIn Radio app. Links to live video, audio and stats are available on ValpoAthletics.com.

Head Coach Landon Fox: Landon Fox (3-12) completed his first season as the head coach of the Valparaiso University football program in 2019. In Year 1 of the Fox Era, Valpo ranked in the Top 5 in the PFL in scoring defense (32.0, fifth), total defense (381.6, fourth), rushing defense (184.2, fourth) and passing defense (197.3, fifth). The defense also thrived in critical down-and-distance situations, as the team’s opponent third-down conversion percentage of 32.4 ranked second in the league and its opponent fourth-down conversion percentage of 46.2 was third. After spending the previous 11 seasons as the defensive coordinator and secondary coach at the University of Dayton, Fox was named the head football coach at Valpo prior to the 2020 season. His teams held opponents to an average of 19 points per game during his time as the defensive coordinator at Dayton. He helped the Flyers finish with 10 winning seasons in his 11 years on staff and guided a defensive backfield that produced one All-American, four Academic All-Americans, two PFL Special Teams Players of the Year and three corners who were invited to NFL Rookie Minicamp. Prior to joining Dayton’s staff, Fox served as the linebackers coach and special teams coordinator at Wayne State University in Detroit from 2005-2007. He also spent time as a defensive graduate assistant at Ball State University (2004), Dayton (2002-2003) and Lakeland College (2001). Fox began his coaching career as an assistant varsity coach at Preble Shawnee High School in Camden, Ohio during the 2000 season. During his playing days, Fox was a team captain and all-conference performer at Defiance College in Defiance, Ohio from 1995-1999 and graduated with a degree in physical education and health in May 2000 before earning his master’s degree in education from Lakeland in May 2002.

Winning a Close One

Gaining on the Ground

Dropped Behind the Line