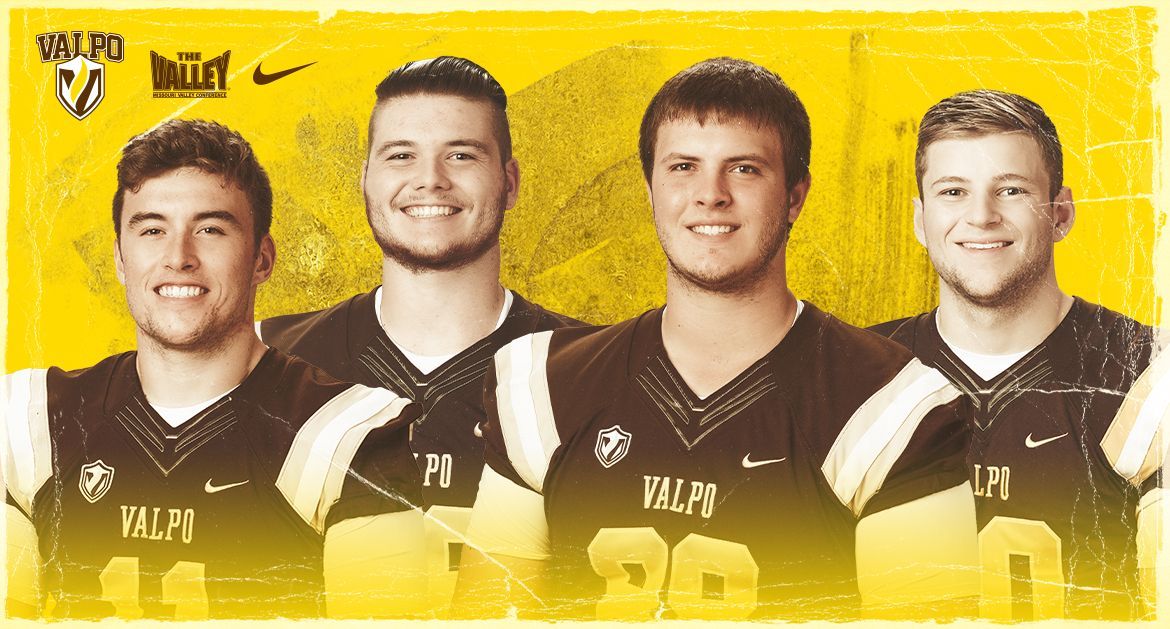 The Valparaiso University football program wrapped up a successful week of Pioneer Football League honors on Wednesday as a quartet was named to the Academic All-PFL First Team while an additional duo received Academic All-PFL Second Team honors.

The recognition for Niesner caps off a busy week as he also earned PFL Co-Special Teams Player of the Year and All-PFL First Team honors. The Valpo punter tied the Valpo single-season record for punting average at 43.6 yards per punt, matching Greg Wood’s 2010 mark that is also the PFL record. Niesner, who owns a 3.73 grade point average in leadership in sport, ranked eighth nationally and first in the PFL in punting average. He booted a career-long 72 yarder in Valpo’s April 17 season finale vs. San Diego, tying for the fifth-longest punt in the nation this season. He won the PFL Special Teams Player of the Week twice during the six-week season, booted seven punts 50+ yards and placed nine inside the 20. A 2019 PFL honor roll member, Niesner also received, 2019 All-PFL Honorable Mention, Spring 2021 Preseason All-PFL Watch List and NFF Hampshire Honor Society member.

A Second Team All-PFL choice, Annis ranked second on the team and eighth in the PFL at 6.8 tackles per game. He accrued 2.5 TFL in six games, totaling 41 tackles and 15 solos. He had three straight games with eight tackles or more from March 20 to April 3, leading the team in each of those weeks. Annis, who owns a 3.68 GPA in bioengineering, earned College of Engineering Dean’s List both semesters as a true freshman. In addition, he is a Pi Kappa Alpha member, alumni relations chairman and member of the judiciary board. He was a member of the 2019 PFL honor roll.

A member of the dean’s list three straight semesters, Parrish is a member of the electrical engineering honor society. He is a Hesse Scholar, tutoring his peers in engineering. The owner of a 3.97 GPA in electrical engineering, Parrish played in five of Valpo’s six games this season and was part of an offensive line that helped Valpo finish third in the league in rushing offense while outrushing opponents for the first time since 2007. He was on the 2019 PFL Honor Roll.

Bishop, who maintains a 3.61 GPA in actuarial science, has appeared in 19 games over the last three seasons including all six this spring. He was a member of a defensive line that helped Valpo finish top-3 in the league in scoring defense, total defense and rushing defense this spring. A three-time member of PFL honor roll, Bishop is one of the team’s community service liaisons. He earned induction into the NFF Hampshire Honor Society and volunteers at the Chesterton Boys & Girls Club.

Byrd, a bioengineering student with a 3.33 GPA, started all six games this season and was the leader of an offensive line that helped Valpo finish third in the league in rushing offense while outrushing opponents for the first time since 2007. He has a strong interest in prosthetics and chose Valpo in part because of the nationally-ranked College of Engineering. Byrd has performed undergraduate research in the Human Movement Laboratory, serves as a student tutor in the Hesse Learning Center on campus and is a member of the American Society of Mechanical Engineers. A two-time member of the PFL honor roll, Byrd was also named All-PFL Honorable Mention this week.

Sherman, who holds a 3.48 GPA in management, finished third on the team with 28 tackles including 19 solos over six games and had a season-high seven tackles in the March 27 victory over Butler. He made an interception in the April 17 win over San Diego, Valpo’s first win against the Toreros since 2003. A two-time member of the PFL Academic Honor Roll, Sherman has 93 career tackles over three seasons including six TFL. He had an interception in 2018 and a fumble recovery in 2019.