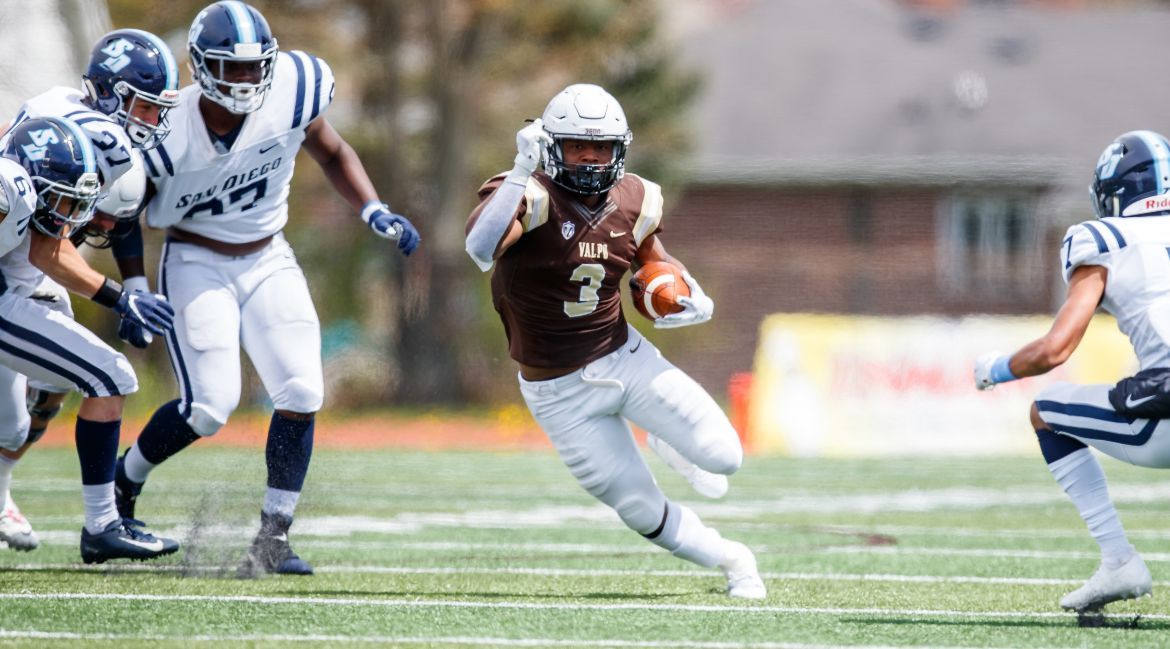 Robert Washington was named the PFL Offensive Player of the Year following the spring season.

Washington was one of seven unanimous All-PFL selections and was named the first PFL Offensive Player of the Year in program history last spring, while Niesner shared PFL Special Teams Player of the Year accolades. In addition, Niesner was tabbed an FCS National Punter of the Year Semifinalist.

Washington ranked eighth nationally in FCS in rushing yards per game at 108.8. He accrued 100 or more rushing yards on four occasions including a season-high 199 on 39 carries in the March 13 season opener at Butler, the highest single-game rushing output by a Valpo player since 2012. His 199-yard performance marked the ninth-highest single-game rushing number in the nation last season, and he was one of three players nationally with multiple games of 180+ rushing yards.

Bartholomew boasted the league’s best field-goal percentage at 87.5 percent, converting seven of his eight attempts. He had the most point-after attempts without a miss in the league, going a perfect 13-for-13 on PATs. The redshirt sophomore ranked sixth in the PFL in scoring at 5.7 points per game.

Purty received All-PFL Honorable Mention last spring, finishing with a team-high 5.5 tackles for loss. Byrd was also an All-PFL Honorable Mention choice and a member of the Academic All-PFL Second Team in addition to winning the Sever Award, which is presented annually to the team’s top offensive lineman. Turner led the nation in takeaways, was a finalist for national freshman of the year, earned Freshman All-American recognition from HERO Sports and was the lone freshman on the All-PFL First Team. Peifer was an All-PFL First Team choice and earned the team’s Defensive Player of the Year Award by finishing with a team-high 42 tackles during the six-game season.

Valpo is coming off its best winning percentage and highest Pioneer Football League finish since 2003.