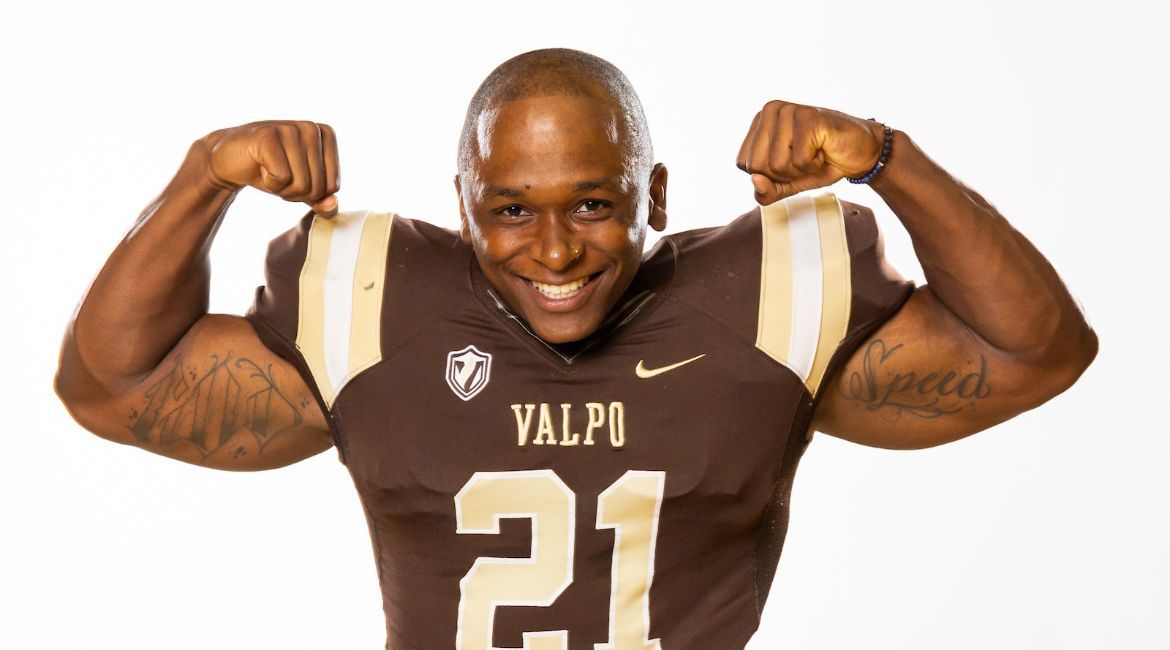 This Week in Valpo Football: The Valparaiso University football season is not over yet. The Beacons originally thought their season ended with the Pioneer Football League finale on Nov. 19 vs. Drake at Brown Field, but after a week off for Thanksgiving the team finds itself back in action with a trip to New Mexico State on the docket for the program’s first-ever contest against an FBS opponent.

Previously: Valpo recognized 24 seniors prior to a 24-0 loss to Drake on Nov. 19 at Brown Field. The shutout setback was not characteristic of the competitive football that head coach Landon Fox’s team played throughout the season. Redshirt freshman linebacker Jake Birmingham posted 11 tackles including eight solos, his third straight double-figure tackle output after earning significant playing time late in the season. Sam Hafner added seven stops. Punter Evan Matthes averaged 40.5 yards per punt on six attempts, pinning three inside the 20 including one that was downed at the 1-yard line. Aaron Dawson had a team-high six catches for 36 yards, while Matt Ross paced the squad in receiving yards with 66 on five grabs. Quarterback Michael Appel Jr. went 18-of-39 for 172 yards.

Series Notes: This will not only mark Valpo’s first game against New Mexico State, but it will be the first time the Beacons match up with any FBS opponent.

Head Coach Landon Fox: Landon Fox (14-26) is in his fourth season as the head coach of the Valparaiso University football program in 2022. In his third season leading the program in Fall 2021, Valpo finished with a Pioneer Football League record of .500 or better for a second consecutive year. This marked the first time Valpo had achieved that feat since the 1999 and 2000 campaigns. The Beacons won four Pioneer Football League games in the same season for just the third time ever (2017 and Spring 2021) and four league games in any conference for just the third time since 1968. During his second season at the helm in Spring 2021, Fox was a finalist for the Eddie Robinson Award – which is presented annually to the FCS National Coach of the Year – after guiding Valpo to its best winning percentage since 2003 and tying for the squad’s best winning percentage since 1999. He led his team to Pioneer Football League runner-up honors, the program’s highest finish in the league standings since the PFL championship season of 2003. Fox’s defensive roots paid dividends on that side of the football in his second year at the helm, as the team enjoyed its best defensive season in four decades. Valpo held opponents to 283.3 yards per game, the program’s best total defense in the last 40 years. In Year 1 of the Fox Era in 2019, Valpo ranked in the Top 5 in the PFL in scoring defense (32.0, fifth), total defense (381.6, fourth), rushing defense (184.2, fourth) and passing defense (197.3, fifth). After spending the previous 11 seasons as the defensive coordinator and secondary coach at the University of Dayton, Fox was named the head football coach at Valpo prior to the 2019 season. He helped the Flyers finish with 10 winning seasons in his 11 years on staff and guided a defensive backfield that produced one All-American, four Academic All-Americans, two PFL Special Teams Players of the Year and three corners who were invited to NFL Rookie Minicamp. Prior to joining Dayton’s staff, Fox served as the linebackers coach and special teams coordinator at Wayne State University in Detroit from 2005-2007. He also spent time as a defensive graduate assistant at Ball State University (2004), Dayton (2002-2003) and Lakeland College (2001). Fox began his coaching career as an assistant varsity coach at Preble Shawnee High School in Camden, Ohio during the 2000 season. During his playing days, Fox was a team captain and all-conference performer at Defiance College in Defiance, Ohio from 1995-1999 and graduated with a degree in physical education and health in May 2000 before earning his master’s degree in education from Lakeland in May 2002.

What They’re Saying About the Opportunity

PFL Accolade: For his aforementioned effort at Marist in Week 11, Aaron Dawson was tabbed the Pioneer Football League Offensive Player of the Week for the second time this season. In total, the Beacons have collected four PFL weekly awards with Dawson and kicker Brian Bartholomew (Special Teams) nabbing two apiece.

Among the FCS & PFL Leaders

Sherman to the House

Dawson’s Day for the Ages

Bart’s Bounce Back: Redshirt senior kicker Brian Bartholomew was named the Pioneer Football League Special Teams Player of the Week for the second time this season after accounting for 10 points in the Week 8 game at Morehead State. He went 4-for-4 on PATs and 2-for-2 on field goals including a 48 yarder in the five-point win over the Eagles. That showing helped him bounce back after a rare down week the previous week at Butler. This was his second PFL Special Teams Player of the Week nod this season and the third of his career.

Offensive Outburst: Valpo generated 463 yards of total offense in the Week 6 game at Presbyterian, which represented the team’s highest total during the Landon Fox Era and the most since 465 on Nov. 10, 2018 vs. Jacksonville. The day featured exceptional balance as the Beacons boasted 240 passing yards and 223 rushing yards. This was just the second time in the last five seasons that Valpo has accrued more than 200 passing yards and more than 200 rushing yards in the same game, joining the Fall 2021 season finale vs. Morehead State. The win at Presbyterian represented Valpo’s second most lopsided win of the Landon Fox Era, behind only last year’s 47-3 victory at Butler.

Topping the Toreros: The win over defending PFL co-champion San Diego to open league play represented Valpo’s second win over San Diego in the last three matchups after the team entered the Spring 2021 season with a 14-game head-to-head losing streak against the Toreros. San Diego is 50-4 in its last 54 PFL games dating back to the middle of the 2015 campaign, and two of those four losses have come to the Brown & Gold. USD entered the Week 4 game at Brown Field winners of seven straight PFL contests and owners of the best conference winning percentage in the FCS nation since 2011 (.907). San Diego earned a share of its PFL-record-tying 12th regular season title in Fall 2021 and was picked second in this year’s preseason poll. This was the highest projected opponent on Valpo’s schedule as the Beacons do not play preseason favorite Davidson this year.

Challenging Nonconference: Valpo has not backed away from playing a challenging nonconference schedule in recent seasons. The Week 1 victory over Indiana Wesleyan was the program’s first nonconference triumph during the Landon Fox Era and first since Sept. 16, 2017, a 44-10 win at Trinity International. Valpo played a ranked NAIA team in Week 1 before taking on teams receiving votes in the national FCS polls in each of the final two nonconference contests, both of which occurred away from Brown Field.

Transfer Tracker: When former Valpo running back Robert Washington received an NFL Rookie Minicamp Invite from the Philadelphia Eagles this past May after wrapping up his two-year tenure with the Brown & Gold, it tied a bow on a successful career that helped show that transfers can flourish in Valpo’s program. Washington is one of numerous transfers who have had strong success in Fox’s young tenure. This season, in addition to the freshman class, the program has welcomed a new crop of transfers. Linebacker Ben Hines (Washington), defensive back Tyler Days (Boston College), linebacker Hunter Nabers (Fresno State), defensive back Ousmane Dabo (Eastern Kentucky), punter Evan Matthes (West Virginia), running back Aaron Dawson (Central Connecticut State), tight end Jalen Jones (Lincoln) and tight end Dawson Pierson (East Tennessee State) have transferred into the program. In total, the roster features 13 players who started their collegiate careers at different institutions.

Roster Rundown: The program has continued to bring in talent from all over the United States. This year’s roster features athletes from over half of the 50 states as 26 states are represented. Illinois is the state most represented on Valpo’s roster as 23 players hail from the Land of Lincoln. Other states in double figures are Ohio (14), Michigan (13) and California (10) followed closely by Indiana (eight).