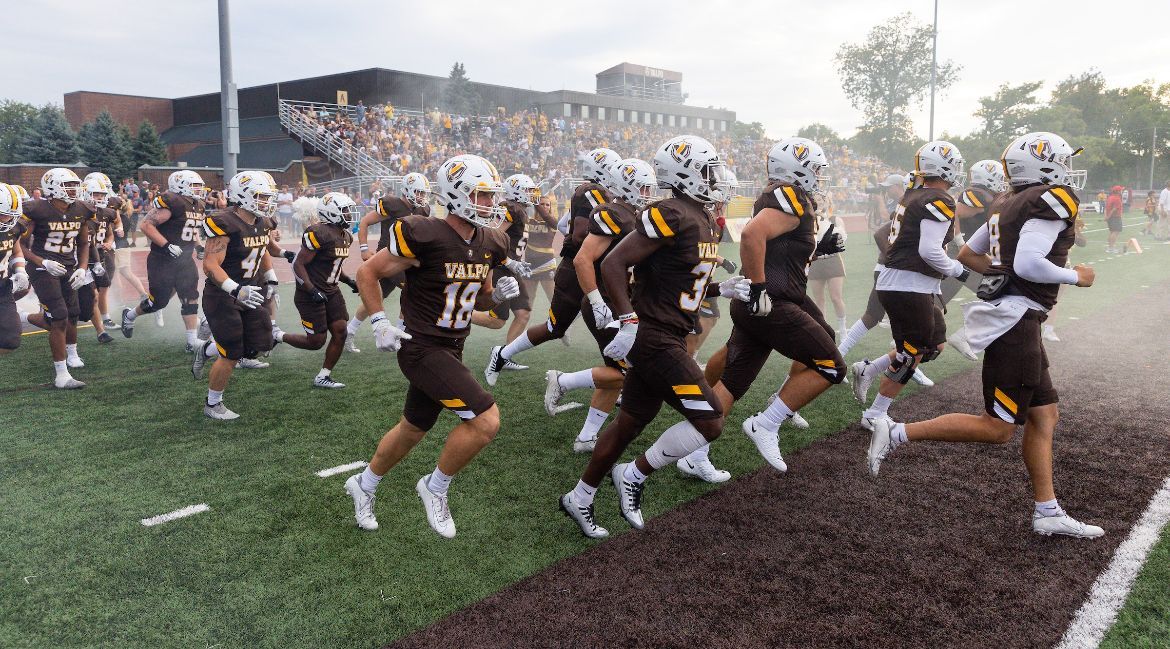 The Valparaiso University football team played a game against New Mexico State University on Saturday afternoon in Las Cruces, N.M., that much is true. But on this day, the game itself was not the full story. The full story was something larger than the result.

Make no mistake – the Valpo football program arrived in New Mexico for the program’s first ever game against an FBS opponent with one goal in mind. The same goal they have every week, and a goal they’ve achieved more frequently in the last three seasons than this program has seen in over two decades – win a football game. So yes, in that sense, there was disappointment with a 65-3 loss to a bowl-bound, full-scholarship FBS opponent on Saturday afternoon.

On defense, Valpo created a late turnover with Jake Birmingham forcing a fumble and Hunter Nabers on the recovery. Redshirt freshman Kevin Spelman had four tackles including a sack and 1.5 TFL. However, the game was not the full story – and we already told you that.

The story was Solomon Davis. Not just Solomon Davis, no, but all of the players in the program like him, who have dedicated their college careers to Valpo football and received an unexpected and unprecedented opportunity to play one more football game on Saturday. One catch. That’s the summary of Davis’ on-field production in his first three seasons in the program, which were riddled by injuries. On Saturday, he took the field as a First Team All-Pioneer Football honoree after a breakout season that saw him finish with 43 catches for 748 yards.

The story was Aaron Byrd, who put on the pads one last time, and the first time in an FBS environment. As an offensive lineman, the limelight can be minimal, but there’s perhaps no one who deserves attention more than Byrd, who has excelled academically and athletically while representing Valpo with class for five seasons. The story was another captain, Kohlton Sherman, who played his 50th and final game with the Brown & Gold.

The story was all of the seniors who got one last chance to represent Valpo football. One final reward for being part of the program as it finished with a league record of .500 or better in three straight seasons for the first time since 1998-2000 and just the second time since 1964. Before the last three seasons, Valpo football had won four PFL games in a season just once in the last 27 years. Now, the program has done so in three straight campaigns. The team wasn’t celebrating the score on Saturday – and there’s more work to be done to reach the program’s ultimate goals, about that there’s little doubt – but there is plenty of reason for pride and optimism from a group that has helped the team turn the tide and set the stage for a successful future.

The seniors were a big part of the story, yes, but they weren’t the only story on Saturday afternoon in Las Cruces, N.M. Every player on the roster made the trip with the team. While some were soaking in their final taste of a Division-I football road trip, others were going through the experience for the first time. For the underclassmen, this week was about one more week of practice and one more opportunity to make strides and build toward the program’s bright future.

The football game is the main thing on the program’s business trips across the country, but it’s not the only thing. Players, coaches and staff experienced the beautiful scenery of Las Cruces on Friday by walking through Dripping Springs Natural Area, the latest in a series of team experiences on Friday road trips throughout the season.

The accomplishments on the field? Those speak for themselves and are a big part of the story of the 2022 Valpo Football season in their own right. A win over defending conference champion San Diego. The program’s first-ever win at Marist. The program’s first win at Morehead State since 2006. The list goes on and on. But the program is also about creating memories that last a lifetime.

And above all, it’s about the people. And the people were the story on Saturday afternoon in Las Cruces.

“When you face teams that have very good talent, if they’re going to win the game, you have to make them earn it. We haven’t quite gotten to that point in our program yet where we’ve learned to do that. We gave up too many big plays in the first half. We’ve got to the point where we make a team like this earn it. Offensively, there were some bright spots early as we were able to move the ball. That was encouraging. As the game moved on, we started to play a little better defensively, but offensively we got in a lull and couldn’t move it. That’s the key to continue to grow the program. I wouldn’t take this experience back for anything. To be able to play in a game where you have that kind of speed is something that you can’t duplicate, so it’s only going to make us better.”

“I appreciate the fact that we were able to continue to be around the guys for an extra week. Next week, they’re into finals, and then they’re home for a month, so you won’t get a chance to see the guys. You relish an opportunity like this.”

“This experience is about motivation. It shows you how important the details are. When you go into winter lifting and conditioning, you’ve got to do an unbelievable job in terms of attention to the detail and executing at a high level – whether that’s a lift, or a sprint, or whatever. We’ve come a ways with that, but we want to continue to improve.”