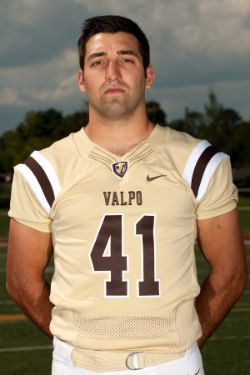 2015: Saw action in two games in his junior year of eligibility ... made appearances Sept. 26 versus San Diego and Oct. 3 at Davidson ... member of PFL Academic Honor Roll.

2014: Appeared in six contests for Valpo...registered a tackle in the team's season opener at Western Illinois (Aug. 28)...notched a stop at Campbell (Sept. 27)...was responsible for two tackles versus Missouri Baptist (Oct. 11) in the Crusaders' 55-7 Homecoming win over the Spartans...was named to the PFL Academic Honor Roll.

2013: Appeared in four games with the Brown and Gold...forced a fumble and recorded two solo tackles at Mercer (Oct. 12).

2012: Did not see action with the Crusaders...sat out as a redshirt.

Prep: A three-year letterwinner for the Red Devils ... led team to the Metro Catholic Conference championship three times ... team three state semifinal appearances in 2009, 2010, and 2011 ... tied a school record with two interceptions in a quarter as a senior ... also lettered in basketball and track and field.

Personal: Charlie is the son of Michael and Beth Hackett ... major is finance.