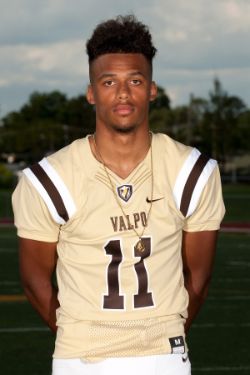 2017: Was away from campus during the fall semester, did not particiapte in football during his third year on campus.

2016: Played in 10 games and made 30 tackles (16 solos) while grabbing two interceptions and breaking up three passes... Was one of four Crusaders with multiple interceptions... Made his first interception of the season and the second of his career on Oct. 1 at Morehead State, returning it 29 yards... Made another interception on Oct. 22 at San Diego.

2015: Appeared in nine games in his first season with the Crusaders ... tallied six tackles, four of the solo variety ... recorded a pair of tackles in debut Sept. 3 at Eastern Kentucky ... posted first career interception Sept. 12 against Sacred Heart ... member of the PFL Academic Honor Roll.

Prep: A four-year letter winner for the Panthers...earned All-Conference honors his junior and senior seasons...named an Indiana All-Star as a senior...also lettered twice in track...member of National Honor Society.

Personal: Christian is the son of Clifford and Destiny Campbell ... major is political science.