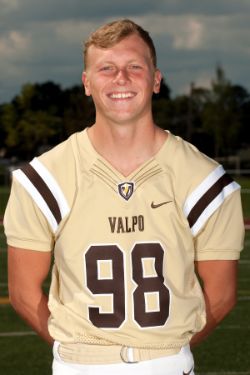 2016: Saw game action for the first time in his college career, kicking in eight games for the Brown and Gold... Made five of his eight field-goal attempts and was a perfect 27-for-27 on PATs... Went 2-for-2 on field-goal tries in his collegiate debut on Sept. 3 at Illinois State... Had makes from 45 and 43 yards in the game against the Redbirds, becoming the first Valpo kicker to connect on a pair of 40+ yard field goals in the same game since David Hamaker in 2008... The 45-yard field goal was the longest make by a Valpo player in the last 10 years... Named the PFL Special Teams Player of the Week for his performance against Illinois State... Matched a program record by making seven extra points in a single game on Sept. 17 against Trinity International... Had another two field goal game on Oct. 1 at Morehead State... Kicked off 16 times, averaging 51.4 yards per kick... Earned a place on the PFL Academic honor roll and the all-PFL second-team by virtue of his 3.35 GPA in psychology.