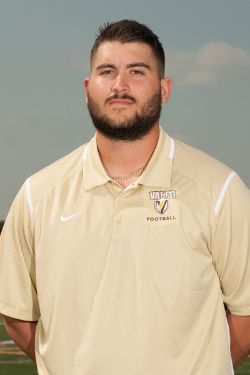 Sami Caygoz enters his second season as a member of the Crusader coaching staff in 2016, working directly with Valpo's tight ends.

Prior to arriving at Valpo, Caygoz served two seasons as tight ends coach at King's College in Pennsylvania. That job followed a fine career at Franklin & Marshall College where he was a three-year starter for the Diplomats, changing positions three times for the betterment of the team. He started all 32 games at F&M, including a pair of post-season appearances. Caygoz was an All-Centennial Conference selection at center in his final season in 2012 where he was responsible for all offensive line calls and led a unit that allowed the least number of quarterback sacks in the Centennial Conference

He began his collegiate playing career at Division II University of New Haven (CT) where he started five games as a true freshman before transferring to F&M. Caygoz earned his Bachelor of Arts degree in English from Franklin & Marshall in May of 2013.