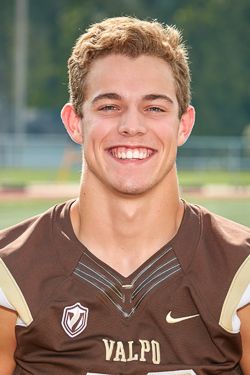 Prep: Totaled 31 tackles as a senior with six tackles for loss and four interceptions… Also served as a return specialist and had two touchdowns, averaging 40 yards per return… Missed four games due to a sprained ankle as a senior… Was named Northern Illinois Big XII all-conference and Morris Daily Herald all-area special mention… Helped his team finish the season with an 11-3 record and a conference championship… Helped his team finish as the IHSA Class 4A state runner-up, falling 24-21 to Rochester on a game-winning field goal… Was named defensive skill player of the year for his team... Was a three-sport athlete and won eight varsity letters (three in football, three in basketball and two in baseball)… Was named Northern Illinois Big XII all-conference twice in football and twice in baseball… Was one of three individuals nominated for his high school’s athlete of the year honor… Achieved honor roll in seven of his eight semesters, was a member of National Honor Society and maintained a 5.167 GPA on a 5.0 scale.

Personal: Son of Daniel and Tracie Voitik… Is the youngest of four children… Older siblings are Alex, Andrew and Elizabeth… Born on April 7, 2000… Majoring in mathematics education… Took piano lessons for eight years and was in band until high school. Still knows how to play the piano… Tutored students in and out of school during high school.