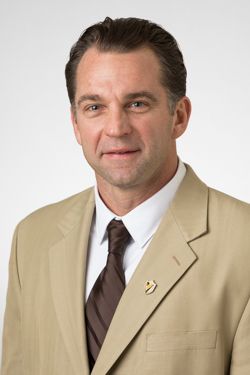 Landon Fox completed his third season as the head football coach at Valparaiso University in Fall 2021.

The program finished with a Pioneer Football League record of .500 or better for a second consecutive season in Fall 2021. This marked the first time Valpo had achieved that feat since the 1999 and 2000 campaigns. The Beacons won four Pioneer Football League games in the same season for just the third time ever (2017 and Spring 2021) and four league games in any conference for just the third time since 1968.

Fox continued his success against rival Butler during the Fall 2021 slate, as Valpo improved to 3-0 against the team from Indianapolis during the calendar year by blitzing the Bulldogs 47-3. That established a program record for margin of victory against a Division-I opponent and was the largest margin of victory in league play in program history. The game at Butler also marked the first time Valpo went on the road and held an opponent to three points or fewer since 2006.

During the Nov. 6 game vs. Presbyterian and the Nov. 13 game vs. Butler, Valpo totaled 112 points in a two-game span, tying the 2017 squad (vs. Marist, vs. Morehead State) for the program’s most points over two games since 1985. The team’s 65 points in the win over Presbyterian marked its highest single-game scoring output since 1996 and the fifth-highest single-game scoring output in program history.

The Fall 2021 season also saw Fox lead the program to a 45-28 victory over Dayton, where he spent a decade leading the defense before taking over the helm of Valpo’s program. The 45 points were the team’s most in the 30 all-time matchups with the Flyers and the 17-point margin of victory represented Valpo’s largest in the all-time series.

Fox guided Valpo to a 24-21 win at Drake on Sept. 25, 2021, the team’s second straight victory over the Bulldogs after a 17-game head-to-head losing streak. Prior to the calendar year of 2021, Valpo was 0-14 all-time at Drake, and the program has now won two straight in Des Moines. Valpo beat both Drake and Dayton during the Fall 2021 season, the first time the program defeated both of those foes in the same year since 2003.

During Year 3 of the Fox Era, the Beacons led the nation in blocked kicks with nine, the second most in program history and most since 1991. Valpo was the only team in all of Division-I college football (both FCS and FBS) to block nine kicks during the season. On Oct. 30 at San Diego, Valpo tied a PFL record for blocked kicks in a single game with three. Elsewhere on special teams, Valpo made 12 field goals, tied for the fifth most in program history.

Defensively, the team notched 32 sacks in Fall 2021, the program’s most since 2000 and fifth-most in a single season in program history. Valpo ranked 15th nationally in FCS and led the PFL in sacks per game at 2.91. Valpo was also among the national leaders in tackles for loss per game at 7.3, ranking 15th in FCS. The team’s 80 TFLs were its most since 1984 and the second most in program history. Valpo had 18 tackles for loss in a single game vs. Presbyterian, tied for the most in the Division-I nation (FCS and FBS). The team’s 10 sacks vs. the Blue Hose were tied for the fifth most in FCS. Valpo had its highest single-game TFL total since at least 2004 and the program’s first double-figure sack total in over 20 years. Valpo had two safeties in a single game vs. Dartmouth, the first time the program recorded two safeties in the same season – let alone the same game – since 2006.

Offensively, Fox’s squad scored 298 points during the Fall 2021 campaign, the fifth most in program history. The team rushed for 23 touchdowns, the third most in the program record book and most since 1971. Valpo’s eight rushing TDs vs. Presbyterian shattered a single-game program record. In addition, Valpo finished the season as the only team in FCS and one of four teams in all of Division-I college football (joining Army West Point, Oklahoma State and Michigan) with eight rushing TDs in a single game. Robert Washington became the third 1,000-yard rusher in program history and finished the season with 1,105 rushing yards, second in Valpo lore. He finished in the top 10 nationally in FCS in rushing yards per game and total rushing yards while tying the program record for single-season rushing TDs with 14.

During his second season at the helm in Spring 2021, Fox was a finalist for the Eddie Robinson Award – which is presented annually to the FCS National Coach of the Year – after guiding Valpo to its best winning percentage since 2003 and tying for the squad’s best winning percentage since 1999. He led his team to Pioneer Football League runner-up honors, the program’s highest finish in the league standings since the PFL championship season of 2003.

Under Fox’s leadership, Valpo student-athletes thrived both academically and athletically during the Spring 2021 season. He helped five players garner all-PFL First Team honors, the program’s most since 2005. In addition, Valpo placed 56 student-athletes on the academic honor roll, a 15 student-athlete jump from the previous year and the second-most in program history. Despite the shortened schedule due to the unique spring slate caused by the COVID-19 pandemic, Valpo won four PFL games in the same season for the second time ever (five, 2017) and four league games in any conference for just the second time since 1968. The Brown & Gold held its best record through the first six games of a season (in this case, the only six games of a season) since 1999 and its best record through six league games since 1964.

During the historic Spring 2021 campaign, Fox’s squad beat rival Butler twice in the same season for the first time in program history. The team also snapped a 17-game head-to-head losing streak to Drake, beating the Bulldogs in Des Moines for the first time ever and in any location for the first time since 2003. The memorable season closed with an upset victory over San Diego, a team that was receiving votes nationally in the latest STATS FCS Top 25 and AFCA Coaches Top 25 polls at the time of the matchup. The Toreros, who were nationally ranked earlier in the season, incurred just their second loss in their last 42 PFL games at that time. The Week 6 effort against San Diego helped Fox’s team earn STATS FCS Perform National Team of the Week Honorable Mention.

Fox’s defensive roots paid dividends on that side of the football in his second year at the helm, as the team enjoyed its best defensive season in four decades. Valpo held opponents to 283.3 yards per game, the program’s best total defense in the last 40 years. Valpo limited the opposition to 172.2 passing yards per game, the program’s best passing defense since 2008. In addition, the squad boasted its best rushing defense (111.2 yards per game) and scoring defense (18.7 points per game) since 1999. Fox recruited and instructed a finalist for the FCS National Freshman of the Year Award who led the FCS nation in takeaways and was the lone rookie on the All-PFL First Team.

On the offensive side of the ball, Fox’s Spring 2021 team eclipsed 150 rushing yards per game for the second time in the last 12 seasons and first since 2014. Valpo outrushed opponents 910-688, its first time gaining more yards on the ground than the opposition since 2007. Fox recruited and instructed the first PFL Offensive Player of the Year in program history. On special teams, Fox’s squad boasted its best field-goal percentage in over 15 years, had its punter tie the program and PFL records for single-season punting average and featured the FCS leader in kickoff return average. In addition, Valpo had a semifinalist for National Punter of the Year who also won the co-PFL Special Teams Player of the Year distinction, the first Valpo player to receive that honor.

During his first season as the head coach at Valpo, Fox’s leadership made an immediate impact on the defensive side of the ball. He oversaw a unit that had a knack for dropping opponents behind the line of scrimmage as Valpo racked up 70 tackles for loss, the program’s most since 2007 and tied for the fourth-most in a single season in program history. Valpo had seven or more tackles for loss in four different games, a feat the team had achieved just once in the previous three seasons combined.

Fox helped defensive back Jamari Booker rack up 101 tackles and five interceptions during his senior season in 2019, earning All-PFL Second Team honors. Booker was named the PFL Player of the Week, STATS FCS National Defensive Player of the Week and College Sports Madness National Defensive Player of the Week after a 13-tackle, two-interception performance against Stetson. Booker then became the second PFL player since 2002 with multiple career games of 20 tackles or more by achieving 21 on Nov. 2 at Davidson. Booker finished third in the league in tackles per game (8.4), second in total tackles (101) and third in interceptions (five).

Fox also instructed seven All-PFL Honorable Mention recipients and three Academic All-PFL Second Team honorees during his first year in charge of the team. His first victory as a head coach came on Oct. 26, 2019 as Valpo topped Stetson 19-10. Fittingly given Fox’s defensive background, his first win came behind a dominant defensive showing as Valpo allowed 10 points or fewer in a game for just the fourth time in a 19-year span. Stetson entered the contest ranked first in the FCS nation in total offense. The Hatters came into the game with a 5-1 record, the first time Valpo beat a team that stood at 5-1 or better since 2003.

Prior to arriving at Valpo, Fox was already no stranger to the Pioneer Football League, as he has spent the previous 11 years as the defensive coordinator and secondary coach at the University of Dayton under head coach Rick Chamberlin. During that time, the Flyers compiled an 86-38 record, won three PFL championships and participated in the 2015 FCS playoffs while making defense a hallmark of the program.

During Fox’s time as defensive coordinator, Dayton held opponents to an average of 19 points per game. The defensive backfield produced one All-American, four Academic All-Americans, two PFL Special Teams Players of the Year and had three corners invited to NFL Rookie Minicamp. He helped the team finish with 10 winning seasons in his 11 years on staff.

Accruing Top 10 national rankings in defensive statistical categories remained the norm in 2013, when the team ranked fourth in fourth-down defense. In 2014, Dayton was ninth nationally in third-down defense and 10th in pass efficiency defense before the 2015 squad ranked second in passes intercepted, fifth in blocked kicks and 10th in turnovers gained. The Flyers led the nation in passes intercepted in 2016 while also ranking fifth in blocked kicks, sixth in turnovers gained, eighth in pass efficiency defense and 10th in both red-zone defense and fourth-down defense.

After again ranking in the Top 5 nationally in blocked kicks in 2017, Dayton boasted the second-best scoring defense in the PFL in 2018.

Prior to joining the Flyers staff, Fox served as the linebackers coach and special teams coordinator at Wayne State University in Detroit from 2005-2007. His special teams unit ranked fourth nationally in Division II in kickoff returns in 2008.

Fox’s resume also includes stints as a defensive graduate assistant at Ball State University (2004), Dayton (2002-2003) and Lakeland College (2001). He began his coaching career as an assistant varsity coach at Preble Shawnee High School in Camden, Ohio during the 2000 season.

During his playing days, Fox was a team captain and all-conference performer at Defiance College in Defiance, Ohio from 1995-1999. He graduated from Defiance with a degree in physical education and health in May 2000 before earning his master’s degree in education from Lakeland in May 2002.

Fox and his wife Rhonda have a daughter, Riley, and a son, Logan.