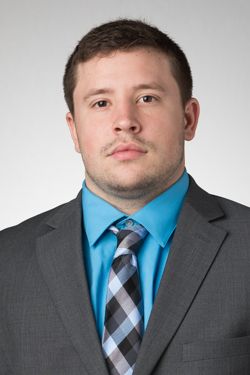 Zach Carney joined the Valpo football staff as a defensive line assistant for the 2019 season. He works with the team's defensive tackles.

Carney came to Valpo immediately following his collegiate career as he recently graduated with a degree in sports business and coaching from the University of Mount Union in Alliance, Ohio. At Mount Union, Carney was a two-time national champion and was part of a team that lost only one regular-season game in his four years. A three-year letter winner, he was also a two-time member of the school’s honor roll.

What They’re Saying About Coach Carney

Tom Bradley, Pittsburgh Steelers Defensive Backs Coach: “Zach is going to be a great football coach. He has all of the attributes needed in this profession. He is dedicated, knowledgeable and willing to work at all the little things. His players will respect his demands for them to excel not only on the field, but in the classroom and in the community.”

Vince Kehres, University of Mount Union Head Coach: “Zach is a great young man with a passion for football who I’m confident will make a great addition to the staff at Valpo. He understands how to persevere and grind out good days. Zach will bring a high level of energy and enthusiasm each day.”

Chris Kappas, University of Mount Union Offensive Coordinator: “Zach is a hard worker with a great football mind and a passion for the game.”