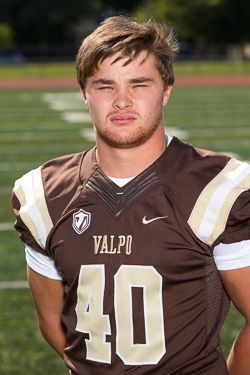 Prep: Played varsity for three years and earned four letters… Member of the all-conference and all-area squads… Helped his team to an impressive 54-1 record through his four-year career… Top performance featured 13 tackles, three TFL, an interception and a forced fumble… Also competed in three years of track & field and wrestled for one season… Achieved honor roll all four years of high school.

Personal: Majoring in sport management… Son of Jennifer and David Vargas… Has three brothers, Alex, Zach and David, and one sister, Alaina… Brother Zach played football at UW Oshkosh in 2017 and brother Alex wrestled at Iowa from 2012-2015... Started a book donation in his community with his twin brother to help get books to low-income citizens. Some books have been sent to Mexico and Jamaica.