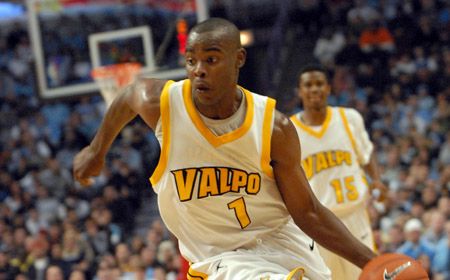 Playing with just six scholarship players Saturday afternoon at Loyola, Valparaiso showed determination in fighting back to within five points with under six minutes remaining, but that was as close as the Crusaders would get, as the Ramblers closed out a 71-56 victory.

“I am really proud of the effort and determination out of our guys today,” said Crusader head coach Homer Drew.  “Knowing we were coming in short-handed, every one of our guys played hard right up to the final whistle and kept the game a lot closer than the final score indicated.”

The Crusaders utilized their balance early on, as five of their six players scored in the first ten minutes of the game.  Cameron Witt (Launceston, Tasmania, Australia/Launceston College) and De’Andre Haskins (Long Beach, Calif./La Lumiere [Ind.] School) each hit early jumpers, while Howard Little (Chicago, Ill./Stoneridge [Calif.] School) knocked down a 3-pointer.  Trailing 8-7, Witt found Michael Rogers (Kingston, Jamaica/Redemption [N.Y.] Christian) for a layup, and Logan Jones (Madison, Ind./Madison) followed with a coast-to-coast layup off a Little block to make it 11-8 Valpo with 10:15 remaining in the first half.

Loyola would respond with 13 of the next 15 points over a 3:30 span, however, to take an eight-point lead.  Justin Cerasoli, who closed the first half with 18 points, keyed the run with a pair of triples, and a 3-point play by Walt Gibler gave the Ramblers a 21-13 lead with 7:16 to play in the half.  They extended the lead to as many as 11 points on a fast-break jumper by J.R. Blount before Valpo put together one last spurt to close the half.

Jones started the run with a triple with 3:22 remaining in the opening stanza off a pass from Jake Diebler (Upper Sandusky, Ohio/Upper Sandusky) to cut the deficit to eight.  Aric Van Weelden split a pair of free throw attempts for the Ramblers, answered by a split at the stripe from Witt.  On Loyola’s next possession, it had five attempts at a basket, but missed four shots and the Crusaders forced a turnover, which Haskins converted into three points on the other end.  Rogers would hit one of two free throws to end the scoring in the half, as Valpo found itself within 30-26 at the break.

Loyola scored the first six points out of halftime to push its lead back to double figures and maintained a lead at or near the double-digit mark for most of the second half.  A 3-pointer by Rogers off a feed from Diebler with just under 14 minutes remaining cut the Rambler advantage to 40-34, but Loyola found its way inside for three straight layups to push the lead back up to 12 points.

The lead extended to as many as 13 with 8:48 to play and was still 54-42 with seven minutes remaining before the Crusaders pushed one last time.  Rogers got to the line and hit both ends of a one-and-one, and after a Diebler steal, the sophomore from Jamaica knocked down a triple to cut the Loyola edge to seven.  Diebler came up with another steal on the defensive end that was converted into a Little fast-break layup to make it 54-49 with 5:52 to play and forcing a Loyola timeout.  But out of the stoppage, the Ramblers hit shots on each of their next three possessions to cement the game.

Rogers led the Crusaders with 16 points to lead three Crusaders in double figures.  Little connected on 5-of-7 attempts from the floor for 12 points, while Witt scored ten points for the second straight contest.  The freshman also posted team highs of seven rebounds and four assists.

Cerasoli paced Loyola (11-8, 3-4 Horizon) with 28 points on 11-of-19 shooting, while Blount was the only other Rambler to finish in double figures, connecting for 15 points.  Van Weelden led all players on the boards with 11 rebounds.

“I thought there were two main keys to Loyola’s victory,” said Drew.  “The first is their rebounding (42-23 advantage, including 20-8 offensively) allowing them to get 20 second-chance points.  The second was our 16 turnovers.  We needed to keep that number closer to eight or ten today.”

Valparaiso (5-14, 2-6 Horizon) returns home to the Athletics-Recreation Center on Thursday evening for a Horizon League contest against Milwaukee at 7:05 p.m.  As always, all the action can be heard live on the Valpo Sports Radio Network (WVUR, 95.1 FM, Valparaiso; WAKE, 1500 AM, Valparaiso; WEFM, 95.9 FM, Michigan City) and online at www.valpoathletics.com.  Live video and statistics will also be available through the official Crusader website.  The game will also be televised live throughout Chicagoland on Lakeshore Public Television and is also accessible on ESPN Full Court.