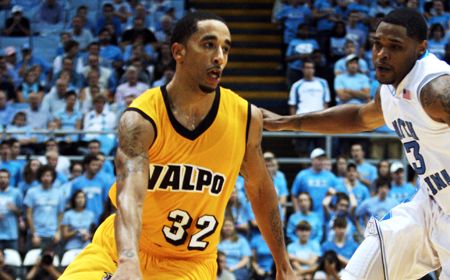 Valparaiso held a 67-56 lead with just over six minutes to play Tuesday evening in Fort Wayne, Ind., but host IPFW ended the game on a 19-5 run to defeat the Crusaders by a 75-72 count.

The Crusaders moved their lead into double figures after their second big run of the second half.  The first spurt came early in the second stanza, as the two teams were trading the lead back and forth after IPFW held a two-point halftime lead.  The Mastodons got a layup with 14:13 to play to move back ahead 44-43, but Valpo would score the next ten points to move decisively into the lead.

Cory Johnson (Duluth, Minn./Duluth East [Iowa State]) started the run with a pair of free throws and followed on Valpo’s next possession by getting to the line again and knocking down two more.  After a steal, Brandon McPherson (Indianapolis, Ind./Lawrence North) drew a foul and knocked down two charity stripe attempts of his own.

On the fast break next time down, McPherson found Michael Rogers (Kingston, Jamaica/Redemption [N.Y.] Christian) for a layup.  The Crusaders came up with another steal on their next defensive possession and again turned it into points on the offensive end, as Johnson got loose for a layup inside to close the 10-0 spurt and give Valpo a 53-44 lead with 11:34 to play.

IPFW fought back to within three points at 57-54 with 9:07 remaining, but again the Crusaders put together a run to attempt to take control.  Johnson started this spurt again with another layup, and Brandon Wood (Kokomo, Ind./Kokomo [Highland C.C./Southern Illinois]) knocked down a 3-pointer on the next Valpo trip.

An IPFW layup briefly slowed the Crusader momentum, but two possessions later, Wood knocked down a mid-range jumper to push the lead back to eight.  After the Mastodons came down with two offensive rebounds on their next possession, Matt Kenney (Mooresville, Ind./Mooresville) made a big defensive play to come up with a steal and found Wood on the fast break for another trifecta to give Valpo its biggest advantage at 67-56 with 6:11 to play.

But it was from that point on that IPFW closed the game on the decisive 19-5 run.  Valpo went just 1-for-6 from the floor over the last six minutes while also committing six turnovers, including four in the game’s final 90 seconds.  The Mastodons scored the last ten points to finish things off, including a Deilvez Yearby layup with 1:07 to play that pulled them within one and a Zach Plackmeier jump with 26 seconds left that took the lead from the Crusaders for good.

“I was really pleased with the way we played most of the second half,” said Crusader head coach Homer Drew.  “We came out and extended our lead well behind good efforts from both Brandon and Cory.  You have to credit IPFW’s defense for giving them the chance to come back in the final minutes.  I thought those final minutes showed some immaturity and inexperience in our young players.  This was the first game that we have had that’s gone down to the wire, so hopefully it is a good learning exp for our young guys to handle pressure late.”

The first half was a disjointed affair, as neither team came out shooting the ball well, with the first field goal not being hit until over five minutes into the game.  Both teams also struggled with early foul trouble, as 25 fouls and 32 free throws were registered in the opening 20 minutes.  IPFW held the lead for the majority of the first half and went into the locker room with a 32-30 lead after a second-chance basket by Antwone Snead in the waning seconds of the half.

Valparaiso (5-7) returns to action following the Christmas holiday, traveling to Akron on Sunday in the return game from last year’s BracketBuster victory.  Game time is set for 1 p.m., and as always, the game can be heard live on the Valpo Sports Radio Network (WEFM, 95.9 FM, Michigan City; WAKE, 1500 AM, Valparaiso; WLPR, 89.1 FM, Merrillville) and online at www.valpoathletics.com, which will also have a link for live statistics.