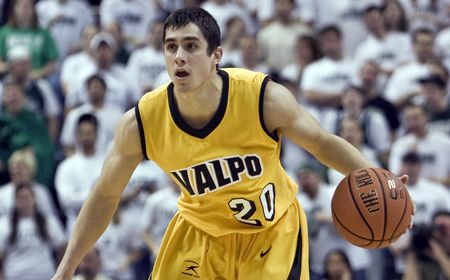 The Matchup: Valparaiso returns to the national television stage on Friday evening, as the Crusaders travel to Detroit to take on the Titans live on ESPNU in Horizon League action.

Last Time Out: An evenly-matched game didn’t fall Valparaiso’s way Saturday night at the Athletics-Recreation Center, as the visiting Phoenix of Green Bay hit ten of its 12 free throw attempts in the end stages of the contest to hold off the Crusaders, 64-58.   A 10-0 run over a seven-minute span gave Valpo a 50-48 lead with 5:49 to play, but the Crusaders couldn’t extend the advantage to more than two points and Green Bay took back the lead for good with 3:02 to play.  Brandon Wood paced the Crusaders with 18 points and eight rebounds on Saturday, while Cory Johnson chipped in 14 points, including an 8-of-9 effort from the charity stripe.  Howard Little was the third Crusader in double figures, closing the night with ten points, five rebounds and three steals.

Series History: The Crusaders are even at 5-5 in the all-time series with Detroit, but are 3-1 against the Titans since joining the Horizon League prior to the 2007-2008 campaign.  In the two squads’ last meeting, which came in Detroit on Feb. 7, 2009, the Titans’ Woody Payne split a pair of free throws with 2.3 seconds to play to give Detroit a 56-55 victory.  Michael Rogers led the Crusaders with 12 points while Little scored 11.

Following the Crusaders:  Friday’s game can be seen live nationwide on ESPNU, with Michael Reghi and Jim Chones on the call of the game.  If you can’t get to a TV, as always, the game can be heard live on the Valpo Sports Radio Network (WAKE, 1500 AM, Valparaiso; WEFM, 95.9 FM, Michigan City; WLPR, 89.1 FM, Merrillville).  Veteran broadcaster Todd Ickow returns for his 19th season on play-by-play for the Crusaders, while Valpo alumnus Andy Viano will handle the color commentary.  Links for the VSRN audio as well as live statistics can be found at www.valpoathletics.com.

Change of Pace: The start of Horizon League play has brought a different style of play for the Crusaders to contend with.  In non-league action, Valpo averaged over 70 possessions per game and scored 74.6 PPG while giving up 75.8 PPG.  But in the Crusaders’ three league games so far, they have had their three slowest-paced games of the year, with just 61 possessions apiece against Butler and Milwaukee and 62 versus Green Bay.  The lower number of possessions, in addition to slightly lower shooting percentages, is a big part of the reason for the reduction in scoring, as Valpo is averaging just 60 PPG and giving up just 67.3 PPG in league action.

Turnovers Key: With fewer possessions, each one becomes that much more important, a theory which played out last week in Valpo’s two league games.  Against Milwaukee, the Crusaders forced 19 turnovers while committing just 15 and held a 24-13 edge in points off turnovers, with every point proving important in their one-point win.  Against Green Bay, however, Valpo forced just nine turnovers and committed 13 of its own in a six-point loss.

Finding a Way to Win: Valparaiso, which entered the week as the highest-scoring offense in the Horizon League, scored just 55 points last Thursday night against Milwaukee, its lowest scoring output of the season.  It was the lowest-scoring effort in a win by a Crusader team since Jan. 4, 2005, when Valpo edged Western Illinois in Mid-Con play, 54-51.

Game-Winning Shot: Brandon McPherson’s steal and subsequent game-winning layup against Milwaukee was Valpo’s first deciding basket on its final possession since March 1, 2008 against Wright State.  The game against the Raiders saw Jarryd Loyd feed Shawn Huff for a 3-point play with 1.6 seconds to play in overtime, giving the Crusaders a 75-73 victory.

Multiple-Threat Offense: The Crusader offense, which leads the Horizon League with an average of 71.7 points/game, has four times this season featured two players with 20 or more points in the same game.  Brandon Wood went for 25 in the season opener at Ball State and was joined by Cory Johnson with 21 points.  Wood then dropped 30 on #6/4 North Carolina while Brandon McPherson scored 20 as well.  Most recently, Wood tallied 21 points and Johnson 20 against Concordia, and the duo went for 23 and 22 points, respectively, at IPFW.

Division I Scoring Record: Since Valparaiso made its move to the Division I ranks in the late 1970’s, the Crusaders have had a number of players who could fill up the scoring column.  Names like Lubos Barton, David Redmon, Casey Schmidt, Tracy Gipson, Raitis Grafs, Dan Oppland and of course Bryce Drew reside atop the Crusaders’ career points and points per game charts.  None of them, however, have scored as many points in a single game as Brandon Wood did Nov. 27 at Georgia Southern.  Wood connected on 13-of-18 from the floor, including three 3-pointers, and 10-of-12 from the foul line to score a Valpo Division I record 39 points, also setting a new Legends Classic single-game scoring mark.

Wood Scores in Bunches...: Redshirt sophomore guard Brandon Wood has proven to be among the most prolific scorers the Crusaders have seen in their D-I history, scoring 30 or more points twice already to join Bryce Drew and Dan Oppland as the only players in the last 15 years to score 30 multiple times in a career.  Wood, who currently paces the Horizon League and is 21st in the nation with 20.3 points/game and also ranks third in the league in field goal percentage, also has reached at least 20 points on six other occasions, including a game-high 22 points in Valpo’s thrilling win over Milwaukee.  He also has paced Valpo in five straight games in the scoring column, most recently with 18 points against Green Bay.

...and Rebounds as Well: Not to be overlooked, the redshirt sophomore has also been a force on the glass in recent games.  Wood paced the Crusaders with eight rebounds versus the Phoenix and over the last seven games is averaging 6.3 rebounds/game.  On the year, Wood has posted 5.1 rebounds/game, good for 13th in the league rankings.

39:59.1: That’s how long it took fifth-year senior Brandon McPherson to connect on his first field goal of the game last Thursday against Milwaukee, as after missing his first four attempts, McPherson became the hero with his last-second steal and subsequent game-winning layup, the first game-winner of his collegiate career.  McPherson, who is third on the team with 10.5 points/game, handed out seven assists over last week’s pair of games as well and now has 252 career assists, 15th in Crusader history.

Johnson Works Down Low: Redshirt junior Cory Johnson has been among the Crusaders’ most consistent players this season, pacing Valpo on the glass in nine games and reaching double figures in scoring on 13 occasions.  Most recently, Johnson posted 14 points against Green Bay, including an 8-for-9 effort from the foul line.  On the year, Johnson ranks second in the league in field goal percentage (.567), sixth in scoring (15.1 PPG) and seventh in rebounding (6.1 RPG).

Kenney Steps Up: Freshman guard Matt Kenney played a career-high 26 minutes against Milwaukee last Thursday and made the most of his PT, connecting on 4-of-5 shots from the field, including a pair of triples, en route to ten big points.  The freshman has been superb this year at handling the basketball, dishing out 33 assists through 15 games while committing just nine turnovers, an assist/turnover ratio of 3.67.  His ratio is sixth-best nationally among all players averaging at least two assists/game.  In fact, over the last nine games, the freshman has handed out 21 assists and only totaled four turnovers.

Quickly: Junior guard Howard Little reached double figures for the fifth time this season last time out against Green Bay, scoring ten points while also recording five rebounds and three steals ... ten different players have started at least one game for the Crusaders this year, with eight players starting at least five times ... Valpo struggled to its second-worst 3-point shooting performance of the year against Green Bay (4-for-17, .235) after hitting 7-for-15 (.467) two days earlier against Milwaukee ... the Crusaders have connected on 75.9% (41-for-54) of their free throws over the last three games.