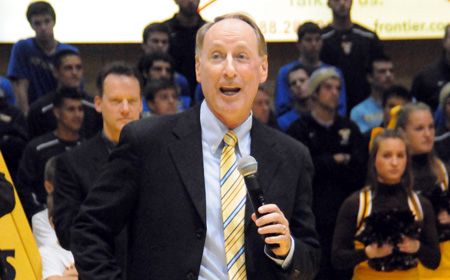 Valparaiso men’s basketball head coach Homer Drew looked on as the new court in the arena of the Athletics-Recreation Center was officially dedicated as Homer Drew Court Saturday night, and then guided the Crusaders to a comfortable 93-58 victory in their exhibition opener against Olivet Nazarene.

The ceremony to dedicate the court occurred prior to the game, featuring a blessing of the new surface by university pastor James Wetzstein and a proclamation delivered by Horizon League commissioner Jon LeCrone declaring October 30, 2010 as “Homer Drew Day” throughout the league.  Valparaiso University president Mark Heckler then stepped to the podium and made the official announcement of the dedication, as former and current Crusader players stepped away to reveal Homer Drew Court in script in front of the Valpo bench.  Drew then spoke to the crowd for about 10 minutes to close the dedication ceremony.

Once the game started, both teams were connecting from deep early on.  Sophomore Ryan Broekhoff (Frankston, Victoria, Australia/Australian Institute of Sport) and junior Brandon Wood (Kokomo, Ind./Kokomo [Highland C.C./Southern Illinois]) both connected on early 3-pointers for the Crusaders, but Olivet Nazarene also hit a pair of early triples.

A free throw by Chuck Rideout just under four minutes into the game kept the Tigers within one point at 8-7, but the Crusaders quickly extended the lead by leaps and bounds.  An 8-0 spurt, featuring a fast-break dunk by senior Cory Johnson (Duluth, Minn./Duluth East [Iowa State]), pushed the Valpo advantage to 16-7 with 12:53 to play in the opening half.

Then the Crusaders started nailing 3-pointers from all over the court.  Over the next three and a half minutes, Valpo attempted six triples and connected on five of them.  Senior Michael Rogers (Kingston, Jamaica/Redemption [N.Y.] Christian) started the deluge from downtown, and out of a media timeout Broekhoff knocked down his second 3-pointer of the game.  Senior Howard Little (Chicago, Ill./Stoneridge [Calif.] School) added a triple of his own, and two possessions later Broekhoff hit yet another from behind the arc.

Freshman Jay Harris (Aurora, Ill./Oswego East) got in the act as well, capping the run of 3-pointers before picking up three points the unconventional way, hitting all three free throws after getting fouled while shooting from beyond the arc.  Harris’ freebies capped a 26-7 Valpo run that put the Crusaders ahead 34-14 with 8:53 to play in the opening half.

With the lead still 20 points later in the half, Wood scored seven and Broekhoff hit yet another trifecta and a pair of free throws during a12-2 run that made the lead 51-21 with 2:33 to play in the opening stanza.  But ONU closed the half with nine straight points of its own to cut the Crusader advantage to 51-30 at halftime.

The Crusaders maintained a lead right around 20 points over the Tigers for the first six minutes of the second half before doing the exact opposite of their first-half run for a second-half spurt, exploiting the area around the basket.  The run started with a fast-break layup by Wood off a steal by Rogers, and Johnson followed with a close-range bucket.

Another fast-break layup, this time by Rogers from Wood, and a free throw by Broekhoff extended the lead to 68-43 with 12:19 to play.  Wood then found Broekhoff ahead of the pack after pulling down a defensive board for a fast-break dunk, and on Valpo’s next possession, freshman Hrvoje Vucic (Split, Croatia/Faust Vrancic) grabbed an offensive rebound and laid it back in.  Rogers and Wood would each add another layup to cap a 19-4 run over a span of 5:24 to give the Crusaders an 80-45 lead with 8:47 remaining, and Valpo would cruise from there.

Ten different Crusaders played Saturday night, with nine players earning between 16 and 26 minutes of playing time.  All five Valpo starters ended the game in double figures, led by 20 points from Wood, who added a team-high four assists.  Broekhoff and Johnson each chipped in 18 points, with the former leading the Crusader effort on the boards and on the defensive end as he finished with seven rebounds, seven blocked shots and five steals.

“It was a wonderful team effort for us tonight, finishing with five players in double digits,” said Drew.  “Ryan really set the tone defensively with his blocks and steals.  He and Brandon both really shot the ball well for us as well.”

Little, who also grabbed six rebounds, and sophomore Erik Buggs (Memphis, Tenn./Mitchell) chipped in 10 points apiece as well in the winning effort.  Valpo knocked down 11 3-pointers Saturday and connected on 22-of-28 (78.6%) from the free throw line.  The Crusaders dished out 20 assists on 30 baskets and committed just 10 turnovers while registering 15 steals and nine blocks.

“I thought Mike really supplied us a lot of energy,” said Drew.  “Defensively, we were becoming a bit stagnant in the second half, and he came in and definitely helped get us the momentum with his play on that end of the floor.  This was probably his most consistent performance over the course of a game for us.”

Jake Hasselbring led Olivet Nazarene, an NAIA squad which was also playing the game as an exhibition contest, with 16 points off the bench.  Antonio Marshall added 13 points for the Tigers, while Nick Klomstad pulled down a team-best seven rebounds.

Valparaiso closes out the exhibition season next Saturday at the ARC against Aurora.  Tipoff is scheduled for 4 p.m., with live audio and video webcasts available at www.valpoathletics.com.  The audio broadcast will also be available locally on WVUR, 95.1 FM, while live stats will also be running through the official Crusader website.