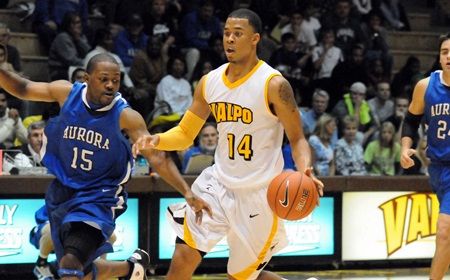 Leading 49-48 with 8:37 to play Saturday afternoon, Valparaiso locked down defensively, holding Loyola scoreless as part of a 12-0 run over a nearly seven-minute stretch as the Crusaders eventually earned a 66-56 win in Chicago.  The win gives Valpo a four-game winning streak and moves the Crusaders to 2-0 at the conclusion of the first weekend of Horizon League play.

“I'm very, very proud of our team today,” said Crusader head coach Homer Drew.  “To come to Chicago and come from behind to win Thursday night and then make the quick turnaround to this afternoon and play as well as we did, the team really deserves a lot of credit.  Obviously the key was going from up one at the eight-minute mark and holding Loyola scoreless for almost seven minutes, and I thought we had five guys on the floor really working hard defensively and doing a great job to extend our lead.”

The Crusaders never trailed in the second half, but were tied once and had their lead cut down to one possession on a number of occasions by the Ramblers.  Every time, though, Valpo had the answer to keep Loyola at bay.  The Ramblers scored the first two baskets out of the locker room to start the half to cut a six-point halftime deficit to two, but sophomore Ryan Broekhoff (Frankston, Victoria, Australia/Australian Institute of Sport) nailed a 3-pointer on Valpo's next possession to push the lead back to 37-32 with 16:12 to play.

Just under two minutes later, Andy Polka moved Loyola within 37-36 with an old-fashioned 3-point play, but redshirt junior Brandon Wood (Kokomo, Ind./Kokomo [Highland C.C./Southern Illinois]) hit a floater to move the lead back up to three points.  Terrance Hill hit a triple on the Ramblers' next trip to tie the game at 39-all, but Wood responded with a reverse layup and then freshman Jay Harris (Aurora, Ill./Oswego East) came up with a follow basket on a fast break to give the Crusaders a 43-39 edge with 12:42 to play.

Hill came up with a 3-point play for Loyola on its next possession to again move his team within one point.  This time, though, it was fifth-year senior Cory Johnson (Duluth, Minn./Duluth East [Iowa State]) with the big play, getting a putback basket as he was fouled for a 3-point play of his own.  Just under two minutes later, Ben Averkamp knocked down a 3-pointer for the Ramblers to cut the Valpo lead to 46-45, but Johnson answered immediately with a 3-ball of his own to again make the lead four points.

Loyola got a basket and then split a pair of free throws to move within one point one last time at 49-48 with 8:37 to play, but that was when the Crusader defense started to lock down the Ramblers.  Valpo held Loyola without a point on the next ten trips down the court, forcing the Ramblers into 0-of-8 shooting from the floor over that stretch.

Meanwhile, the Valpo offense slowly extended the lead.  Johnson split two pairs of free throws over the next few minutes, while senior Howard Little (Chicago, Ill./Stoneridge [Calif.] School) also split a pair of pair from the charity stripe and worked a nice give-and-go with sophomore Matt Kenney (Mooresville, Ind./Mooresville) for a layup during the run.  Perhaps the biggest basket came with just over four minutes to play, as with the shot clock winding down, Broekhoff drove into the lane and hit a tough fadeaway jumper from about 14 feet to push the advantage to 56-48.

A reverse layup by Johnson off an inbounds play gave Valpo a double-digit lead for the first time with 3:28 to play.  Redshirt sophomore Erik Buggs (Memphis, Tenn./Mitchell) split a pair of free throws of his own, and then Broekhoff knocked down both his attempts from the charity stripe to finish off the 12-0 run.  Polka hit a pair of free throws to snap the Ramblers' scoreless drought with 1:46 to play, but Valpo never led by less than 10 points the rest of the way.

The Crusaders got off to a quick first-half start for the first time in the last few games, getting nine points apiece in the first 20 minutes from Little and sophomore Kevin Van Wijk (Hoofddorp, Netherlands/Katholieke Scholengemeenschap Hoofddorp) and eight points from Wood to help claim a 34-28 halftime edge.  Valpo's lead, which had been as much as eight in the opening stanza, was cut to one by Loyola at 28-27 with 2:42 remaining in the first half.  But the Crusaders closed the first half on a 6-1 spurt, thanks to a pair of free throws by Van Wijk and baskets by Wood and senior Michael Rogers (Kingston, Jamaica/Redemption [N.Y.] Christian), to lead by six at the break.

Little took advantage of seven free throws to pace the Crusaders in scoring with 16 points, also knocking down four of his five attempts from the floor.  The senior also grabbed seven rebounds, while Johnson added 14 points and a game-high eight rebounds.  Wood was the third Valpo starter to finish in double figures, scoring 12 points on the afternoon.

“I thought Cory, Howard and Matt really did a tremendous job fighting inside against Loyola,” said Drew.  “They were just warriors inside to help us finish with a plus-10 edge in rebounding.”

Valparaiso (6-2, 2-0 Horizon) is done with league action until New Year's Day, and will return to the court Tuesday evening at the ARC when it hosts #22/18 Purdue at 8 p.m. live nationwide on ESPNU.  The sold-out contest can also be heard on the Valpo Sports Radio Network (WAKE, 1500 AM, Valparaiso; WEFM, 95.9 FM, Michigan City; WJOB, 1230 AM, Hammond) and online at www.valpoathletics.com, which will also have a link for live stats.