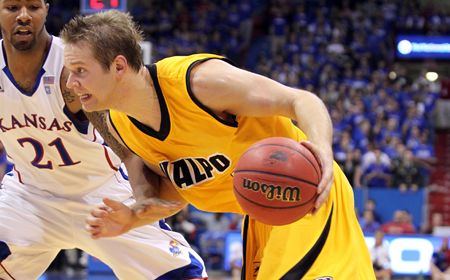 Valparaiso moved into a share of first place in the Horizon League as fifth-year senior Cory Johnson (Duluth, Minn./Duluth East [Iowa State]) led the Crusaders with 20 points in a 64-58 victory over Cleveland State Sunday afternoon at the Athletics-Recreation Center.

The Crusaders rallied from a double-digit first-half deficit for the win Sunday after the Vikings, one of their higher-profile victories in recent years.  Cleveland State entered the week ranked #1 in the Mid-Major Top-25 poll and was receiving votes in both the AP and Coaches’ Top-25.  In addition, the Vikings entered the day 24th in the nation in RPI, Valpo’s best victory based on RPI since downing Milwaukee (20th) at the ARC on Dec. 11, 2004.

Johnson followed up a 26-point effort Friday night with another stellar performance in the scoring column Sunday, knocking down nine of his 12 attempts from inside the 3-point line en route to his 20 points.  Johnson, who tied for game-high honors, was the only Crusader to finish in double figures, but got plenty of help, as six other Valpo players scored at least five points.

Sophomore Ryan Broekhoff (Frankston, Victoria, Australia/Australian Institute of Sport) knocked down a triple in the game’s first minute for the first basket of the contest, but CSU answered with seven straight points and the Crusaders trailed the remainder of the first half.  A pull-up jumper from just outside the paint by senior Michael Rogers (Kingston, Jamaica/Redemption [N.Y.] Christian) brought the Crusaders back to within 9-8 seven minutes in.

It would take over nine minutes for the Crusaders to find the basket from the field again, enabling a 10-0 Cleveland State run over that stretch as the Vikings extended their lead to double figures.  Trailing by 11 with five minutes to go in the half, Johnson connected on a pair of free throws to snap the scoring drought and then redshirt junior Brandon Wood (Kokomo, Ind./Kokomo [Highland C.C./Southern Illinois]) took a feed from Johnson for a layup to cut the deficit to seven.

CSU’s Josh McCoy knocked down a jumper in the paint two trips later to push the Viking advantage back to nine points, but the Crusaders took the momentum into the locker room with the last six points of the stanza as both Johnson and senior Howard Little (Chicago, Ill./Stoneridge [Calif.] School) got second-chance putbacks, followed by a Little feed to Johnson for a layup with 44 seconds to go to cap the first-half scoring.  All told, the Crusaders went on a 10-2 run over the final five minutes of the half, enabling them to go into the locker room trailing by just 21-18.

The second half was the antithesis of the first half in regards to the scoreboard, as after combining for just 16 FGs, five FTs and 39 points in the first half, the two squads totaled 31 FGs, 13 FTs and 83 points in the second stanza.  A layup by CSU’s Trevon Harmon right out of the break opened the scoring, but the Crusaders answered with six straight points on a fast-break layup by sophomore Erik Buggs (Memphis, Tenn./Mitchell) and a pair of layups by Johnson to take its first lead since early at 24-23 with 18:26 remaining.

The game hovered around anywhere from a tie to a four-point Crusader edge for the next few minutes, until a 3-pointer by freshman Jay Harris (Aurora, Ill./Oswego East) with 13:35 to go sparked a Valpo spurt.  Sophomore Kevin Van Wijk (Hoofddorp, Netherlands/Katholieke Scholengemeenschap Hoofddorp) converted an easy inside bucket off a feed from Buggs, Rogers had a free throw and later a layup and Little also scored inside as Valpo went on a 10-2 run to push the lead to 47-38 with 10 minutes to play.

Cleveland State scored five quick points to move back within four with 8:55 remaining, but again Harris stepped up and hit a 3-pointer to start another run.  Johnson had a pair of buckets during this spurt, including a fast-break dunk, while Wood also connected on a triple.  When Harris hit his third 3-pointer of the game with 4:35 to play, it capped a 13-2 run that gave the Crusaders a 60-45 lead.

The Vikings had one big spurt left, scoring the next 12 points as Valpo went scoreless over the next four minutes, and a fast-break layup by Harmon brought CSU back within 60-57 with under a minute to play.  On the ensuing Crusader possession, Little recovered the ball down low after nearly fumbling it out of bounds and hit Broekhoff in the left corner with a one-handed pass.  The sophomore coolly drained his third 3-pointer of the game to make it a six-point game and secure the Valpo victory.

Broekhoff and Harris each hit three triples to score nine points, while Wood added eight points as well for the Crusaders.  Valpo shot 63.3% (19-of-30) in the second half from the field after shooting just 25.9% (7-of-27) in the opening 20 minutes.  Little grabbed a Valpo season-best 11 rebounds and also led all players with five assists, while Wood and Buggs each handed out three apiece.

Harmon led Cleveland State (15-3, 4-2 Horizon) with 20 points, all of which came in the second half after he was saddled with first-half foul trouble.  Aaron Pogue went for 12 points and seven rebounds, including six offensive, while the Crusaders limited Norris Cole, who entered the game leading the league in scoring and steals and second in assists, to just 10 points on 3-of-12 shooting and three assists while forcing six turnovers.  Valpo forced a total of 16 CSU turnovers while committing just 10 of its own on the day.

Valparaiso (12-5, 4-1 Horizon) now sits in a tie with Butler, Detroit and Wright State atop the league standings and will face the latter two schools on its road trip next weekend.  The trip starts at Wright State Friday night at 6 p.m. CST, and all the action can be heard live on the Valpo Sports Radio Network and online at www.valpoathletics.com, which will also have a link for live stats.  The game can also be seen live exclusively at www.espn3.com.