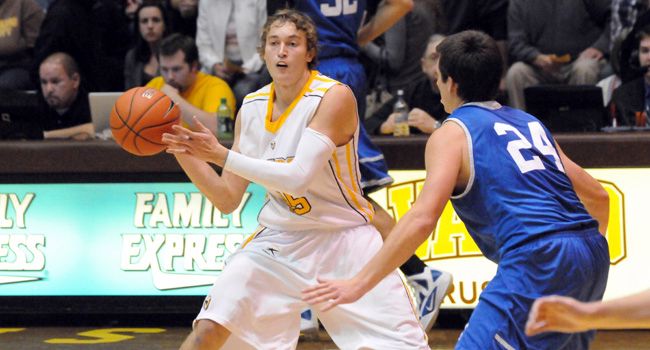 Valparaiso gave head coach Bryce Drew his first win at the helm of the Crusaders, as Valpo led nearly start-to-finish Friday evening in a 90-81 victory over Georgia Southern in Statesboro, Ga.

Playing with just eight scholarship players and nine total players on the trip, Valpo found a way to win thanks in large part to highly accurate shooting inside the arc, as the Crusaders connected on 23-of-31 (.742) of their attempts from 2-point range.  Valpo also took advantage of 45 total trips to the foul line, connecting on 32 free throws.  The Crusaders posted 90 points despite dealing with foul trouble for a good bit of the night, as out of Valpo’s nine players, two ended up fouling out and three others finished with four fouls apiece.

“I’m just really proud of our guys tonight,” said Drew.  “We were nine strong tonight, as only nine guys made the trip.  Those guys found a way to log a lot of minutes and save their best for the last five minutes of the game.  So as a coaching staff, we're just extremely proud of the heart that they showed and the togetherness that they showed in the game’s final stretch.”

Georgia Southern notched the game’s first basket, but the Crusaders scored the next eight points to take the lead for good.  Valpo was able to extend the lead to double figures at 18-8 just 7:11 into the ballgame, and despite Georgia Southern crawling back within six, the Crusaders earned their largest first-half lead of 14 points with 3:44 to go in the stanza.  The Eagles scored 11 straight points late in the half, however, and only a pair of free throws by Richie Edwards (Lakeland, Fla./Lakeland [Hillsborough C.C.]) gave Valpo a 39-34 lead into the locker room for halftime.

A nine-point run early in the second  half helped Valpo push the advantage back up to 13 points, but Georgia Southern kept cutting into the edge and crawled within five points at 60-55 with 10:24 to play.  Again the Crusaders had the answer, pushing the lead back into double figures just two minutes later and going up by 15 points on a 3-pointer by Will Bogan (Boise, Idaho/Vallivue [Ole Miss]) with 4:57 to play.  Valpo used the free throw line to hold off the Eagles, as Georgia Southern (0-1) got no closer than eight points the rest of the way.

Of the eight Crusaders that played on Friday, five scored in double figures, led by a double-double effort from Ryan Broekhoff (Frankston, Victoria, Australia/Australian Institute of Sport).  The junior tallied a game-best 22 points, including a 13-of-16 effort from the foul line, and also tied for game-high honors with 13 rebounds, eight of which came on the offensive end.  Bogan set a new personal Division I high with 19 points in his second game in a Valpo uniform and also handed out four assists.

Matt Kenney (Mooresville, Ind./Mooresville) hit all four of his attempts from the floor en route to 12 points Friday, while Edwards came off the bench to add 12 points and nine rebounds as well.  Kevin Van Wijk (Hoofddorp, Netherlands/Katholieke Scholengemeenschap Hoofddorp) rounded out the quintet of Crusaders in double figures with 10 points to go with seven rebounds, as Valpo owned a 37-28 advantage over Georgia Southern on the glass.

Eric Ferguson led Georgia Southern with 20 points and 13 rebounds, while Ben Drayton III scored 19 points.  The Eagles held the advantage over Valpo in bench points by a 31-18 count, but the Crusaders earned 25 second-chance points to just 11 for GSU.

“Georgia Southern is a much improved team from the last time we played them,” said Drew.  “They’re definitely a program that's on the rise, so this is a quality road win for us tonight.  Now we’re excited to get back to the ARC and get to play our next four games at home.”

Valparaiso (1-1) opens the 2011-2012 home campaign this Monday, Nov. 14 as the Crusaders host Holy Cross [Ind.] College at 7:05 p.m.  All the action can be seen live on the Horizon League Network and heard live on the Valpo Sports Radio Network.  Links for the live video and audio, as well as live stats, will be available at www.valpoathletics.com.