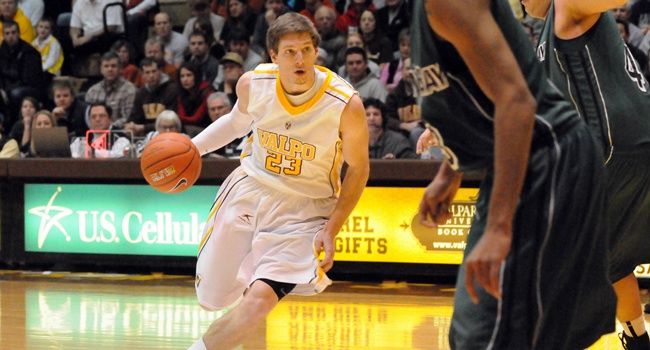 In a high-scoring affair at the Athletics-Recreation Center, it was Valparaiso which ended the game on top, as the Crusaders led by as many as 18 points and eventually held on for a 90-87 victory over Green Bay in a New Year’s Eve matinee Saturday.

“I’m proud of our guys for the way they came out today,” said Crusader head coach Bryce Drew.  “After a tough loss against Milwaukee on Thursday, and then today facing a big run near the end of the game from Green Bay, we could have folded.  I thought it showed the character of our team for them to stick with it and earn the win.”

It was a somewhat unlikely source who paced the Crusaders in the scoring column on Saturday, as junior Matt Kenney (Mooresville, Ind./Mooresville) led Valpo in points for the first time this season.  Kenney, who came off the bench for the first time as a junior, set a new career high with four 3-pointers, part of an 8-for-13 effort from the floor that led him to a 21-point night.

“Matt has played sensationally for us all year,” said Drew.  “Coming into today, we thought the team needed a change, and so we talked to Matt about coming off the bench.  He bought into it and was tremendous, giving us a spark off the bench.  I think it was definitely his best game of the year so far; he stepped up and made some key shots and was great on the drive.”

Three other Crusaders finished the game in double figures as Valpo matched its season-high with 90 points.  Junior Kevin Van Wijk (Hoofddorp, Netherlands/Katholieke Scholengemeenschap Hoofddorp) hit 6-of-7 from the floor and from the foul line to finish with 18 points.  Sophomore Jay Harris (Aurora, Ill./Oswego East) also set a new career best with five 3-pointers made, ending the game with 17 points while also handing out five assists.

“Jay’s been fighting through injuries, and I think he really came out today with one of his best performances of the year,” said Drew.  “He hit 5-of-8 from three, and it seemed like every one of them was a huge shot.  Every time Green Bay made a run, Jay came back with a 3-pointer or Matt got a basket on the drive.”

Junior Ryan Broekhoff (Frankston, Victoria, Australia/Australian Institute of Sport) was his usual steady self, going 7-of-8 from the foul line en route to 15 points.  Broekhoff also paced the Crusaders on the glass with seven rebounds and matched his career high with five steals.

The quartet all had key plays in the final three minutes of the game, coming up big after Green Bay had used a 12-2 run over a five-minute stretch to close within 79-75.  Kenney took it upon himself to provide the offense on the next two trips, putting the ball on the floor and driving inside for layups both times.  His first basket was answered by a Steve Baker 3-pointer for the Phoenix, but the junior was fouled on his second attempt.

The free throw wouldn’t fall, but the Crusaders kept the ball as it was deflected by a Green Bay player out of bounds.  While the possession eventually ended in a turnover, Valpo ran nearly the entire shot clock, leaving just 1:33 on the clock.  The Phoenix would come down and get an inside basket from Alec Brown to cut Valpo’s lead to 83-80, but on the Crusaders’ next trip, they again ran the shot clock all the way down, leaving the ball in Harris’ hands.  Harris stepped up and drilled a 3-pointer over the 7’1” Brown, pushing the advantage to 86-80 with just 28 seconds to play.

The Phoenix raced the ball down and got a Keifer Sykes layup just seven seconds later to move to within four.  Following a Green Bay timeout, the Phoenix came out in a full-court press, which Valpo broke with a perfect pass over the top from Broekhoff to Kenney for a fast-break basket with 17 seconds remaining.

Green Bay got fouled as it raced the ball down again, hitting two free throws to again make it a four-point game, but Van Wijk stepped up after being fouled on the inbounds and hit both ends of the one-and-one to make it 90-84.  The Phoenix’ hopes remained alive after an Aaron Armstead 3-pointer with four seconds to go, and Green Bay would get the ball back, as the Crusaders missed the front end of their next one-and-one, the ball bouncing out of bounds off of Valpo in front of the Valpo bench with one second remaining.  But Green Bay’s three-quarters court inbounds pass was intercepted by Broekhoff to secure the Crusader win.

The Crusaders built a double-digit lead in the first half thanks to a huge run spanning the midway point of the opening period.  Leading by just one at 15-14 six minutes in, Valpo proceeded to outscore Green Bay 21-6 over the next eight minutes to push its lead to 36-20.  Seven different Crusaders scored during the run, which was capped by a beautiful no-look pass from Harris on the fast break to Van Wijk for an easy layup.  The advantage would actually grow to as much as 18 at 49-31 with 1:23 left in the half on a Kenney 3-pointer, but the Phoenix scored the last five points of the half to make it 49-36 at the break.

Until Green Bay’s run late in the second half made it a tight ballgame at the end, the Crusaders did a good job of preventing the Phoenix from closing in on the lead.  The Phoenix cut it to nine just two minutes into the second half, but Valpo scored on four of its next five trips, including a Harris 3-pointer, to again make it a 15-point lead.  Then, after Green Bay had moved within 68-59 with 12:08 to go, Kenney answered immediately with a triple and Harris hit another 3-pointer two possessions later as well.

Valparaiso (9-6, 2-1 Horizon) returns to the road this coming Friday, as the Crusaders continue Horizon League play at Detroit.  The game, set for an 8 p.m. tip, will be video broadcast live exclusively on ESPN3.com.  As always, the Valpo Sports Radio Network will carry the live audio.  Links to the live audio and video, as well as live stats, can be found at www.valpoathletics.com.