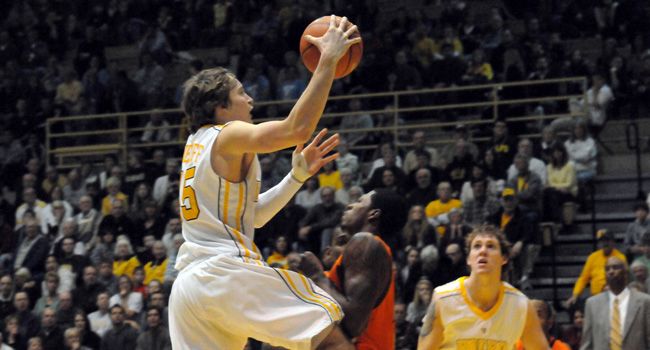 Valparaiso’s bid for a third consecutive victory was denied Sunday afternoon despite a two-point halftime lead, as Wright State out-scored the Crusaders by 20 points in the second half as Valpo fell 73-55 to the Raiders in Dayton, Ohio.

“You’ve got to credit Wright State today, because they played some very good defense,” said Crusader head coach Bryce Drew.  "We had stretches where we were able to get some good looks and get some easy baskets, but they did a good job overall overloading sides defensively and playing tough defense, and it made it very difficult for our offense.”

The Crusaders got out to a quick start Sunday, leading by five just over five minutes into the ballgame, thanks in large part to five early points from junior Ryan Broekhoff (Frankston, Victoria, Australia/Australian Institute of Sport), including a rare four-point play.  Junior Kevin Van Wijk (Hoofddorp, Netherlands/Katholieke Scholengemeenschap Hoofddorp) helped keep Valpo on top for most of the first 10 minutes, scoring nine points in the first quarter of the ballgame.

The lead would change hands a few times in the second portion of the first half, as the two squads tussled back and forth.  But with Wright State holding a 28-27 lead with under four minutes to play in the half, Broekhoff took it upon himself to make sure Valpo was ahead at the break.

The junior drove for a layup to return the lead to the Crusaders, grabbed a rebound on a Wright State miss on the defensive end, and then hit a short jumper in the lane to push the lead to three points.  Broekhoff also had a putback basket near the end of the stanza, scoring Valpo’s last six points of the first half as the Crusaders led 33-31 at the break.  Broekhoff and Van Wijk each had 11 of Valpo’s 33 first-half points.

The second half would be a different story, however, as Wright State limited Valpo to just four field goals in the first 15 minutes of the half.  An inside basket by junior Richie Edwards (Lakeland, Fla./Lakeland [Hillsborough C.C.]) had Valpo tied at 37-all at the first media timeout of the half, but the Raiders scored the next eight points.  Broekhoff canned a 3-pointer with 12:49 to play and then hit a baseline jumper three trips later to keep Valpo within 47-42, but Julius Mays scored eight points during a 12-5 WSU spurt over a nearly eight-minute stretch which pushed the Raider lead into double figures for good.

Broekhoff led the Crusaders with his eighth double-double of the year, closing the afternoon with team highs of 18 points and 14 rebounds, the latter matching his career high.  Van Wijk would finish with 13 points, the only other Valpo player in double figures.  After shooting 52.4% from the floor in the first half (11-of-21), Valpo shot just 8-of-26 (30.8%) in the second half, hit just three 3-pointers on the game and finished with 16 turnovers.

“We’ve got from very high [after the Detroit game Friday] to very low in a span of two days here,” said Drew.  “The good news is that in the middle of a long season, there’s always another game coming up, and we’re already looking forward to our next time on the court.”

Valparaiso (10-7, 3-2 Horizon) comes home for the only time this month next weekend as the Crusaders host a pair of games.  First up will be Youngstown State on Friday evening, with a 7:05 p.m. tip.  As always, all the action can be heard live on the Valpo Sports Radio Network and seen online on the Horizon League Network.  Links to both the audio and video webcasts, as well as live stats and the Valpo Gameday page, will be available at www.valpoathletics.com.