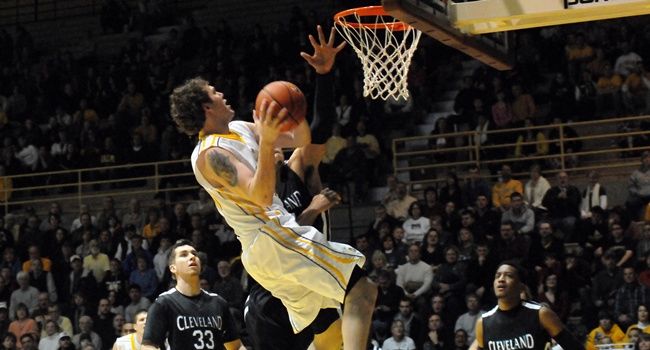 Valparaiso shot 60% from the floor on Sunday afternoon, including a blistering 21-of-28 from inside the arc, and Kevin Van Wijk (Hoofddorp, Netherlands/Katholieke Scholengemeenschap Hoofddorp)  matched his career high for the second straight game with 23 points as the Crusaders downed Horizon League co-leader Cleveland State 72-66 at the Athletics-Recreation Center.

Van Wijk had one of his trademark shooting performances from the floor that rank him among the nation’s top-10 in field goal percentage, converting 10 of his 13 field goal attempts and also knocking down three free throws for 23 points in just 25 minutes of action.  The junior added five rebounds and a season-best three blocked shots.

But for the second straight game, Van Wijk got plenty of help, as four Crusaders ended the night in double figures.  Junior Ryan Broekhoff (Frankston, Victoria, Australia/Australian Institute of Sport) went 5-of-8 from the floor for 14 points while also handing out a career-high tying six assists.  Sophomore Jay Harris (Aurora, Ill./Oswego East) came up with 12 points and four assists off the bench, while junior Matt Kenney (Mooresville, Ind./Mooresville) scored 10 points off the bench and matched his career best with nine rebounds.

The Crusaders, who were up by four at the break, hit six of their first seven shots of the second half, including back-to-back trifectas by Harris, whose second triple put Valpo up 45-34 with 14:57 to play.  The lead was still eight points at 49-41 after back-to-back inside buckets by Van Wijk, but then the junior picked up his fourth foul, sending him to the bench with 12:01 to go.  Cleveland State took advantage, scoring the next 12 points over a span of 3:13 to claim a 53-49 lead with 8:48 remaining.

But Van Wijk re-entered the lineup at that point and sparked a Crusader run, scoring seven points during a 13-4 Valpo run over the next five minutes, which also featured four points from Kenney and a jumper by Harris, that put the Crusaders back in front 62-57 with 4:12 remaining.  CSU’s Trevon Harmon responded with a 3-pointer two possessions later to move the Vikings back within 62-60, where the score would remain as the clock hit two minutes to play.

Valpo forced a pair of inside misses from the Vikings, with Broekhoff grabbing the rebound off the second miss, getting fouled and hitting a pair of free throws to make it a four-point game.  CSU missed 3-pointers on its next two trips, and the Crusaders took advantage of the second miss, as redshirt junior Erik Buggs (Memphis, Tenn./Mitchell) grabbed the board and found Harris on the fast break for a layup to push the lead to 66-60 with 1:04 remaining.

After a Viking turnover, redshirt junior Will Bogan (Boise, Idaho/Vallivue [Ole Miss]) knocked down a pair of free throws to put Valpo up by eight, and Van Wijk made it a 10-point lead with a fast-break layup off a pass from Broekhoff.  Cleveland State scored the next five to move back within 70-65 with 21 seconds remaining, but the Crusaders easily broke the press out of a CSU timeout and Broekhoff put the icing on the cake with an emphatic slam dunk.

The first half was a half of runs on both sides, with the Crusaders landing the first blow on Sunday.  Valpo scored on four of its first five possessions, including three layups from Van Wijk and a pair of baskets off CSU turnovers, to go up 8-0 less than three minutes into the game.  The lead was still eight points at 12-4 before the Vikings reeled off nine consecutive points to go ahead 13-12 with 11:39 remaining in the half.

A 3-pointer by Matt Kenney turned the tables, as Valpo went on a 13-2 run over a seven-minute stretch, capped by another Kenney triple to put the Crusaders up 25-15 with 4:16 to go in the opening stanza.  But with the lead still in double figures a couple minutes later, Cleveland State closed the half with 3-pointers by Tim Kamczyc and Jeremy Montgomery to move within 29-25 at the half.

Cleveland State (15-4, 5-2 Horizon) was led by 18 points on Kamczyc, who hit 7-of-8 from the floor.  Harmon scored 13 points, while Montgomery added 11 points.  Valpo out-scored the Vikings in the paint, 38-28, but Cleveland State forced 16 Crusader turnovers and scored 20 points off of turnovers.

Valparaiso (12-7, 5-2 Horizon) returns to action on Thursday with a short road trip to Chicago to take on Loyola at 7 p.m.  As always, all the action can be heard live on the Valpo Sports Radio Network and seen online on the Horizon League Network.  Links to both the audio and video webcasts, as well as live stats, will be available at www.valpoathletics.com.