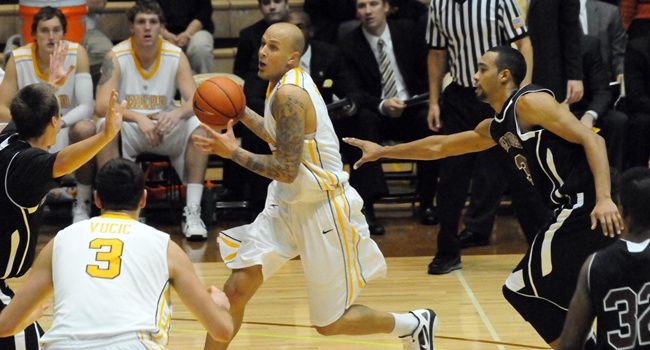 A 16-0 first-half run by Youngstown State proved to be too much for Valparaiso to overcome on Saturday evening, as the Crusaders dropped a 71-53 decision in Horizon League play to the Penguins.

Junior Richie Edwards (Lakeland, Fla./Lakeland [Hillsborough C.C.]), making his first career start with junior Kevin Van Wijk (Hoofddorp, Netherlands/Katholieke Scholengemeenschap Hoofddorp) sidelined due to injury, got the Crusaders off to a quick start on Saturday, scoring Valpo’s first 10 points over the opening five minutes.  Edwards hit a 3-pointer, two inside shots and went 3-of-4 from the foul line over the early stretch, helping give the Crusaders an early 10-5 advantage.

YSU scored the next five points to tie the game, but Valpo got 3-pointers from sophomore Jay Harris (Aurora, Ill./Oswego East) and junior Matt Kenney (Mooresville, Ind./Mooresville) over the next three minutes, the latter giving the Crusaders a 16-12 lead with 11:37 to go in the first half.  That would be Valpo’s last point for over nine minutes, however, as the Crusaders went 0-for-6 from the floor and committed six turnovers during the stretch.  Meanwhile, the Penguins went 8-for-14 from the field in the same time span to go on a 16-0 run and go up 28-16.

A pair of free throws from junior Ryan Broekhoff (Frankston, Victoria, Australia/Australian Institute of Sport) with 2:17 to play in the opening half snapped the Crusaders’ scoreless stretch, but Youngstown State answered with the next four points.  Valpo would get the last basket of the half, however, as Broekhoff found Edwards inside for a layup inside the final minute to cap a 12-point half by Edwards and bring the Crusaders within 32-20 at the break.

The Crusaders had a run in them at the beginning of the second half thanks to the efforts of Broekhoff.  The junior had a putback basket on Valpo’s first possession and then converted a pair of free throws on the Crusaders’ next trip.  After Youngstown State got a pair of free throws from Damian Eargle, Broekhoff came down and hit a 3-pointer to cap a 9-2 run spanning the two halves which pulled Valpo back within 34-27 with 18:33 to play.  But YSU scored the next 10 points over the next four minutes, and the Crusaders got no closer than 13 points the rest of the way.

Edwards posted his fourth straight game of at least 16 points, going 6-for-11 from the floor in his first career start to finish with a team-high 19 points.  Broekhoff picked up his league-best tenth double-double of the year with 12 points and 11 rebounds, but went just 2-for-10 from the field, while Harris ended the night with 11 points on 3-of-10 shooting.  As a team, the Crusaders shot a season-worst 31.9% (15-of-47) and were just 5-of-22 from behind the arc.

Youngstown State (14-11, 9-6 Horizon) was led by Kendrick Perry’s 23-point effort on Saturday, while DuShawn Brooks knocked down ten 2-pointers to finish with 20 points.  Brooks also picked up nine rebounds as the Penguins out-rebounded the Crusaders, 39-29.

Valparaiso (18-9, 11-4 Horizon) maintained a half-game edge for first place in the league standings thanks to a Cleveland State loss earlier Saturday.  The Crusaders close out the Horizon League slate with a trio of home games, beginning Tuesday against UIC at the ARC at 7:05 p.m.  As always, all the action can be heard live on the Valpo Sports Radio Network and seen online on the Horizon League Network.  Links to both the audio and video webcasts, as well as live stats and the Valpo Gameday page, will be available at www.valpoathletics.com.