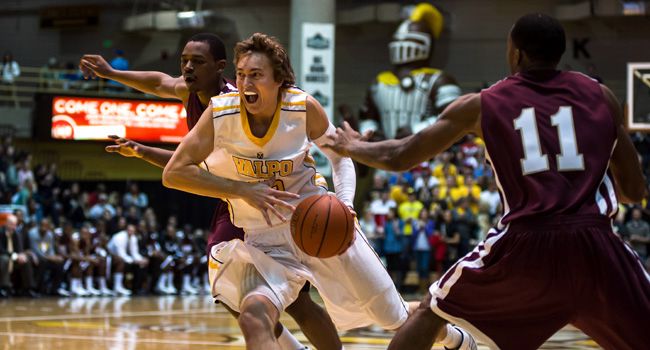 Next Up in Crusader Basketball: Valparaiso opens the 2012-2013 regular season at home Friday night against Georgia Southern at 7:30 p.m., the back end of a doubleheader with the Crusader women’s team. Fans are encouraged to wear white to help “White Out” the ARC on Friday evening.

Last Time Out: Valparaiso used a 20-3 run to start the second half to defeat Robert Morris (Ill.), which entered the game ranked fourth in the nation among NAIA schools, by a final of 92-64 last Saturday evening at the ARC in exhibition action. The game was the second of Valpo's two exhibition contests. Bobby Capobianco paced the Crusaders with 21 points and eight rebounds.

Following the Crusaders: Audio - Valpo Sports Radio Network - WAKE (1500 AM, Valparaiso) - Todd Ickow (PxP) and Travis Lucian (Color) on the call
Video - Horizon League Network
Links for the audio and video, as well as live stats, will be available at valpoathletics.com. In addition, valpogameday.com is a one-stop shop for live video, stats and interactive chat, all on the same page.

Series Notes: The Crusaders and Eagles have met just twice in program history, but both meetings have come in the last three years, both at Georgia Southern, and both with Valpo coming out victorious. Last season, Valpo earned a 90-81 win over the Eagles on Nov. 11, placing five scorers in double figures. Ryan Broekhoff led the way with a double-double of 22 points and 13 rebounds.

...looking back at last year
- @ValpoBasketball claimed its first @HorizonLeague regular season title in 2011-12, winning the crown by two games.
- The Crusaders earned the right to host the #HLMBB postseason tournament by winning the regular season and advanced to the championship game.
- @ValpoBasketball played at @CanesHoops in the first round of the postseason NIT, the Crusaders’ 11th postseason trip in the last 17 years.
- The Crusaders won 22 games overall in 2011-12, their 12th 20-win season in the last 19 years.
- @ValpoBasketball boasted the #HLMBB Coach of the Year (Drew), Player of the Year (Broekhoff) and a second First Team selection (Van Wijk).

...in the exhibitions
- @ValpoBasketball won both its exhibition games by 28 points, defeating @sjc_athletics and @RMUEagles.
- The Crusaders led by double figures for the last 30 minutes in the win over @sjc_athletics.
- Valpo shot 55% from the floor, 40% from the 3-point line and 95% from the free throw line against the Pumas.
- In its second exhibition, @ValpoBasketball led by just two at the half against @RMUEagles, ranked fourth in the nation in NAIA.
- The Crusaders started the second half on a 20-3 run to pull away from the Eagles.
- @ValpoBasketball shot 66.7% from inside the arc (28-of-42) in the win over Robert Morris and hit 27-of-34 (79.4%) from the foul line.

...looking ahead
- @ValpoBasketball will take part in the @ESPNCBB Tip-Off Marathon on Tuesday, Nov. 13, hosting @NIUAthletics at the ARC at 7 a.m.
- This marks the first appearance for @ValpoBasketball on the @ESPNCBB Tip-Off Marathon.
- The game will be broadcast live on ESPN, the Crusaders’ second game on the mothership over their last three home games.

...in home openers
- @ValpoBasketball has won its home opener in each of the last seven seasons, all by double digits. #ValpoGameday
- Last season, the Crusaders won 88-38 over Holy Cross (Ind.) in their home opener.
- The last time @ValpoBasketball lost a home opener was Nov. 27, 2004, falling to @Charlotte49ers by a 85-71 final.

@GSAthletics
- The Crusaders are playing Georgia Southern for the third time in the last four seasons, with @ValpoBasketball owning a 2-0 series lead.
- @GSAthletics did not play an exhibition game, opting to play a pair of closed scrimmages instead.
- Georgia Southern is led by junior Eric Ferguson, a first team @SoConSports selection a season ago.
- Ferguson led the Eagles, averaging 15.4 ppg and 7.2 rpg in 2011-12.
- @GSAthletics also gains the services of guard C.J. Reed, the @MEAC1970 Player of the Year in 2010-11.

Bryce Drew
- Bryce Drew is entering his second season as head coach of @ValpoBasketball and is in his eighth season overall on the coaching staff.
- Drew was named #HLMBB Coach of the Year in 2011-12 in his first season as head coach.
- Drew was the first @ValpoBasketball Coach of the Year since 2001-02, when dad Homer won the honor in the Mid-Con.
- Drew led the Crusaders to 22 wins and the @HorizonLeague regular season title in his first year at the helm.
- Prior to coaching, Drew spent seven seasons playing professionally, including six seasons in the @NBA.
- Drew was a two-time Mid-Con MVP in his playing days with @ValpoBasketball, helping the team to three @NCAA tournament appearances.
- Drew hit “The Shot”, a buzzer-beating 3-pointer in the first round of the 1998 @NCAA tournament, to lift the Crusaders over @OleMissMBB.

Kevin Van Wijk
- Van Wijk was named a Preseason First Team All @HorizonLeague choice entering the 2012-13 season.
- After sitting out the first exhbition, Van Wijk scored 14 points and grabbed six rebounds in just 15 minutes in the win over Robert Morris.
- Van Wijk is coming off a junior season where he was named a First Team All-League selection.
- Van Wijk ranked second on @ValpoBasketball in scoring (14.1 ppg) in 2011-12 and also averaged 5.2 rebounds per game.
- Van Wijk led all #HLMBB players with a 61.7% FG pct, good for fifth in the nation and third-best in a single season in Crusader history.
- Van Wijk scored at least 20 points in six games and posted a pair of double-doubles.
- Van Wijk was twice named @HorizonLeague Player of the Week (Jan. 16 and Nov. 21).
- Van Wijk was named to the All-Tournament Team at the Valparaiso Subregional of the @2KSportsClassic.

Matt Kenney
- Kenney enters his senior season ranked 18th in @ValpoBasketball history with 231 career assists.
- Kenney scored 15 points on 5-of-7 shooting in 22 minutes off the bench in the exhbition win over St. Joe’s.
- Kenney was in the starting lineup for the exhibtion win over Robert Morris, scoring nine points.
- Kenney averaged 7.3 points and 4.5 rebounds per game as a junior for the Crusaders in 2011-12.
- Kenney paced @ValpoBasketball with 27 blocks last season and also finished third on the team with 35 steals.
- Kenney came off the bench for his final 19 games of the season, but still finished second on the team with 27.8 minutes/gm.

Will Bogan
- Bogan scored nine points in the exhibition win over St. Joe’s and added five points in the exhibition win against Robert Morris.
- Bogan started 32 games in his first season with @ValpoBasketball in 2011-12, averaging 7.2 points per game.
- Bogan ranked second among Crusaders with 61 3-pointers and hit from downtown at a 40.9% clip.
- Bogan’s 3-point percentage ranked seventh in the Horizon League and is tied for ninth-best in a single season in @ValpoBasketball history.
- Bogan was named @ValpoAthletics male newcomer of the year by Valpo’s Student-Athlete Advisory Committee.
- Bogan made a career-high seven 3-pointers and scored 24 points in the Crusaders’ win at @detroittitans Jan. 6.

Ben Boggs
- Boggs hit three 3-pointers en route to 12 points and five rebounds in just 17 minutes in opening exhibition win over St. Joe’s.
- Boggs sat out the second exhibition game against Robert Morris.
- Boggs became eligible after the end of the first semester last year for @ValpoBasketball and appeared in 24 games, starting 20.
- Boggs averaged 4.5 points and 3.2 rebounds per game for the Crusaders, who were 14-6 in his starts.
- Boggs shot better than 80% from the free throw line in his first season with @ValpoBasketball, second-best on the team.

Jordan Coleman
- Coleman is eligible to play for @ValpoBasketball immediately after transferring from Southwestern Illinois College.
- Coleman was an All-Conference selection for SWIC last season, finishing second on the team with 10.2 ppg.
- Coleman started his collegiate career as a freshman at @HawaiiAthletics.
- Coleman scored seven points in each of the Crusaders’ two exhibition wins and also pulled down seven rebounds against Robert Morris.