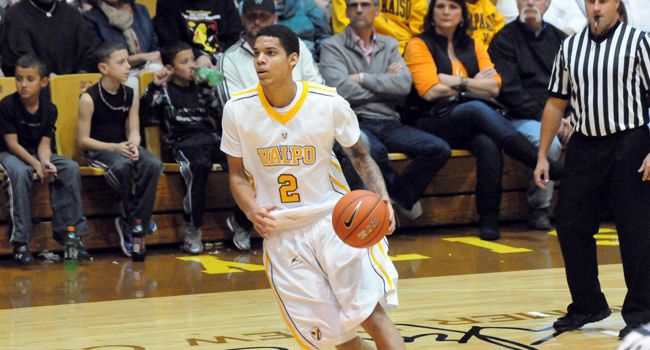 The Valparaiso men's basketball team led 17-2 six minutes into Friday night's season opener at the ARC against Georgia Southern, and left no doubt from there, cruising to an 85-54 victory over the Eagles.

The Crusaders got the game off on the right foot, as senior Kevin Van Wijk (Hoofddorp, Netherlands/Katholieke Scholengemeenschap Hoofddorp) scored on each of Valpo's first two possessions. Following a basket by the Eagles, senior Ryan Broekhoff (Frankston, Victoria, Australia/Australian Institute of Sport) knocked down a triple, and three possessions later, Broekhoff canned another 3-pointer to make it 10-2 Crusaders just four minutes into the game.

Even following the first media timeout, Valpo kept rolling along. Broekhoff got to the free throw line and converted a pair of freebies, and fifth-year senior Erik Buggs (Memphis, Tenn./Mitchell) followed with a steal and fast-break layup. Broekhoff capped the game-opening run with a driving basket while getting fouled, converting the old-fashioned 3-point play to give him 11 quick points and stake Valpo to a 17-2 lead just over six minutes into the contest.

Georgia Southern would cut the lead to single digits on a couple of occasions, but Valpo never let the Eagles get any closer than six points the rest of the way. Leading by eight at 24-16 with 7:16 to go in the first half, the Crusaders would end the half on a 16-5 run, including 3-pointers from seniors Matt Kenney (Mooresville, Ind./Mooresville), Ben Boggs (Roanoke, Va./Hidden Valley [Virginia Tech] and Will Bogan (Boise, Idaho/Vallivue) and capped by a buzzer-beating 3-pointer by junior Jordan Coleman (North Hollywood, Calif./Calabasas [Southwestern Illinois College/Hawai'i]), to go into the locker room leading 40-21.

The result was academic from there, as the Eagles got no closer than 16 points in the second half. The last large surge for the Crusaders came midway through the period, as they scored 17 points in a stretch of 2:31, which included five points from Van Wijk, another Bogan triple and three 3-pointers for his first three Crusader baskets by redshirt sophomore Alex Rossi (Winnetka, Ill./New Trier [California]), to push the advantage to 78-37.

Van Wijk was as efficient as always to pace the Crusaders in scoring Friday night, going 5-of-8 from the field and 6-of-7 from the line for 16 points in just 20 minutes of play. Coleman scored 15 points off the bench in his Valpo debut, including a perfect 4-for-4 effort from behind the 3-point line. Broekhoff needed just five official field goal attempts, going 4-for-5, to end the night with 14 points in just 23 minutes.

"Ryan and Kevin really got us off to fast starts tonight, both at the start of the game and at the start of the second half as well," said Crusader head coach Bryce Drew. "Then I was proud of the way Jordan played as well, not just offensively, but also his work on the defensive end stood out, getting to a number of loose balls. All three really had big games for us tonight."

Boggs led Valpo on the glass with seven rebounds, just one shy of a career best, as the Crusaders out-rebounded the Eagles by a 31-23 margin. Meanwhile, Buggs set a new career high by dishing out nine assists as Valpo totaled 19 helpers on 27 baskets.

"I thought our bench collectively did a great job picking up their game tonight," said Drew. "Vashil did an excellent job for us at the five-spot."

Georgia Southern (0-1) was led by 18 points from Cleon Roberts and also got 16 points and seven rebounds from Eric Ferguson. Tre Bussey added 10 points as well in the losing effort.

"Georgia Southern is a team which finished second in their division of the Southern Conference last year," said Drew. "I think by the end of the year, they're going to be right there in the mix for their title."

Valparaiso (1-0) returns to action early in the morning of Tuesday, Nov. 13, as the Crusaders host Northern Illinois at 7 a.m. as part of ESPN's Tip-Off Marathon, which features 24 consecutive hours of live basketball. Fans are invited to attend a pancake breakfast in Hilltop Gym, starting at 6 a.m. - free for students, $5 for the general public.

The game will be broadcast live on ESPN, with Beth Mowins and LaPhonso Ellis on the call. As always, it will also be carried on the Valpo Sports Radio Network, with links for the live audio and live stats available at valpoathletics.com. ValpoGameday.com will also be open with a live chat for the game.