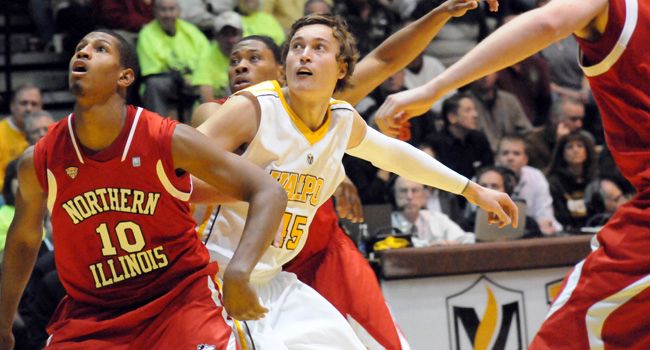 The nation woke up to a Valparaiso men's basketball victory on Tuesday morning, as the Crusaders started the second half on a 21-5 run to put away Northern Illinois, 69-46. The game, which tipped off just after 7 a.m., was the fifth game of the ESPN College Hoops Tip-Off Marathon and was broadcast live on ESPN.

Despite the early tip time, the earliest start time for a Crusader men's game at the ARC in program history, Valparaiso students were out in force. Tailgating started outside in the dead of night at 4 a.m., and crowds swarmed to the pancake breakfast held in Hilltop Gym starting at 6 a.m. The student section filled up within minutes of the door opening, almost all sporting the neon green t-shirts which were given away to the first 1,000 fans.

"The student section was awesome today," said Crusader head coach Bryce Drew. "They kind of woke me up this morning - they were really excited for the game, and it showed. No question our players fed off their energy. We really enjoyed playing in that atmosphere."

It was a slow start for both squads once the game got underaway, as Northern Illinois scored on its first possession and then went scoreless for over five minutes. Valpo's only points in the first six minutes came courtesy of a pair of free throws from Ryan Broekhoff (Frankston, Victoria, Australia/Australian Institute of Sport) just over two minutes into the game.

Broekhoff would score Valpo's first seven points of the game, converting a fast-break layup and hitting a 3-pointer on back-to-back trips to give the Crusaders a 7-4 lead with 13:04 to go in the first half, a lead Valpo would not relinquish. The senior then fed junior Jordan Coleman (North Hollywood, Calif./Calabasas [Southwestern Illinois College/Hawai'i]) for a 3-pointer of his own to push the edge to six points.

Later in the half, Broekhoff connected on three 3-pointers in a stretch of just 2:43, the last of which put Valpo ahead 21-11 with 5:29 to play in the half and capped a 16-point half for the senior. The Crusaders would score just one basket, a driving layup by fifth-year senior Erik Buggs (Memphis, Tenn./Mitchell), in the final five and a half minutes as Northern Illinois closed to within 23-17 at the break.

The second half was a different story, however, as the Crusaders jumped all over the Huskies out of the break. Buggs hit senior Ben Boggs (Roanoke, Va./Hidden Valley [Virginia Tech]) for 3-pointers on each of Valpo's first two possessions to push the lead to 29-17 and force an NIU timeout just 50 seconds into the half.

Valpo's lead never fell back into single digits the rest of the way and quickly made its way up to 20 points. A four-point possession just over 4:30 into the second period, on a basket by senior Matt Kenney (Mooresville, Ind./Mooresville) and two free throws off an offensive rebound from Broekhoff, gave the Crusaders a 38-22 edge.

Then, first Coleman and then Broekhoff came up with steals on the defensive end and found themselves uncontested for fast-break dunks, Coleman's a reverse two-hand slam and Broekhoff a one-hand jam which made it 42-22 Valpo with 14:12 remaining. Kenney capped the blowout with 3-pointers on three consecutive possessions just past the midway point of the second period.

Broekhoff led all players on Tuesday with 20 points, 16 of which came in the first 20 minutes as he nearly outscored Northern Illinois by himself in the first half. The senior also grabbed 13 rebounds for his 15th career double-double. Kenney scored 16 points, all in the second half as he was a perfect 6-for-6 from the floor in the period. Boggs added 11 points, including three 3-pointers, to round out the trio of Crusaders in double figures.

Buggs ended the morning with a game-high seven assists to follow up on his nine-assist effort in the season opener. Defensively, sophomore Vashil Fernandez (Kingston, Jamaica/Princeton Day [Md.] Academy) tallied four of the Crusaders' seven blocked shots. As a team, Valpo shot 52.1% (25-of-48) from the floor, including 54.2% (13-of-24) from 3-point range and increased its percentages to 68% and 72.7%, respectively, in the second half.

Northern Illinois (0-2) was led by 10 points and nine rebounds from Aksel Bolin, while Travon Baker registered a game-high four steals. The Huskies shot just 29.2% (19-of-65) from the field and hit just four 3-pointers on 18 tries.

Valparaiso (2-0) looks to make it three straight wins to open the season on Thursday evening at Nebraska at 8 p.m. The game will be televised live on the Big Ten Network and can also, as always, be heard live on the Valpo Sports Radio Network. Links to the live audio and live stats will be available at www.valpoathletics.com.