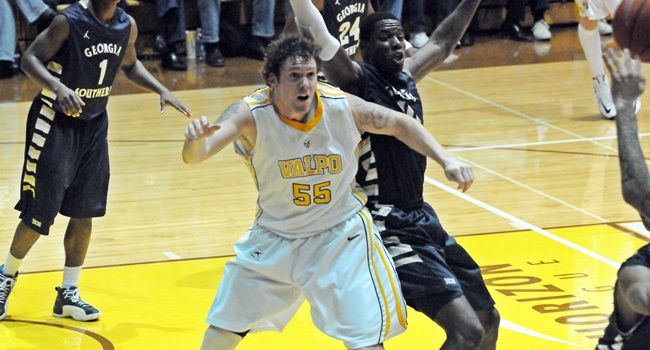 The Crusaders’ and Huskers’ first meeting since 1920 was a defensive struggle as neither team shot better than 40 percent. Valpo finished 34 percent from the field and shot just 2-of-15 from behind the arc after draining 26 three-pointers in its first two contests.

“Usually we are a lot more aggressive driving to the basket,” head coach Bryce Drew said. “I thought Nebraska did a good job closing out, and also containing our drive. I thought Nebraska’s bigs did a good job being bigs. [Valpo] has won before by not shooting well from three, basically we were two points away from that tonight.”

“I thought the last seven minutes we finally got a rhythm and started to play,” Drew said. “For 33 minutes Nebraska outplayed us. That is something we will try and work on for the next game.”

Valpo trailed 28-22 at halftime and the margin swelled to as high as 14 in the early stages of the second half.  A lay up by Nebraska’s Benny Parker put the Huskers up 40-26 with 14:58 remaining.  The Crusaders outscored Nebraska 22-10 the rest of the way.

It was a see-saw affair for the first five minutes of the game as the two teams were deadlocked 9-9.  A Will Bogan (Boise, Idaho/Vallivue [Ole Miss]) triple ignited a 7-2 Crusaders run and Valpo raced out to its largest lead of the game, leading 16-11 with 11:07 remaining.  The Huskers, however, closed out the half on a 17-6 spurt.

The Crusaders played much of the second half with a thin bench.  Fifth-year senior Erik Buggs (Memphis, Tenn./Mitchell) checked out early in the second half and did not return, while senior Ben Boggs (Roanoke, Va./Hidden Valley [Virginia Tech]) fouled out with just under seven to play.

The Crusaders were held with fewer than 50 points for the first time since scoring 47 in a loss to Ohio State last November.  Meanwhile, Valpo’s defense is allowing just 50 points per contest through three games.

Valparaiso (2-1) wraps up the road trip Sunday with a 1 p.m. game against Kent State in Ohio. The game will can be heard live on the Valpo Sports Radio Network. Links to the live audio and live stats will be available at www.valpoathletics.com.