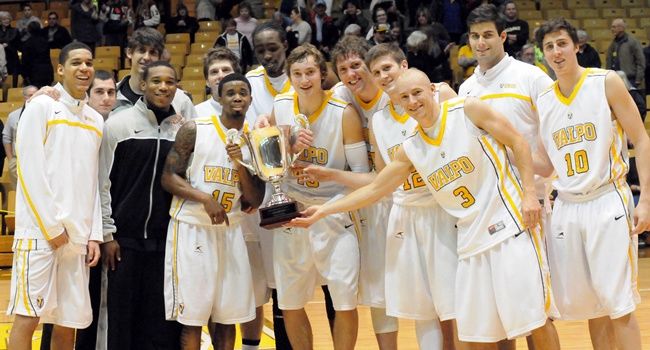 Valparaiso senior Ryan Broekhoff (Frankston, Victoria, Australia/Australian Institute of Sport) scored 26 of his career-high 30 points in the first half as the Crusaders ran out to a 20-3 lead en route to a 77-64 victory Saturday night at the ARC over Bethune-Cookman.  With the win, the Crusaders claimed the trophy for winning the Valparaiso Division of the Joe Cipriano Nebraska Classic.

"I'm very proud of our guys," said Crusader head coach Bryce Drew.  "We came out strong and got the lead early, and never let it get below nine points.  Ryan was just special for us in the first half - he had an almost-perfect half.  Kevin was consistent with his scoring inside in both halves, and really got us going in the second half with a couple quick baskets."

It was a pair of Crusaders not named Broekhoff who got Valpo going in the early going, as senior Kevin Van Wijk (Hoofddorp, Netherlands/Katholieke Scholengemeenschap Hoofddorp) scored the Crusaders' first four points and then hit fifth-year senior Will Bogan (Boise, Idaho/Vallivue [Ole Miss]) for a 3-pointer to give Valpo a 7-3 lead at the first media break.  For Bethune-Cookman, Adrien Coleman converted a 3-point play following a steal 1:22 into the ballgame, the Wildcats' only points in the first seven-plus minutes.

Following the stoppage, Broekhoff just took over the game.  The senior nailed a 3-pointer for his first basket with 15:32 to play, and 30 seconds later came up with a steal and fast-break basket.  Following a Bethune-Cookman miss, Broekhoff lined up another trifecta and drilled it while being fouled, finishing off the four-point play.  Then Broekhoff hit the glass for a defensive rebound and was fouled, and following a technical foul, hit all four free throws to cap a stretch of 13 straight points over a span of just 1:29 as Valpo led 20-3.

After a stint on the bench, Broekhoff came back in and knocked down all four of his free throw attempts during his next stretch to push his point total to 17 points.  Meanwhile, senior Ben Boggs (Roanoke, Va./Hidden Valley [Virginia Tech]) hit a 3-pointer just 10:34 into the game to give the Crusaders a 20-point lead for the first time, and two minutes later, Boggs knocked down a jumper from the top of the key on the fast break to make it 32-11 Valpo.

Following another rest period, Broekhoff re-entered with under five minutes to play in the half after Bethune-Cookman had cut the lead to 32-18.  The senior promptly drove inside for a layup, and two possessions later connected on an NBA-range 3-pointer from the left wing.  On the next trip, senior Matt Kenney (Mooresville, Ind./Mooresville) found Broekhoff with an alley-oop which the latter laid in off the glass, and the Australian capped off his 26-point half with a tough shot in the paint with 1:16 to play in the half.  Broekhoff's 26 points at the break matched his previous career high for an entire game, set last year at home in a win over Detroit.

The Crusaders' lead was cut to 44-28 at the half, as Bethune-Cookman scored the last two baskets of the opening stanza, but Van Wijk quickly made it 50-28 with a pair of 3-point plays within the first minute of the second half.  Valpo then had an answer for every rally the Wildcats threw at them in the second half.  B-CU cut the lead to 52-40 with 15:27 to play, but redshirt junior Bobby Capobianco (Loveland, Ohio/Loveland [Indiana]) tipped in a miss and Broekhoff added a pair of free throws to push the advantage back to 16.

An 8-0 run for the Wildcats cut the lead to single digits at 58-49 with 11:03 to go, but Valpo needed just 25 seconds to make it a double-digit game again, the start of a five-point spurt which included a fast-break layup from fifth-year senior Erik Buggs (Memphis, Tenn./Mitchell).  Then, the Crusaders held off one last rally, turning a 65-55 lead into a 75-58 advantage over a span of three minutes.  Boggs and Bogan both hit 3-pointers during the run, which Broekhoff capped with his 29th and 30th points of the night on a putback basket.

Van Wijk and Bogan joined Broekhoff in double figures, the former scoring 19, including 14 in the second half, and the latter 11.  Van Wijk also paced Valpo on the boards with eight rebounds to go with seven by Broekhoff and six by Kenney, as the Crusaders held a 33-19 advantage on the glass.  The Crusaders shot 54.8% (23-of-42) for the game, including 53.3% (8-of-15) from behind the 3-point line.

"Bethune-Cookman will be a very good team this year," said Drew.  "They won their conference two years ago and were in their tournament championship last year.  We knew they had a pair of excellent players in Dukes and Coleman, and I thought Smith played well tonight as well."

Valparaiso (5-1) has over a week until its next game, a Sunday afternoon matchup at Saint Louis.  The game will be televised live on Fox Sports Midwest and, as always, can be heard live on the Valpo Sports Radio Network.  Links for the live audio, as well as live stats, will be available at valpoathletics.com.