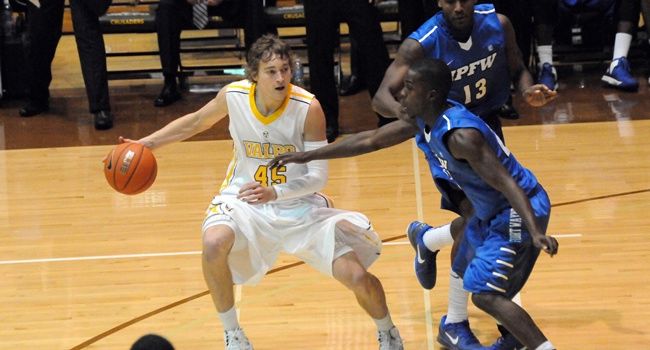 Valparaiso held IPFW to just three points over an 11-plus minute stretch of the second half, a stretch in which the Crusaders pushed its advantage into double figures as Valpo went on to a 63-52 victory over the Mastodons Wednesday evening at the Athletics-Recreation Center.

Valpo led by three points coming out of the halftime break at 35-32.  But despite a 3-point play from senior Kevin Van Wijk (Hoofddorp, Netherlands/Katholieke Scholengemeenschap Hoofddorp) and a triple by senior Ryan Broekhoff (Frankston, Victoria, Australia/Australian Institute of Sport) on its first three possessions of the second half, the Crusaders could not add to their lead, as IPFW scored six points over the same span as well to make it 41-38 Crusaders with 17:27 remaining.

Both squads then went cold from the floor, with neither team adding to its point total for over five minutes.  Finally, it was junior Jordan Coleman (North Hollywood, Calif./Calabasas [Southwestern Illinois College/Hawai’i]) who broke the seal, jumping a passing lane for a steal and taking it all the way for a two-handed fast-break dunk, pushing the edge to 43-38 with 12:22 to play.

Nearly three minutes would pass until the Crusaders scored again, but Valpo maintained the lead, as IPFW hit just three free throws over the interim to move within 43-41 with 10 minutes to play.  Then, fifth-year senior Erik Buggs (Memphis, Tenn./Mitchell) hit Van Wijk inside for an easy layup to spark the Crusaders’ decisive 10-0 run.

Two trips later, Valpo ran a set play, getting Broekhoff an open 3-pointer which he knocked down to push the advantage to seven points.  After an empty IPFW possession, it was again Broekhoff with the big play, as the senior drove baseline with the shot clock running down and hit a nifty one-handed jumper with 7:15 to go.  A split of free throws for Broekhoff made it a double-digit game for the first time, as Valpo led 51-41 with 6:53 remaining.

But Broekhoff’s biggest play came on the Crusaders’ next possession.  Following an IPFW miss, Broekhoff grabbed the defensive board and triggered the fast break.  Valpo got an open look from behind the 3-point line which was off the mark, but Broekhoff came streaking in from the top of the key, secured the rebound while off-balance and, falling out of bounds, delivered a strike to redshirt junior Bobby Capobianco (Loveland, Ohio/Loveland [Indiana]) for a wide-open layup.  The basket capped the 10-0 spurt, putting Valpo ahead 53-41 with just over six minutes remaining, and IPFW would get no closer than nine points the rest of the way.

A back-and-forth opening stanza saw both teams claim leads along the way, while neither squad led by more than five points.  Following Frank Gaines’ fourth 3-pointer of the first half, IPFW enjoyed its largest lead at 26-23, but Valpo went on a 12-4 run over the next five minutes to claim the lead for good.  Broekhoff counted a 3-pointer among his seven points in the spurt, while Van Wijk added three points and Capobianco a basket as well.  A layup by the Mastodons’ Pierre Bland with one second remaining in the opening stanza cut the Valpo lead to 35-32 at intermission.

Broekhoff led all players on Wednesday with his typical efficient effort, going 7-of-13 from the floor, including 4-of-8 from downtown, for 21 points.  The senior also paced everyone on the glass, grabbing nine rebounds, and handed out a game-high four assists as well.  Van Wijk added 12 points and six rebounds, while Capobianco scored nine points.  Buggs chipped in seven points and three assists while not committing a turnover in 32 minutes of action.

“Ryan was unbelievable,” said Crusader head coach Bryce Drew.  “He’s been battling illness for the last month and has never complained.  He was spectacular tonight – it seemed like he was there for every loose ball, he scored a bunch of points and then the icing on the cake was that pass to Bobby.  Bobby did a good job tonight as well – he came into the game and really gave us some toughness down low.”

IPFW (5-5) was led by 19 points from Gaines, but the Mastodons’ leading scorer was limited to just four second-half points.  Gaines also came up with a game-high four steals.  Valpo held IPFW to just 31.4% (16-of-51) shooting from the floor, and the Mastodons were just 4-of-20 from the field in the second half, two of which came in the first two minutes of the half.

Valparaiso (6-2) returns to action with its first matchup against a ranked opponent this year, taking on #18/20 New Mexico in Albuquerque on Saturday evening at 8 p.m. CT.  All the action can be heard live on the Valpo Sports Radio Network and online at www.valpoathletics.com, which will also have a link for live stats.