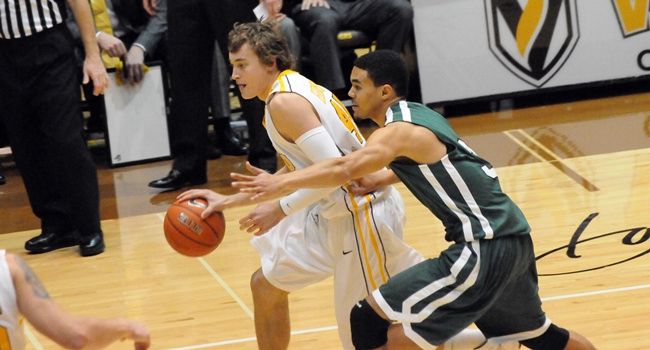 Senior Ryan Broekhoff (Frankston, Victoria, Australia/Australian Institute of Sport) scored a game-high 24 points Saturday evening at the Pit in Albuquerque, N.M., but 23 turnovers were too much for Valparaiso to overcome as the Crusaders fell by a final score of 65-52 to #18/20 New Mexico.

The game marked the first-ever meeting between a pair of former Indiana Mr. Basketball recipients as head coaches at the Division I level.  New Mexico head coach Steve Alford earned the honor in 1983, while Crusader head coach Bryce Drew earned the award in 1994 before continuing his playing career at Valparaiso.

Valpo got off to a quick start on Saturday night, scoring five points on its first three possessions on a 3-pointer and a driving layup by Broekhoff.  The Crusaders would not score for the next five minutes, as New Mexico scored nine points in a row over the span before fifth-year senior Will Bogan (Boise, Idaho/Vallivue [Ole Miss]) knocked down a 3-pointer to bring Valpo within 11-8.

The New Mexico lead fluctuated between one and five points for most of the remainder of the first half.  The Lobos matched their largest lead of the opening stanza with under four minutes to go in the half on a jumper by Cameron Bairstow, but another Bogan triple cut the lead to three and Broekhoff tied the game at 25-all with 1:33 to play in the half with a 3-pointer.  But New Mexico scored the last four points of the opening stanza, including Nick Banyard’s first 3-pointer of the year, to take a 29-25 lead into the break.

A inside basket from senior Kevin Van Wijk (Hoofddorp, Netherlands/Katholieke Scholengemeenschap Hoofddorp) to open the second half brought Valpo back within two points, and after New Mexico scored the next four, Broekhoff connected on yet another 3-pointer to make it a 33-30 game with 17:06 to play.  But the Lobos posted eight straight points in a three-possession span over the next 1:40, going ahead 41-30, and Valpo would get no closer than seven points the rest of the way.

Broekhoff ended the night 8-of-14 from the field, including 5-of-10 from behind the arc, to finish with his game-high 24 points, but no other Crusader finished in double figures.  The senior also grabbed a game-high seven rebounds.  Van Wijk was next on the Valpo scoring ledger with seven points.  Fifth-year senior Erik Buggs (Memphis, Tenn./Mitchell) tied for game-high honors with six assists.

Valparaiso (6-3) returns to the court next Saturday, December 15 in a BracketBuster return game at Missouri State.  The game can be heard live on the Valpo Sports Radio Network and can be heard online at ValpoAthletics.com, which will also have a link for live stats.