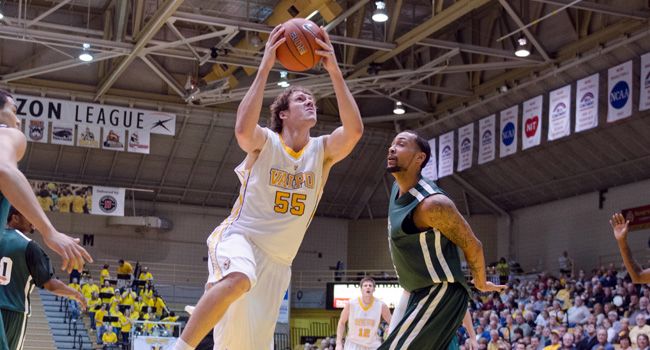 The Valparaiso men’s basketball team trailed by 22 points with 17 minutes to play Thursday evening at Detroit and still trailed by 11 with three minutes remaining, but the Crusaders completed a remarkable comeback by scoring the final 12 points of the game, capped by two free throws from Ryan Broekhoff (Frankston, Victoria, Australia/Australian Institute of Sport) with 17 seconds to play, as Valpo downed the Titans by an 89-88 final.

“We were kind of speechless in the locker room after the game,” said Crusader head coach Bryce Drew.  “I thought Detroit dominated the game through the first half.  We were able to chip away in the second half, and then those last few minutes, we hit a bunch of shots in a row to give us a chance for the lead at the end.  It’s just one of those crazy games, and it’s seems we’ve had a lot against Detroit in the last few years.  I’m just proud of our guys and the way they persevered in the second half.”

The Crusaders were in position for the comeback thanks to a career game from senior Kevin Van Wijk (Hoofddorp, Netherlands/Katholieke Scholengemeenschap Hoofddorp).  Van Wijk ended the game 13-of-15 from the floor and also connected on 5-of-7 from the foul line for a career-high 31 points.  The senior scored 19 of his points in the second half, including a perfect 8-of-8 from the field in the final 20 minutes.

Valpo trailed by 11, 88-77, as the clock ticked past the three-minute mark following a jumper by Nick Minnerath, who ended the night with a game-high 36 points.  The Crusaders responded on the offensive end by scoring on the second of six straight possessions, as senior Matt Kenney (Mooresville, Ind./Mooresville) canned a 3-pointer off a feed from Broekhoff to cut the deficit to eight points.

Detroit got two shots at the basket on its next trip, but neither fell, and fifth-year senior Erik Buggs (Memphis, Tenn./Mitchell) hit an open Kenney in transition for his second straight triple, moving Valpo within 88-83 with 1:48 remaining.  Buggs then grabbed a defensive rebound off a Ray McCallum miss on the defensive end and again pushed the ball, connecting with an open Van Wijk underneath for a layup to make it a one-possession game.

A Titan turnover returned the ball to the Crusaders, and while Broekhoff couldn’t get his drive to fall, Van Wijk was there for an offensive rebound and got fouled on his putback attempt.  The senior calmly knocked down both freebies to move Valpo within 88-87 with 47 seconds left.  Detroit ran down the shot clock on its possession, but McCallum had the ball poked away on an attempted drive.

Broekhoff was there to grab the loose ball and was fouled while trying to break away, swishing both his free throw attempts with 17 seconds left to give Valpo its first lead of the game.  Detroit had two cracks at a go-ahead basket, but an Evan Bruinsma attempt from the top of the key was off the mark and a last grasp by Minnerath was altered by Kenney, allowing the Crusaders to snap Detroit’s 17-game home winning streak.

Detroit got out to a fast start, jumping out to a double-figure lead at 17-6 less than seven minutes into the game.  Valpo would not get any closer than eight the rest of the way in the opening 20 minutes, as the Titans capped the first half with a 26-foot 3-pointer by Jason Calliste to take a 50-32 lead into the locker room, led by 21 first-half points from Minnerath.

The Titans pushed their lead to the highest at 60-38 with 17:08 remaining on a trio of free throws by Minnerath.  Valpo slowly moved back into the game, getting within 15 with 13:10 to play on a 3-pointer by Kenney.  The Crusaders then cut the lead to single digits for the first time in the second half as Van Wijk hit a short jumper in the lane with 10:06 to play.  The margin would fluctuate between eight and 12 points for the next seven minutes until the Crusaders’ closing run.

“I thought our guys played with purpose the whole game,” said Drew.  “Detroit’s such a talented team and they score the ball so quickly – I actually thought we were playing some good defense on them, and they were just making shot after shot.  I feel like we started to make some shots in the second half, especially in the last 10 minutes, and that helped build some momentum and helped us get some more stops on defense.”

Three Crusaders ended the night in double figures, as Van Wijk was joined by 18 points from Broekhoff, who finished the night a perfect 8-of-8 from the free throw line, and 12 points on four 3-pointers by Kenney.  Broekhoff also added nine rebounds, five assists, three steals and a pair of blocked shots, while Buggs posted eight points, five rebounds and a team-best six assists.

Valparaiso (14-5, 4-1 Horizon) turns around quickly to defend the ARC in Horizon League action on Saturday evening at 7:05 p.m. against current league leader Wright State.  As always, the game can be heard live on the Valpo Sports Radio Network and seen online on the Horizon League Network.  ValpoGameday.com is your one-stop shop for live video, stats and interactive chat on one page, while ValpoAthletics.com will have links for live video, audio and stats.