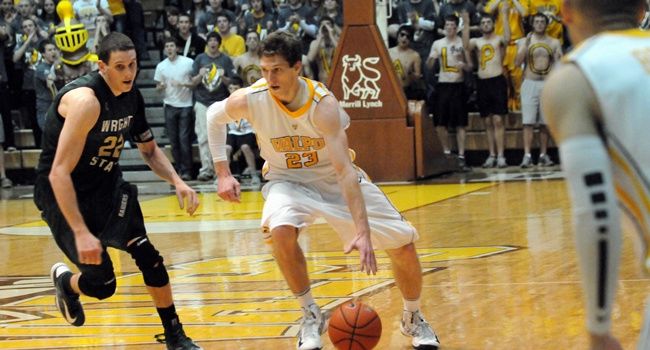 The Valparaiso men’s basketball team scored on its final 10 possessions of Saturday night’s game at the ARC, overcoming a seven-point deficit in the final seven minutes to down Wright State, 69-63.  With the come-from-behind victory in front of a raucous crowd of 4,860, the Crusaders end Saturday in sole possession of first place in the Horizon League standings.

“That’s a very good Wright State team – they run their offensive action very well and are one of the best defensive teams in the country,” said Crusader head coach Bryce Drew.  “I think it took us some time to get used to their tempo and pace on both ends tonight.  Our starters logged more minutes than usual tonight, and did a great job playing without showing any signs of fatigue, especially late.  A big part of that was our crowd – the student section was sensational tonight, the crowd was loud all night long, and I think our guys really fed off the enthusiasm in the building, especially in those last five minutes.”

Trailing by four at the break, the Crusaders utilized the 3-pointer to stay within striking distance, hitting four triples in the first six minutes of the second half, the last two of which came on back-to-back trips from fifth-year senior Will Bogan (Boise, Idaho/Vallivue [Ole Miss]), to tie the game at 42-all.  But Valpo went cold, scoring just two points over the next eight minutes, and a layup by Kendall Griffin gave the Raiders their largest lead at 51-44 with 7:44 remaining.

The teams then started trading points, as Wright State got baskets by Tavares Sledge, Cole Darling and Miles Dixon on three straight trips, countered by a 3-pointer and two free throws from Kenney and another inside hoop from Van Wijk, as the Crusaders were within 57-55 with 2:51 left.  Darling connected on two free throws on the Raiders’ next possession, but Broekhoff answered with a quick-trigger triple off a pass from fifth-year senior Erik Buggs (Memphis, Tenn./Mitchell) to make it just a one-point game as it approached two minutes to play.

Buggs then came up with the defensive play of the night, stepping up and blocking a 3-point attempt from Reggie Arceneaux.  Broekhoff corralled the rebound to give Valpo a chance to take its first lead of the second half, and then the senior was sent to the foul line, where he hit both with 1:29 to play, putting the Crusaders ahead 60-59.

Arcenceaux was fouled on Wright State’s next possession and hit both to return the lead to the Raiders’ side of the ledger, but again Broekhoff stepped up with a key play, driving inside for a tough layup to make it 62-61 Valpo with 54 seconds to play.  The Raiders shot quickly, looking for a two-for-one, but missed, and with about a seven-second difference between the shot and game clocks, Kenney hit Broekhoff for a wide-open 3-pointer with 26 seconds to play to give the Crusaders a 65-61 lead.

Arceneaux returned to the foul line for the Raiders, hitting a pair of free throws to slice Valpo’s lead to two, but facing a full-court press, Broekhoff hit Kenney with an over-the-top pass in stride for an easy fast-break layup to make it 67-63 with 17 seconds left.  Wright State missed a baseline jumper and sent Kenney to the line for a one-and-one.  He missed the front end, but Broekhoff out-leapt everyone for the back tap to retain possession and was fouled with four seconds to play, converting both freebies for the final margin.

It was the play of the senior Van Wijk which led the Crusaders in the first half.  The senior, coming off a career-best performance in Thursday’s win at Detroit, scored 14 points in the first 20 minutes, going 4-of-5 from the floor and 6-of-8 from the foul line.  Valpo led early at 7-5 three minutes in, but Wright State hit a pair of triples in a three-possession stretch to take a lead it would not relinquish in the opening stanza.  The Raider advantage peaked at six points before a late bucket by Van Wijk off a Kenney feed made it 34-30 heading into the locker room.

Broekhoff and Van Wijk tied for team-high honors with 18 points on Saturday, with the former adding 10 rebounds for his fourth double-double in the last five games.  Van Wijk did his damage on 6-of-9 shooting from the field while also grabbing seven rebounds and handing out a career-best four assists.  Kenney finished with 15 points and a team-best six assists.  The Crusaders assisted on 16 of their 21 field goals while committing a season-low seven turnovers.

Wright State (13-5, 4-1 Horizon), which entered the game as the lone unbeaten in the league, got a game-high 22 points from Darling, including a 10-of-13 effort at the free throw line.  Arceneaux was the only other Raider in double figures with 14 points, but went just 3-of-9 from the field.

Valparaiso (15-5, 5-1 Horizon) defends the ARC again on Wednesday evening as Green Bay comes to town for a 7:05 p.m. tip.  The game can be seen exclusively online at ESPN3.com, and as always, can be heard on the Valpo Sports Radio Network.  ValpoGameday.com will feature a live interactive chat to go with live stats on the same page, while ValpoAthletics.com will have links for live video, audio and stats.