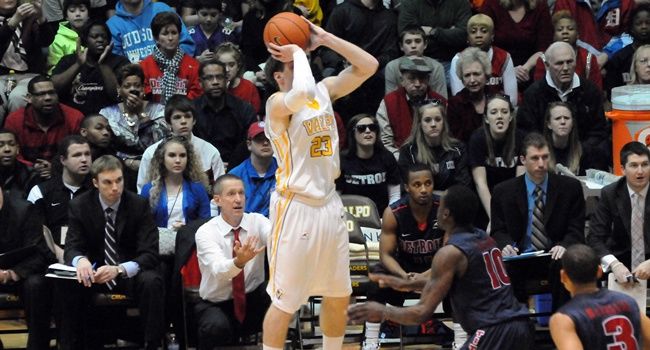 The Valparaiso men’s basketball team led Detroit by 15 points with less than nine minutes remaining in front of a sellout crowd at the ARC and a national television audience on ESPN2 on Saturday evening, but the Titans scored 19 consecutive points to take the lead as the Crusaders eventually fell by a final of 84-74.

“Now we know how they felt back in January – we did it to them at their place, and they did it to us tonight,” said Crusader head coach Bryce Drew.  “We couldn’t get stops on defense in the second half – they shot 67% - and we also turned the ball over too much, and I thought that was the big difference.”

Valpo led throughout the first half Saturday, getting out to a quick 8-2 lead on the back of a pair of triples by senior Ryan Broekhoff (Frankston, Victoria, Australia/Australian Institute of Sport) and an inside bucket from senior Kevin Van Wijk (Hoofddorp, Netherlands/Katholieke Scholengemeenschap Hoofddorp) in the first two minutes.  The Crusaders went scoreless over a nearly five-minute stretch, but gave up just two baskets to the Titans over that time to maintain the lead.

Senior Matt Kenney (Mooresville, Ind./Mooresville) ended the drought with a 3-pointer with 13:13 left in the first half, pushing the advantage back to five points.  The Crusaders’ 3-point shooting and the play of Van Wijk inside helped increase the lead throughout the opening half.  A triple by fifth-year senior Will Bogan (Boise, Idaho/Vallivue [Ole Miss]) gave the Crusaders an 18-9 edge, and following six straight Detroit points, Valpo got a trio of baskets from Van Wijk and 3-pointers from Kenney and Bogan as part of a 12-5 stretch to make it a double-figure lead at 30-20 with 5:13 left in the half.

A layup by fifth-year senior Erik Buggs (Memphis, Tenn./Mitchell) and another 3-pointer by Kenney answered a Nick Minnerath bucket to make it a 35-22 lead with 2:37 to go in the opening stanza.  Minnerath knocked down two more jumpers to cut the lead to single digits, but the Crusaders got a pair of free throws from junior LaVonte Dority (Chicago, Ill./Foreman [USF]) in the final seconds as they led 37-26 at the break.

A pair of layups from Buggs helped get the Crusaders off to a strong start to the second half, as Valpo led 45-32 with 16 minutes to play.  Detroit responded with nine of the next 11 to pull within six points, but the Crusaders countered as Kenney connected on a 3-pointer and Buggs made his way inside for yet another basket.  A little later, Bogan sandwiched another Buggs inside conversion with a pair of triples, and when redshirt junior Bobby Capobianco (Loveland, Ohio/Loveland [Indiana]) hit a free throw with 10:14 to play, the Crusaders earned their largest lead at 61-46.

Kenney answered a mid-range Jason Calliste jumper with a mid-range shot of his own to maintain a 15-point edge at 63-48, but that would mark the start of the Crusader drought.  Over the next six minutes, Valpo would go 0-of-3 from the floor and commit five turnovers, while Detroit scored on eight of its next nine possessions, capped by a pair of putbacks from Evan Bruinsma to give the Titans a 67-63 lead with 3:35 to play.

Broekhoff snapped the scoreless skid with a pair of free throws following the under-four media break, but Minnerath connected from inside to again make it a four-point Detroit advantage.  The Crusaders were never able to make it a one-possession game the rest of the way, with a Bogan 3-pointer with 44 seconds to play bringing them as close as they would get, as it was 76-71 Detroit.  But the Titans hit their last eight free throws to close out the ballgame.

Valpo placed five players in double figures, led by 18 points off the bench from Kenney, who was 6-of-8 from the field, including four triples.  Bogan knocked down a season-best five 3-pointers for 15 points, while Buggs scored 12 points and dished out eight assists.  Broekhoff and Van Wijk each tallied 10 points as well, the latter doing it on perfect 5-of-5 shooting as he also paced Valpo with nine rebounds.  The Crusaders shot 50% (28-of-56) from the field and 11-of-27 (40.7%) from 3-point range, but were undone by 18 turnovers which Detroit turned into 25 points.

Valparaiso (20-7, 10-3 Horizon) returns to action at Loyola on Tuesday, still holding its destiny in its own hands if they win out.  The game can be heard live on the Valpo Sports Radio Network and seen live on the Horizon League Network, with links for live audio, video and statistics available at ValpoAthletics.com.