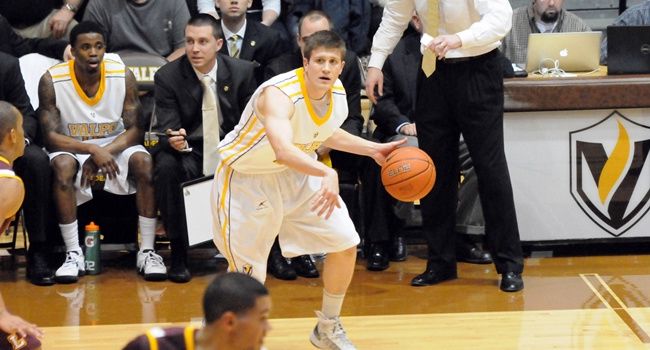 The Valparaiso men's basketball team enjoyed its best shooting performance in over 15 years on Saturday afternoon, cruising to an 82-60 victory over Eastern Kentucky at the ARC in front of a national television audience on ESPNU as part of the Ramada BracketBusters series.

The Crusaders shot 30-of-44 from the floor for the game, hitting 68.2% of their field goal attempts. Valpo went 15-of-23 (65.2%) from the floor in the first half before improving to 71.4% (15-of-21) from the field in the final 20 minutes. The Crusaders missed just four two-point field goal attempts on the afternoon (23-of-27) and hit all 12 of their attempts from inside the arc in the second half. It marked Valpo's top shooting performance since hitting at a 68.8% clip in a win over Northern Illinois in January of 1998.

The first half featured multiple runs both ways. Valpo came out with the first push of the game, opening the contest on an 11-2 run within the first three minutes as fifth-year senior Will Bogan (Boise, Idaho/Vallivue [Ole Miss]) scored five early points and senior Kevin Van Wijk (Hoofddorp, Netherlands/Katholieke Scholengemeenschap Hoofddorp) added a pair of quick baskets. Eastern Kentucky responded with eight points in a row over the next 2:30 to pull back within one point.

After the Colonels tied the game at 13, four different Crusaders scored as part of a 9-2 spurt to push the Valpo advantage up to 22-15 with 9:35 left in the first half. Valpo's lead was still seven points as the clock ticked under eight minutes, but EKU posted eight points in a row, including a four-point play from Timmy Knipp. A pair of free throws by Mike DiNunno with 5:32 remaining in the opening stanza gave the Colonels their first lead at 25-24.

The Crusaders responded by scoring on six of their next seven possessions as a 15-2 run gave them a double-figure lead. Senior Ryan Broekhoff (Frankston, Victoria, Australia/Australian Institute of Sport) started the run with a driving layup, and two possessions later, fifth-year senior Erik Buggs (Memphis, Tenn./Mitchell) found junior LaVonte Dority (Chicago, Ill./Foreman [USF]) for a 3-pointer. Out of the under-four media stoppage, senior Ben Boggs (Roanoke, Va./Hidden Valley [Virginia Tech]) made it back-to-back triples, knocking down a shot from long range out of the corner to make it 32-25.

The next time down the court, Boggs utilized a shot fake before connecting on an 18-footer from the baseline to make it 10 straight points for the Crusaders. After a pair of free throws from EKU, Dority converted while being fouled on the drive, finishing the old-fashioned three-point play, and following a turnover by the Colonels, Buggs drove inside for a layup to close out the 15-2 run with 1:43 left in the first half. DiNunno would score the final basket of the opening period to cut the Crusaders' halftime edge to 10 points at 39-29.

The Crusaders left little doubt as to the eventual result out of the locker room, as Broekhoff and Bogan hit 3-pointers within Valpo's first three possessions to push the lead to 16 points. Eastern Kentucky would close to within 11 points multiple times in the second half, but each time Valpo held the Colonels at bay. All 10 Crusaders contributed to Valpo's 71.4% performance from the floor in the final 20 minutes, as all scored at least two points in a 43-point half while no single player attempted more than three shots.

Valpo featured an ultra-balanced performance from its lineup on Saturday, as nobody attempted more than six field goals, while all but one player had more points than field goal attempts. Bogan and Broekhoff shared team-high honors with 13 points each, Bogan knocking down a trio of 3-pointers as he scored in double figures for the fifth time in the last seven games and Broekhoff reaching double digits despite playing just 20 minutes.

Valparaiso (22-7) looks to secure at least a share of the Horizon League regular season championship, as well as the #1 seed for the league tournament and hosting rights, on Tuesday as the Crusaders play their home finale, hosting Youngstown State at 7:05 p.m. It will be Senior Night, with Valpo honoring its group of six seniors before the game. As always, the game can be heard live on the Valpo Sports Radio Network and seen live on the Horizon League Network, with links for live audio, video and stats available at ValpoAthletics.com. ValpoGameday.com will also be open, featuring the live video, stats and interactive chat, all on one page.