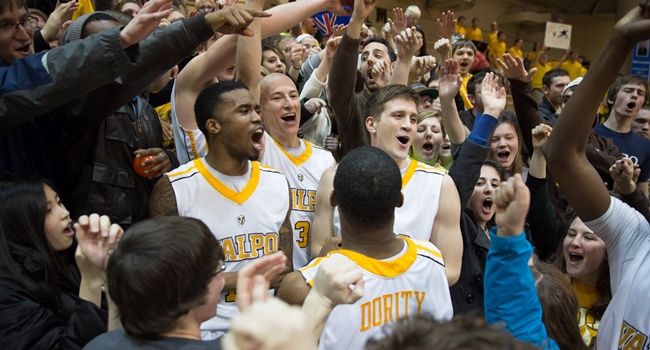 A spirited second-half comeback helped the Valparaiso men’s basketball team overcome a seven-point halftime deficit as the Crusaders defeated Youngstown State, 73-64, on Senior Night Tuesday evening at the ARC.  With the win, Valpo secured at least a share of the Horizon League regular season championship for the second straight year.  The Crusaders also clinched the #1 seed for the upcoming Horizon League tournament, and with it, hosting rights for the league’s championship event.

With the win Tuesday, Valpo improved to 20-1 on its last 21 Senior Nights.  The game was the final regular season contest at the ARC for seniors Will Bogan (Boise, Idaho/Vallivue [Ole Miss]), Ben Boggs (Roanoke, Va./Hidden Valley [Virginia Tech]), Ryan Broekhoff (Frankston, Victoria, Australia/Australian Institute of Sport), Erik Buggs (Memphis, Tenn./Mitchell), Matt Kenney (Mooresville, Ind./Mooresville) and Kevin Van Wijk (Hoofddorp, Netherlands/Katholieke Scholengemeenschap Hoofddorp).  All six, along with former player Tommy Kurth and head manager David Albers, addressed the crowd during the postgame, while senior members of the band, cheerleaders and Crusaderettes were honored prior to the game as well.

The win wouldn’t come easy on Tuesday, however, as the Crusaders faced as much as a 13-point deficit in the opening half.  The game got off to a strong start for Valpo, as Buggs and Broekhoff knocked down 3-pointers on the Crusaders’ first two possessions, and a tip dunk by Broekhoff made it a quick 8-2 Valpo lead.  Van Wijk would score the Crusaders’ next five points, with an old-fashioned 3-point play giving Valpo a 13-7 edge less than four minutes into the ballgame.

Youngstown State would flip the script over the next 13 minutes, however, out-scoring the Crusaders 32-13 over that stretch to claim a 39-26 lead.  The Penguins took their first lead of the game on a layup by Shawn Amiker with 8:58 left in the first half and continued to stretch their advantage, with it peaking on a three-point play from Blake Allen which gave YSU a 13-point lead with less than three minutes to play in the opening half.

Valpo closed the half on a 7-1 mini-spurt to cut the deficit to single digits entering the break, however.  Bogan nailed a three-pointer to start things off, Valpo’s first triple since the second possession of the game, and following a YSU free throw, Broekhoff hit a pair from the charity stripe.  Junior LaVonte Dority (Chicago, Ill./Foreman [USF]) then capped the half with a driving layup with three seconds left on the clock, bringing the Crusaders within 40-33 entering the locker room.

Coming out of the break, a Bogan three-pointer was answered by a three-point play from Allen, as the deficit remained at seven points.  Broekhoff then scored eight straight for the Crusaders, the last three of which came on his second 3-pointer of the half to cut the YSU lead to 45-44 with 13:38 to play.

The Broekhoff triple also started a 12-0 Crusader run over the next four and a half minutes that would give Valpo the lead for good.  After a nearly two-minute stretch of no scoring, Van Wijk hit a free throw to tie the game at 45-all.  The Dutchman then continued to do work inside, tallying a pair of inside layups to give the Crusaders a 49-45 lead, and Kenney then got into the act with a driving basket to push the edge to six points.  Broekhoff closed the run with a pair of free throws with 9:03 remaining to give Valpo a 53-45 advantage.

After a basket by the Penguins ended the run, Bogan found Dority for a 3-pointer to push the lead to nine at 56-47.  Twice more, Youngstown State would cut the lead to six, but the first time saw Dority drive for a layup, followed by a drive and emphatic two-handed slam from Van Wijk to make it 60-50 with 4:11 remaining.  The second time, which came at 60-54, the Crusaders got the job done from the free throw line, with both Van Wijk and Bogan hitting a pair from the stripe.  The exclamation point came via the home run pass over the top of the press, as Broekhoff hit Buggs in stride with 1:22 to play as the Crusaders clinched back-to-back regular season league titles for the first time since the 2002-03 and 2003-04 seasons.

Broekhoff led the charge for the Crusaders on Tuesday, finishing the night with 21 points and 10 rebounds, while Van Wijk posted a double-double as well with 15 points (on 5-of-6 shooting from the floor) and a career-best 14 rebounds.  In fact, Van Wijk recorded a double-double (10 points, 11 rebounds) in the second half alone.  Bogan also finished in double figures, scoring 10 points and adding five assists without committing a turnover.

Valparaiso (23-7, 12-3 Horizon) closes out the regular season on Saturday afternoon at Green Bay at 2 p.m. in a game broadcast live on ESPNU.  The game, as always, can be heard live on the Valpo Sports Radio Network as well, while links for live audio, video and stats will be available at ValpoAthletics.com.