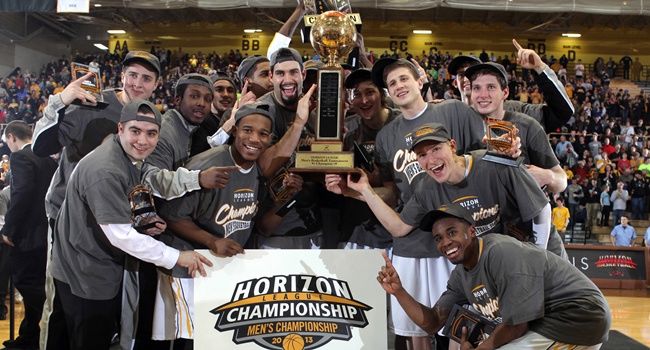 The Valparaiso men’s basketball team is going back to the NCAA Tournament for the first time since 2004 after completing a thrilling 62-54 victory over Wright State to earn the Horizon League tournament championship at the ARC Tuesday night.

The Crusaders were led on Tuesday evening by the standout play of fifth-year senior and tournament MVP Erik Buggs (Memphis, Tenn./Mitchell).  Not to be denied in Valpo’s second consecutive league tournament title game, Buggs drove to the basket time after time, finishing the night with a career-high 22 points on 9-of-13 shooting from the floor to go along with four steals.  Buggs was joined on the All-Tournament Team by senior Ryan Broekhoff (Frankston, Victoria, Australia/Australian Institute of Sport), whose buzzer-beater against Green Bay as part of a 25-point performance sent the Crusaders into the championship.

“This means everything,” said Broekhoff in the post-game press conference.  “The personal accolades are fantastic, but this is what we play for. This is what we put in four hard years for. This is what we have come for when we come to practice every day and grind it out. We worked so hard in the offseason, the pre-season, during the season. All this work was for this moment right now.”

“It means a lot because I played with these guys for four years,” said Buggs.  “Getting over that hump and getting to the NCAA, it not only means a lot to me, but it means a lot to share it with my brothers to that point we have been trying to reach.”

The outcome looked in doubt for the Crusaders, who committed 13 turnovers in the first 12-plus minutes of the second half as Wright State erased an 11-point halftime deficit and took the lead on Valpo.  A 3-pointer by the Raiders’ Reggie Arceneaux with 9:25 to play gave Wright State a 45-42 lead, its first edge since 3-2, and almost four minutes later, Matt Vest knocked down a triple to make it 50-44 Raiders with 5:37 remaining.

But Valpo, as it had in the regular season meeting at the ARC with Wright State, rallied late to earn the victory.  The big late run started with senior Kevin Van Wijk (Hoofddorp, Netherlands/Katholieke Scholengemeenschap Hoofddorp) converting inside while being fouled with 5:13 to play.  Two possessions later, Buggs picked the pocket of AJ Pacher and took it coast-to-coast, bringing the Crusaders within two points.

Broekhoff then came up with a steal on the defensive end, and in transition, Buggs again got to the basket, getting fouled as the clock ticked under four minutes.  Out of the media stoppage, the fifth-year senior calmly knocked down both attempts from the stripe to make it 50-all.  Two possessions later, after a pair of WSU misses from downtown, Buggs again was fouled and hit one of two to return the lead to the Crusaders, 51-50 with 2:53 on the clock.

The biggest shot of the night would come two possessions later.  With the shot clock winding down and the Crusaders still maintaining the one-point lead, Buggs again drove to the basket, looking to get to the rim.  But this time, with the defense collapsing into the paint, Buggs located Broekhoff wide open in the right corner, and the Aussie drained the 3-pointer to push the advantage to 54-50 with 1:49 remaining.

Van Wijk came up with a huge defensive rebound off a Raider miss on the defensive end, and with Wright State playing defense, Valpo again ran the shot clock into single digits.  After a tie-up gave the Crusaders the ball on alternate possession on the baseline with five seconds left to shoot, senior Matt Kenney (Mooresville, Ind./Mooresville) put himself in position underneath to receive the inbounds and drew the foul going up, hitting both to make it 56-50 with 53 seconds to play.

Van Wijk then blocked a Wright State attempt and cleared to fifth-year senior Will Bogan (Boise, Idaho/Vallivue [Ole Miss]), who hit both free throw attempts as the celebration started in the ARC.  Bogan and Van Wijk would each hit one final pair of free throws to close out the Crusader scoring.

“I thought the guys dug deep in their heart and the last five minutes may have been the best five minutes of defense we played all year,” said Drew on the final stretch.

As has been the case so often for the Crusaders this season, they started the game strong, opening the game on a 16-5 run over the opening 5:30.  Bogan and Buggs each had five points during the opening spurt.  The lead swelled to 12 on a fast-break layup by Buggs before the game was ten minutes old, but Wright State responded with eight straight points to close to within 18-14 with eight minutes left in the half.

Valpo responded in kind with a 10-0 run over the next three and a half minutes, getting a pair of baskets from Buggs as four different players scored in the spurt which gave the Crusaders a 28-14 edge with 4:26 left in the half.  Triples by Bogan and junior LaVonte Dority (Chicago, Ill./Foreman [USF]) in the waning minutes helped Valpo maintain a 36-25 lead into the break.

Buggs was joined in double figures on Tuesday by Bogan, who ended the night with 14 points, and Van Wijk, who posted a double-double with 10 points and 10 rebounds.  The Crusaders shot 53.8% (21-of-39) from the floor to offset 25 turnovers.

Wright State (21-12) got a team-best 14 points off the bench from Arceneaux, but he was the only Raider to finish the night in double figures.

Valparaiso (26-7) set a new program record for victories in a single season on Tuesday as well with their 26th win of the 2012-2013 campaign.  The Crusaders will find out their Second Round opponent for the 2013 NCAA Tournament on Sunday evening as CBS unveils the brackets at 5 p.m. on Sunday, March 17.  Valpo will be holding a viewing party for the selection show in the Harre Union ballrooms starting at 4 p.m. on Sunday afternoon – more information about the party will be available in the coming days.