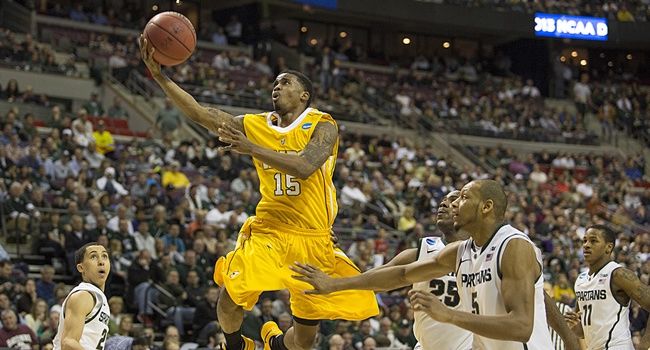 Erik Buggs scored all 14 of his points in the second half. (Jon Hendricks)
Valparaiso at Michigan State | March 21, 2013
Related Links
Related Links

The Valparaiso men’s basketball team was even with third-seeded Michigan State through nearly nine minutes of their Second Round game in the Midwest Region of the 2013 NCAA Tournament Thursday in Auburn Hills, Mich., but the Spartans went on a 24-4 run to pull away as the Crusaders eventually fell by a final score of 65-54.  The loss ends the Crusaders’ season at 26-8 and ends the careers of six Valpo seniors.

“We have a special group of guys, [a] special group of seniors,” said Crusader head coach Bryce Drew.  “I told them I was most proud the last five minutes of the game.  There was no way I was going to take them off the floor when they were playing with that much character, that much heart.  They wanted to play to the final buzzer and they deserve that right to.  I was very pleased as a coach with the looks that we got.  I thought we got quality looks.  And like we told our guys, sometimes we can't control shots going in.  We can control our effort, we can control our character, and I thought over the 40 minutes our effort and character made their coach proud today.”

The Crusader defense was strong early on, holding Michigan State, which entered the game ranked ninth nationally, to just 3-of-14 shooting over the first nine minutes while also forcing a trio of turnovers.  Valpo, which was the 14th seed in the region, found it tough going on the offensive end as well, but got inside baskets in the opening stretch from Matt Kenney (Mooresville, Ind./Mooresville) and Bobby Capobianco (Loveland, Ohio/Loveland [Indiana]) and a 3-pointer by Ben Boggs (Roanoke, Va./Hidden Valley [Virginia Tech]) to have the game tied at eight-all past the second media timeout.

But Michigan State put together its key run over the next eight-plus minutes, hitting nine of its 12 field goal attempts during the 24-4 spurt.  Meanwhile, the Crusaders were just 1-of-10 over the same stretch – a foul-line jumper from Kenney – and also committed five turnovers as the Spartans pulled out to a 32-12 lead with 2:30 left in the half.  Kenney and Ryan Broekhoff (Frankston, Victoria, Australia/Australian Institute of Sport) both made 3-pointers over the closing stretch to counter a triple by Michigan State’s Keith Appling to help Valpo cut the deficit to 35-18 at halftime.

The second half got off to a rough start for Valpo, with Derrick Nix converting a fifth-chance basket for the Spartans.  Erik Buggs (Memphis, Tenn./Mitchell) got to the bucket for a driving layup to kick-start a 14-point second half, but Michigan State scored the next eight points to extend its lead to 45-22 with 15:13 to play.  The Spartans’ largest advantage came a short time later, with 14:15 on the clock and a 49-22 edge thanks to a Gary Harris layup.

The Crusaders would not fold, going on a 9-0 run over a two-minute span as Capobianco and Kenney hit 3-pointers, Buggs got to the basket for a layup and Kevin Van Wijk (Hoofddorp, Netherlands/Katholieke Scholengemeenschap Hoofddorp) hit a free throw to slice the deficit to 49-31.  Later in the half, Valpo put together another run, as trailing by 23, Broekhoff converted an old-fashioned 3-point play and Buggs got to the basket for hoops on three straight trips during a 9-2 spurt which made it 56-40 with 7:04 remaining.

The Crusaders came out of the final media timeout determined to fight to the very end.  Down by 19 with just over three minutes to play. Boggs would score 12 points as Valpo out-scored Michigan State 12-4 over the game’s final stretch.  Both Buggs and Capobianco hit Boggs for 3-pointers during that stretch, while Boggs closed out his career with a steal on the defensive end and a fast-break dunk.

Boggs finished the game as the Crusaders’ leading scorer, pouring in 15 total points in just 11 minutes of action.  Buggs would end the game 7-of-11 from the floor for 14 points, all coming in the second half, and also tallied five steals as Valpo totaled 12 steals and forced 17 Michigan State turnovers.  Kenney also finished in double figures in his final game, scoring 10 points.

Broekhoff was limited to just eight points on 2-of-11 shooting on Thursday, while Van Wijk failed to make a field goal and scored just two points.  The latter did pull down a team-high seven rebounds.  Valpo shot just 35.2% (19-of-54) from the floor for the game, bouncing back from a 23.1% performance in the first half to shoot 46.4% in the final 20 minutes.

Valparaiso ends the 2012-2013 campaign at 26-8 overall, setting a new program record with its 26 victories.  The Crusaders won the Horizon League regular season championship for a second straight year and captured their first-ever league tournament title.

The loss Thursday ended the careers of six successful Crusader seniors.  Boggs totaled 294 points and 151 rebounds over his 57 games in a Valpo uniform, ending his career with his second-highest point output as a Crusader.  Will Bogan (Boise, Idaho/Vallivue [Ole Miss]) appeared in 68 games at Valparaiso as a proficient 3-point shooter, hitting 40.6% of his 3-point attempts as a Crusader and ending his two years with 462 points.

Van Wijk was one of the Crusaders’ most efficient players over his three years at Valpo, setting the program’s all-time record for career field goal percentage (60.8%).  The two-time All-League honoree posted the second-best single-season percentage (63.3%) in team history in 2012-2013 and ended his career with 1,030 points and 426 rebounds, the former making him one of just 32 players all-time to reach the four-figure milestone at Valpo.

Kenney finished up as one of just two players all-time at Valpo to finish with at least 400 rebounds and 300 assists, closing with 450 boards and 330 assists, the latter tenth-most all-time in Crusader history.  He appeared in 130 career games, scoring 876 points.

Broekhoff was simply one of the most outstanding players to ever suit up for Valpo, earning Horizon League Player of the Year honors in 2011-2012 and repeating on the first team this season.  He closed out his career sixth in Crusader history in scoring (1,591 points), tied for second in rebounding (841 rebounds) and was also among Valpo’s all-time top-10 in five other categories.

Buggs suited up for the Crusaders more than any other player who has ever donned the Valpo uniform, playing 138 games for the Brown and Gold.  He finished fourth in Crusader history with 425 career assists, while his five steals on Thursday gave him 157 career thefts, tied for sixth all-time at Valpo.