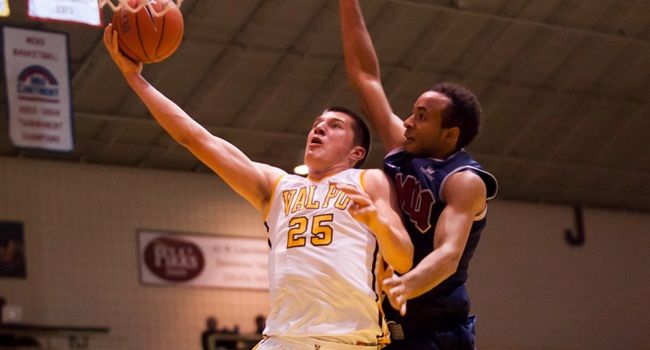 Facing a 10-point halftime deficit, the Valparaiso men’s basketball team had little trouble rallying for a victory, taking the lead less than eight minutes into the second half and going on to an 80-73 victory over Loyola Marymount Saturday afternoon at the ARC.  The Crusaders were led by the second 30-point effort of the season from freshman Alec Peters (Washington, Ill./Washington).

A pair of early 3-pointers from Peters within the first three minutes of the second half helped slice the Lions lead to six points, and a triple from senior LaVonte Dority (Chicago, Ill./Foreman [USF]) made it a 45-42 game with 15:03 to play.  The Dority 3-pointer came during a stretch where Valpo kept LMU from making a field goal over a four-minute span, which eventually allowed the Crusaders to take a 47-46 lead with 12:34 to go on yet another Peters 3-pointer.

The teams would go on to trade the lead a number of times over the next few minutes, as every time LMU scored, the Crusaders had an answer.  Fifth-year senior Bobby Capobianco (Loveland, Ohio/Loveland [Indiana]) converted a layup while going to the ground, senior Jordan Coleman (North Hollywood, Calif./Calabasas [Southwestern Ill. College/Hawai'i]) knocked down a long jumper from the corner, and Peters got inside for a second-chance basket as the two teams fought for control.

LMU held a slim 55-53 lead with 8:31 to play when Valpo finally took the lead for good, as Dority drove to the basket for an old-fashioned 3-point play.  Then, following a Lion miss, junior Vashil Fernandez (Kingston, Jamaica/Princeton Day [Md.] Academy) slipped to the basket after setting a screen for Peters, received the pass and threw down a monster one-handed slam, giving the Crusaders a three-point lead with under eight minutes to play.

It was a 60-59 lead as the clock ticked under seven minutes before Dority cleared a defensive rebound and started a fast break, throwing a lob ahead to Coleman who finished the reverse layup to make it a three-point edge.  Fernandez came up with a blocked shot and rebound on the next defensive possession, and then on the other end, grabbed an offensive rebound and drove across the lane for a sky hook to make it 64-59 Valpo with six minutes left.  The two-possession lead was the Crusaders’ first such advantage of the game and forced an LMU timeout.

Valpo’s lead never fell under four points the rest of the way, as the Crusaders maintained their edge by knocking down free throws.  Valpo went 14-of-19 from the foul line over the final six minutes, ending the night 32-of-41 (78%) from the charity stripe.

The Crusaders held a pair of two-point leads early in the game, as fifth-year senior Moussa Gueye (Thies, Senegal/SEED Academy [Alabama/Lake Land (Ill.) College]) scored Valpo’s first four points.  LMU took early control, though, by hitting 11 of its first 13 shots.  The Lions lead reached double figures at 15-5 just over five minutes into the game, and was as much as 12 in the first half.  The Crusaders were within six with 2:33 to play in the opening period after a Peters 3-pointer, but LMU scored the final four points of the half to take a 39-29 lead into the locker room.

Peters had a strong night shooting the ball for the second 30-point effort of his career, making him just the fifth Crusader over the last 18 years to reach the 30-point milestone multiple times.  The rookie went 9-of-16 from the field, including 4-of-7 from downtown, and also hit 8-of-9 from the foul line.  Peters also tied for team-high honors with eight rebounds as well.

Coleman and Dority scored 12 and 10 points, respectively, to join Peters in double figures, as the backcourt duo combined to go 11-of-12 from the foul line.  Gueye added six points and matched Peters with eight rebounds, six of which came on the offensive end.  Valpo shot just 38.2% (21-of-55) from the floor and made just six 3-pointers, but grabbed 20 offensive rebounds which it converted into 19 second-chance points.

Anthony Ireland led Loyola Marymount (6-4) with 18 points and eight assists, but went just 6-of-18 from the floor.  Evan Payne chipped in 12 points, including eight free throws, while Gabe Levin added 11 points of his own.

Valparaiso (7-5) flies down to Orlando, Fla. for its next two games next weekend at the Jackson Hewitt UCF Holiday Classic.  The Crusaders will take on Southeastern on Saturday afternoon at 5:30 p.m. CT before facing the host Knights at 1:30 p.m. on Sunday.  As always, both games can be heard live on the Valpo Sports Radio Network, with links for live audio and stats available through ValpoAthletics.com.