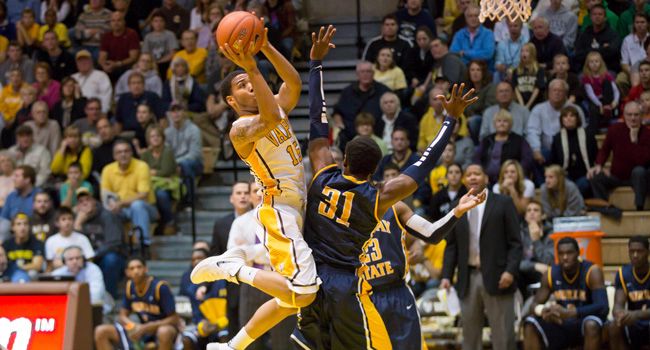 Valparaiso scored on five straight possessions early on in the second half, turning a three-point deficit into a six-point lead, and would never trail again, going on to defeat Detroit, 78-70, Wednesday night at Calihan Hall in Detroit, Mich.

The Crusaders persevered through a turnover-plagued first half to be within one point of the Titans at the break, 31-30.  Valpo committed 14 first-half turnovers, but out-rebounded Detroit 25-7 in the opening 20 minutes, and while Juwan Howard Jr. finished with 16 points in the first half, the Crusaders limited the rest of the team to 5-of-21 shooting.  Valpo trailed by as many as seven in the opening period before a late 9-3 spurt, including five points from freshman Lexus Williams (Chicago, Ill./Marist), brought it back within one at the break.

Valpo earned its first lead since the 12-minute mark of the first half just two minutes into the second period, as junior Vashil Fernandez (Kingston, Jamaica/Princeton Day [Md.] Academy) scored the first five points of the half for the Crusaders, including a 3-point play which put Valpo ahead 34-33.  Detroit responded with the next four points to re-claim the advantage and held a one-possession lead for the next few minutes.

With less than 15 minutes remaining to play, the Crusaders would start the key spurt which gave them the lead for good.  The run started from a somewhat unlikely source, as freshman Clay Yeo (Bourbon, Ind./Triton), who hadn’t scored since Dec. 21, nailed a 3-pointer from the corner on a fast break to tie the game at 41 apiece.  Then fellow rookie Jubril Adekoya (Tinley Park, Ill./Andrew) came up with a steal on the defensive end and hit Yeo, who finished at the rim on the break to give Valpo a 43-41 lead.

Detroit received a pair of free throws from Howard on its next trip, but the Crusaders countered with a layup from Williams to re-claim the lead, this time one they would not relinquish.  Valpo kept the Titans off the board on each of the next two defensive possessions, and would convert on the foul line at the offensive end, as fifth-year senior Bobby Capobianco (Loveland, Ohio/Loveland [Indiana]) hit four free throws to push the lead to 49-43 with 12:41 to play.

The Titans rallied to within one point on a jumper by Howard just past the halfway point of the second half, but the Crusaders responded immediately with five straight points from senior Lavonte Dority (Chicago, Ill./Foreman [USF]) to push the edge back to 56-50.  Then, Valpo hung tough on the defensive end, as despite giving up four offensive rebounds in one possession, the Crusaders forced Detroit to use 1:26 of the remaining 8:49 without scoring a point, as the Titans eventually turned the ball over.

Valpo pushed the lead to its apex at 12 points with 5:35 to go following a fast-break layup from Adekoya off a pretty feed from Williams, a pair of free throws by Dority and a two-handed dunk by Capobianco.  But the Titans answered with seven points on their next three possessions, closing to within 62-57 with 3:29 to go.

The biggest shot of the night came on Valpo’s next trip, though, as an offense which had been stymied by Detroit’s zone on the previous two possessions found Williams open for a triple from the right wing with 3:01 to play.  Then, after a Detroit make, the freshman guard hit Fernandez for a layup with 2:08 to go to make it 67-59.  The Titans were unable to close the deficit under six points the rest of the way, with an emphatic one-handed slam over a defender on the break by Williams putting the exclamation point on the victory.

Williams used a career night to pace the Crusaders on Wednesday, going 5-of-7 from the floor, including a pair of triples, and a 10-of-12 performance from the foul line to score 22 points while also adding four assists.  Dority contributed 20 points as well, going 13-of-16 from the charity stripe, while Adekoya narrowly missed a double-double with 11 points and nine rebounds and Capobianco added 10 points, including eight free throws.

The Crusaders went 19-of-39 from the floor on Wednesday, but were just 4-of-14 from beyond the 3-point line.  Valpo did major damage from the foul line as a team, going 36-of-44 (81.8%) from the stripe.  Adekoya, along with six rebounds from Moussa Gueye (Thies, Senegal/SEED Academy [Alabama/Lake Land (Ill.) College]), led the effort on the boards as the Crusaders out-rebounded Detroit, 36-27.

Detroit (8-11, 1-3 Horizon) received a career night from Howard, who scored 35 points on 13-of-23 shooting to go with four rebounds and four assists.  Matthew Grant scored 14 points off the bench and Evan Bruinsma scored 10 points in the second half, but the rest of the squad combined for just 11 points.

Valparaiso (10-9, 2-2 Horizon) returns home for a regionally-televised league game against Milwaukee on Saturday afternoon.  The game, which can be seen locally on Comcast SportsNet Chicago, will tip at 1 p.m., and as always can be heard on the Valpo Sports Radio Network as well.  Links for the live video and audio, as well as live stats, will be available at ValpoAthletics.com.