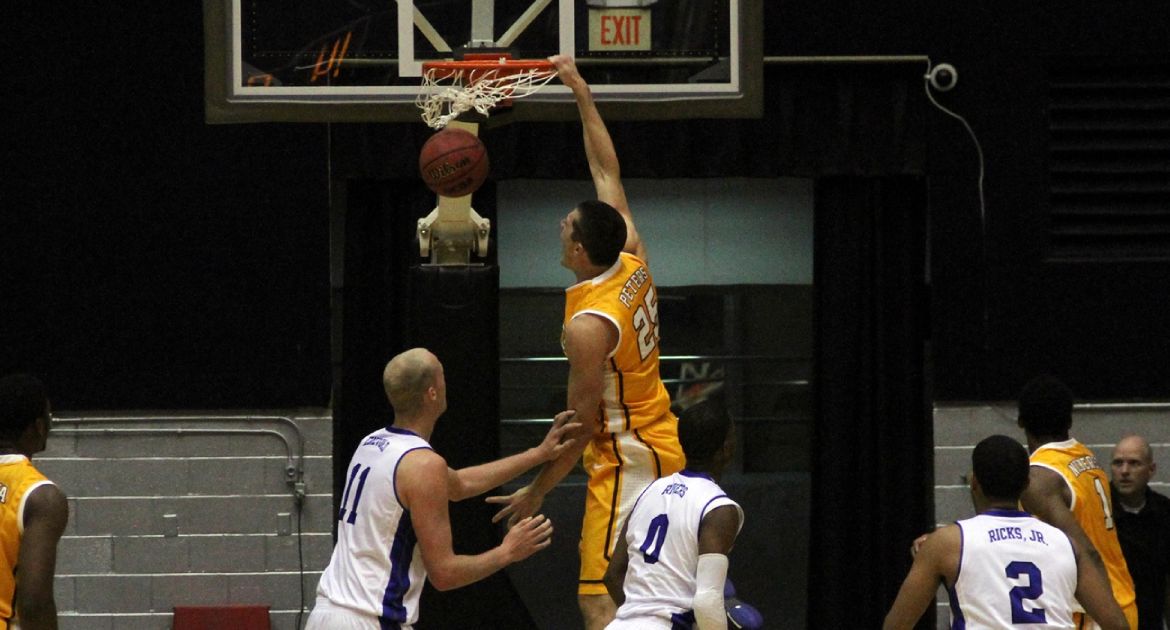 For the third consecutive game, Valparaiso never trailed, as the Crusaders rolled to a 66-46 victory over Drake in both teams’ opener at the Challenge in Music City in Nashville, Tenn. on Friday evening.

The Crusader defense was strong all game, but was at its best over the opening ten minutes, as Valpo limited Drake to just three points in that stretch.  The Bulldogs went just 1-of-7 from the field over that stretch, while the Crusaders forced Drake into five turnovers over the first 25% of the game as well.

Offensively in the opening minutes, the Crusaders got baskets from freshman Tevonn Walker (Montreal, Quebec/Vanier College) and senior Vashil Fernandez (Kingston, Jamaica/Princeton Day [Md.] Academy) on two of their first three possessions to claim a lead they would never relinquish.  Nearing the halfway mark of the first half, Valpo scored seven points in three trips – thanks to a putback from sophomore Jubril Adekoya (Tinley Park, Ill./Andrew) and back-to-back baskets, the second a 3-pointer, from sophomore Alec Peters (Washington, Ill./Washington) – to push its edge to 13-3 and force a Drake timeout.

The Bulldogs rallied a bit and would close to within five points on a few occasions, but Valpo always kept the lead at least at two possessions.  The advantage would be eight points at the half at 29-21, thanks to a pass from freshman David Skara (Zadar, Croatia/Ekonomska Skola Zadar) to Peters for a layup inside the final minute.  The Crusaders owned an eight-point halftime edge despite going just 1-of-11 from 3-point range in the opening 20 minutes, as they were strong inside, going 11-of-15 from inside the arc.

Junior Darien Walker (Chicago, Ill./Simeon [John A. Logan/Arizona Western]) almost single-handedly put away the Bulldogs to start the second half.  After the Crusaders had an empty possession on their first trip, Walker scored on three straight times down the court, sinking a pair of 3-pointers around a fast-break layup off a nice feed from junior Keith Carter (Maywood, Ill./Proviso East [Saint Louis]) to push Valpo’s lead to 14 points just over two minutes into the second half.  Walker then drained another triple two minutes later to make it 41-23 Crusaders.

Carter would then pick up where Walker left off, hitting two 3-pointers in a three-possession span a few minutes later as Valpo’s lead grew to over 20 points.  Carter added a third 3-pointer with 5:12 to play, making it 62-38 Valpo as the Crusaders cruised in the late stages.

Walker and Carter combined for 23 of Valpo’s 37 second-half points as they finished as the Crusaders’ two leading scorers on the night.  Walker went 7-of-14 from the field for a game-high 19 points, while Carter went 5-of-8 for 15 points while also handing out three assists without any turnovers.  Peters added ten points, all of which came in the first half, and six rebounds as well.

After hitting just 1-of-11 from downtown in the first 20 minutes, the Crusaders were 6-of-10 from deep in the second half.  Valpo finished with a slight 33-30 edge on the glass over the Bulldogs, led by seven boards from Fernandez.  The Crusaders took care of the ball extremely well on Friday, turning it over just four times – the lowest total by a Valpo team in recent history.

Jordan Daniels led Drake (1-4) with 18 points off the bench, but was the only Bulldog to finish in double figures.  The Crusaders limited Drake to just 35% shooting from the field and forced 15 turnovers, converting those into 16 points.

Valparaiso (5-1) continues play from Nashville on Saturday night against Murray State.  Tipoff is slated for 7:30 p.m., and all the action can be heard live on the Valpo Sports Radio Network.  Links for live audio and stats will be available at ValpoAthletics.com.