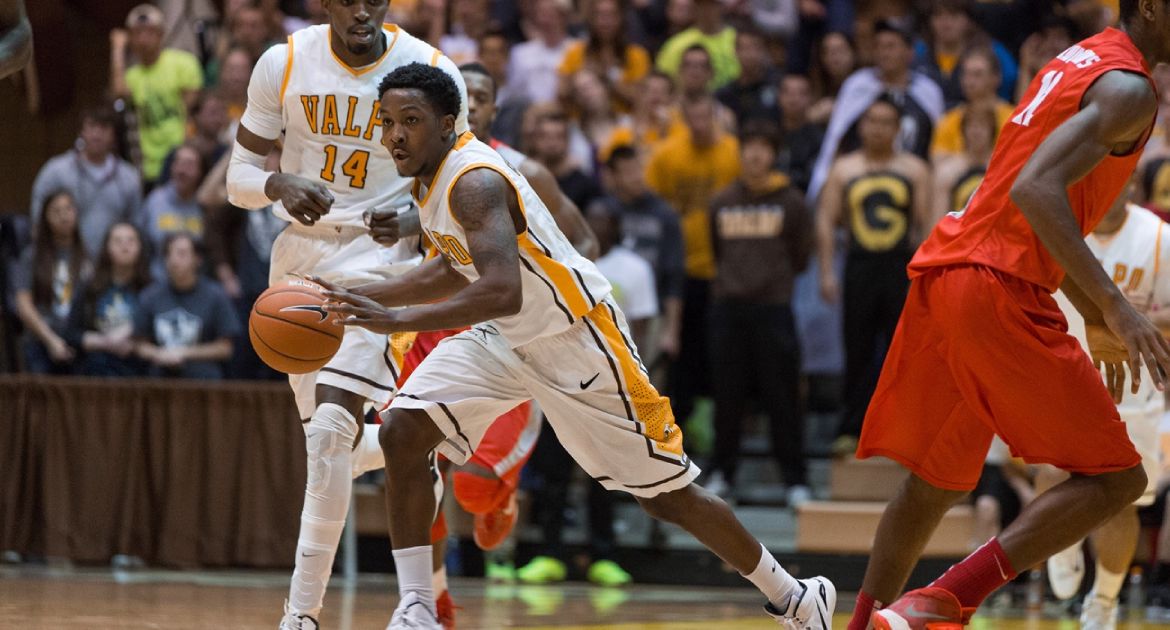 The Valparaiso men’s basketball team suffered through its worst shooting night at the ARC in over 14 years on Saturday night, falling to New Mexico by a 63-46 final.

Valpo shot just 16-of-53 from the floor (30.2%), its worst field goal percentage in a home game since hitting 28.8% from the field in a loss to Western Illinois on Jan. 22, 2000.  The woes from the floor spread up and down the lineup, as no Crusader connected on better than half of their field goal attempts and none of the eight Valpo players who took the floor finished in double figures in points – sophomore Alec Peters (Washington, Ill./Washington) led the way with nine points.

As opposed to the last seven games, when the Crusaders had never trailed by more than one possession, Saturday saw New Mexico run out to the early lead, as the Lobos led 10-4 just over five minutes into the game.  Valpo would score nine of the next 13 points, capped by a 3-pointer from Peters, to crawl back into the game, as the trifecta left the Crusaders trailing 14-13 halfway through the opening period.

The two squads traded baskets – Valpo’s coming on a dunk by senior Vashil Fernandez (Kingston, Jamaica/Princeton Day [Md.] Academy) – but following Fernandez’s slam, the Crusaders went cold, going scoreless for the next four-plus minutes as the Lobos pulled ahead by six at the 5:04 mark.  Valpo made it a one-possession game once again with 3:42 to play in the half on a triple courtesy of junior Keith Carter (Maywood, Ill./Proviso East [Saint Louis]), but would not score the remainder of the half as New Mexico ended the first period on a 7-0 run to take a 30-20 lead into the locker room.

Valpo was able to get the game into single digits twice in the second half, but couldn’t sustain the momentum to cut any further into the Lobos’ advantage.  Junior Darien Walker (Chicago, Ill./Simeon [John A. Logan/Arizona Western]) hit a 3-pointer with 16:20 remaining to make it a 36-27 game, but New Mexico’s Xavier Adams answered with a triple of his own just 18 seconds later.

The Crusaders’ final burst came around the midway point of the second half, as trailing 45-31, Valpo pieced together a 10-4 run over a four-minute span, with a pair of free throws from junior E. Victor Nickerson (Atlanta, Ga./Norcross [Charlotte]) bringing the Crusaders within 49-41 with 8:13 to go.  But with the crowd on its feet urging the Valpo defense on, the Lobos’ Tim Jacobs knocked down a runner, and then following a Crusader miss, Hugh Greenwood nailed a 3-pointer on the break to slam the door on any potential comeback.

Peters’ nine points led the way for Valpo, with Nickerson adding eight off the bench and Carter chipping in seven.  The Crusaders’ shooting woes were exacerbated beyond the 3-point line, as Valpo went just 3-of-22 from beyond the arc.  Carter added team highs of four assists and four steals as well.

Deshawn Delaney paced four New Mexico (5-3) players in double figures with 17 points.  Greenwood, Obij Aget and Devon Williams all added ten points each as the Lobos shot 52.3% (23-of-44) from the field.  New Mexico recorded a 38-28 advantage on the glass over the Crusaders, led by six boards apiece from Delaney, Williams and Sam Logwood.

Valparaiso (8-2) looks to rebound on Wednesday as it hosts Trinity International for a 7:05 p.m. tip.  As always, all the action can be seen live on the Horizon League Network/ESPN3.com and heard live on the Valpo Sports Radio Network.  Links for the live video and live audio, as well as live stats, will be available at ValpoAthletics.com.