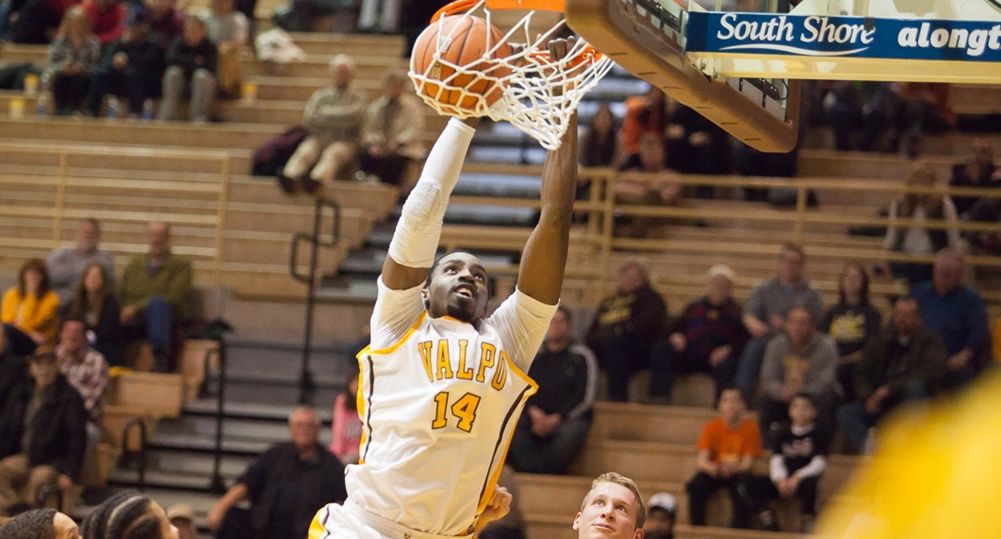 Valparaiso enjoyed one of its most efficient offensive performances of the season at the ARC Thursday evening in cruising to an 85-56 win in Horizon League action over UIC.

Despite playing without the services of normal starting point guard Keith Carter (Maywood, Ill./Proviso East [Saint Louis]) due to injury on Thursday, the Crusader offense didn’t miss a beat.  Valpo connected at a season-best 60.4% clip (32-of-53) from the field and registered 14 assists while committing just eight turnovers – its fifth single-digit effort of the year in the turnover column.  The Crusaders took advantage of UIC time and again down low, out-scoring the Flames in the paint 50-14.

Thursday’s win was the epitome of a total team effort, as all nine Crusaders who dressed scored at least four points, with five finishing in double figures.  Leading the way was senior Vashil Fernandez (Kingston, Jamaica/Princeton Day [Md.] Academy), who posted a career-high 15 points as he hit all six of his field goal attempts.  Fernandez also grabbed eight rebounds and blocked four shots in the winning effort.

Junior Darien Walker (Chicago, Ill./Simeon [John A. Logan/Arizona Western]) finished with 13 points on 5-of-9 shooting and added four rebounds, while sophomore Alec Peters (Washington, Ill./Washington) and freshman Tevonn Walker (Montreal, Quebec/Vanier College) each hit better than half of their field goal attempts for 11 points apiece.  Peters grabbed six rebounds as well.  Rounding out the quintet in double figures was a 10-point effort off the bench by sophomore Jubril Adekoya (Tinley Park, Ill./Andrew), who went 4-of-5 from the floor and tallied a game-high nine rebounds.

Both teams started out hot from the floor, with UIC gaining an early 12-8 edge just over four minutes into the game on a 3-pointer from Jay Harris.  Valpo scored the next seven points, however, to take the lead for good, as Nickerson started the spurt with a layup and Peters completed an old-fashioned 3-point play on the fast break.  Three times, UIC would close to within one point as the first half approached the midway point, but each time, the Crusaders answered with a bucket of their own, twice on inside baskets from Peters and the last on a triple by Joseph.

The lead remained around single digits for much of the rest of the first half, as a jumper from Harris brought the Flames within 33-26 with 5:29 to play in the period.  But Valpo would end the half on a 14-6 run to take a 47-32 lead into the locker room.  Fernandez had three inside baskets during the half-closing spurt, including a monster two-handed jam after grabbing an offensive board, while Peters closed the half by going coast-to-coast after grabbing an offensive rebound in the final seconds.

The Crusaders put the game away right from the onset of the second half, out-scoring the Flames 19-9 over the first eight minutes of the period as three 3-pointers were UIC’s only offense during that stretch.  Darien Walker had six points during that span, while Tevonn Walker added five points and Fernandez capped it with a baseline sky hook to set a new career best.  Valpo would continue to pull away from there, going ahead by 30 for the first time on Adekoya’s first 3-pointer of the season with 8:02 to play.

UIC (5-13, 1-2 Horizon) was led by 13 points from Ahman Fells, including three 3-pointers.  Harris, making his return to the ARC after spending his first two collegiate seasons as a Crusader, finished with eight points in 22 minutes of action.  The Flames finished the game at just 32.8% from the field, including just 8-of-28 from downtown.

Valparaiso (15-3, 2-1 Horizon) faces a stern test on Saturday when Horizon League leader Cleveland State – currently sitting at 3-0 in the league standings – comes to the ARC.  Tipoff is slated for 7 p.m., and as always, all the action can be heard live on the Valpo Sports Network and seen live on ESPN3.com.  Links for the live audio and video, as well as live stats, will be available at ValpoAthletics.com.