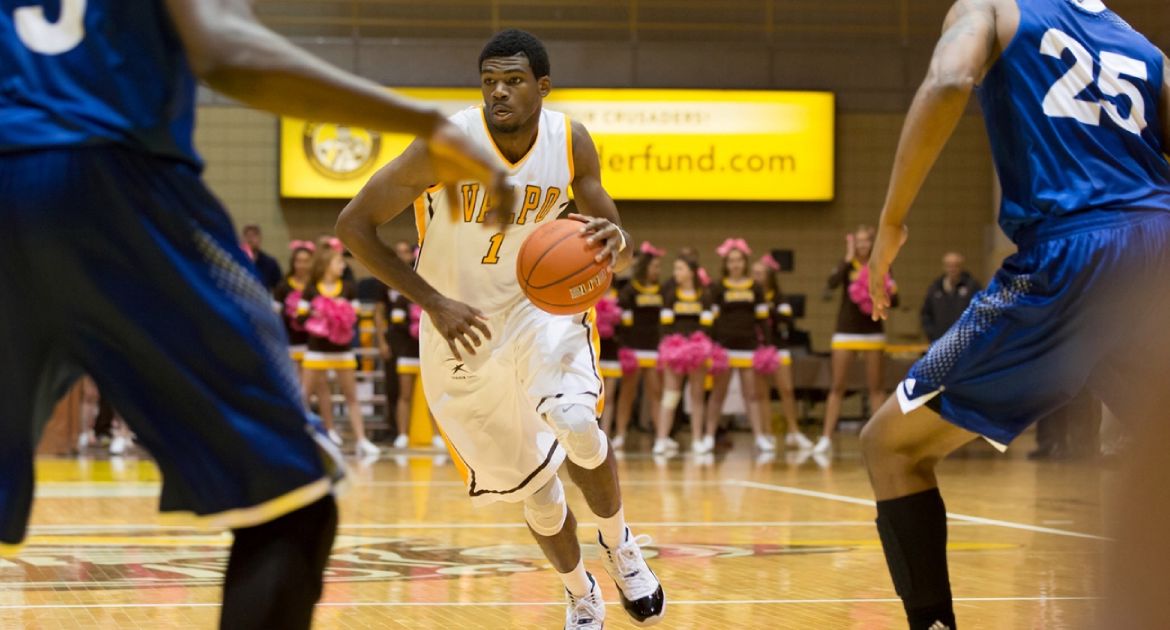 The Valparaiso men’s basketball team had two chances to take the lead inside the final 20 seconds Friday evening in a battle of league leaders at Green Bay, but couldn’t get either shot to fall, as the Phoenix earned the 51-50 victory over the Crusaders.

The defensive battle was destined to come down to the final possession, as neither team led by more than four points in the second half.  With two minutes to play, freshman David Skara (Zadar, Croatia/Ekonomska Skola Zadar) grabbed a defensive rebound and kicked it ahead on the break to fellow rookie Tevonn Walker (Montreal, Quebec/Vanier College), who finished at the rim to put the Crusaders in front, 50-49.  But the Phoenix came down and got an inside basket from Greg Mays to re-take a one-point lead.

Valpo missed on its next trip, and following a Green Bay miss, the Phoenix’s Jordan Fouse grabbed an offensive rebound to keep possession with the shot clock turned off.  The Crusaders fouled twice to put Green Bay in the bonus, and with 30 seconds to go, Alfonzo McKinnie missed the front end of a one-and-one and Walker grabbed the rebound to give the Crusaders a chance to gain the lead.

Following a timeout, Walker drove inside but couldn’t finish at the rim, and the rebound went out off of Valpo.  The Crusaders were forced to foul again and did so with 10.6 seconds to play, sending Carrington Love to the charity stripe.  Again, the Phoenix missed the front end of the one-and-one, giving Valpo one more chance.  The Crusaders ran the ball up the court and put it in the hands of E. Victor Nickerson (Atlanta, Ga./Norcross [Charlotte]), but the junior couldn’t get his runner to fall, as Valpo fell just short of its third straight road win.

The last few minutes were a microcosm of the entire game, a defensive struggle both ways, especially in the second half.  Both teams had long stretches without scoring – the Crusaders’ stretch came first, as a free throw from Vashil Fernandez (Kingston, Jamaica/Princeton Day [Md.] Academy) with 17:02 to play would be their final point for over five minutes.  But despite not scoring for that span, Valpo gave up just seven points in that same stretch to stay within striking distance, as a pair of free throws by Jubril Adekoya (Tinley Park, Ill./Andrew) with 11:53 remaining made it a 43-41 game.

Meanwhile, Keifer Sykes hit a 3-pointer for Green Bay to put them up by four points (43-39) with 14:05 to play, but the Crusaders kept the Phoenix off the board for a stretch of nearly seven minutes and took a 44-43 lead on an inside basket by Fernandez.  Jordan Fouse snapped the Phoenix skid with a deep jumper with 7:18 to go to re-gain the advantage, and the two squads would trade baskets twice over the ensuing five minutes to set up the closing stretch.

Valpo got off to a quick start, scoring the game’s first five points and taking a double-digit lead at 19-9 just 8:38 into the ballgame.  But the Phoenix scored the next seven points over a span of 1:36 to close within three points, and while the Crusaders never surrendered the lead in the opening period, Green Bay stayed close the entire way.  A dunk by Nickerson made it 34-29 Valpo with 2:15 to play in the half, but Greg Mays responded with a dunk of his own and added a free throw with 1:18 left in the period as the Crusaders carried a 34-32 lead into the locker room.

Nickerson was the only Crusader to finish in double figures, scoring 10 points to go with five rebounds.  Alec Peters (Washington, Ill./Washington) added nine points, all of which came in the first half, while Fernandez scored eight points and blocked four shots.  Walker chipped in seven points and led all players with 13 rebounds.  Valpo finished the night shooting just 34.5% from the field, including just a 5-of-27 mark in the second half, and was just 2-of-10 from 3-point range.

Green Bay (17-4, 6-1 Horizon) was led by 11 points apiece from Alfonzo McKinnie and Sykes.  Sykes was limited to easily his roughest night to date in Horizon League play, as the preseason Player of the Year was just 4-of-17 from the field.

Valparaiso (18-4, 5-2 Horizon) returns home Monday evening to host Milwaukee at 7:05 p.m.  As always, the game can be heard live on the Valpo Sports Network and seen live on ESPN3.com, with links for the live audio and video, as well as live stats, available through ValpoAthletics.com.