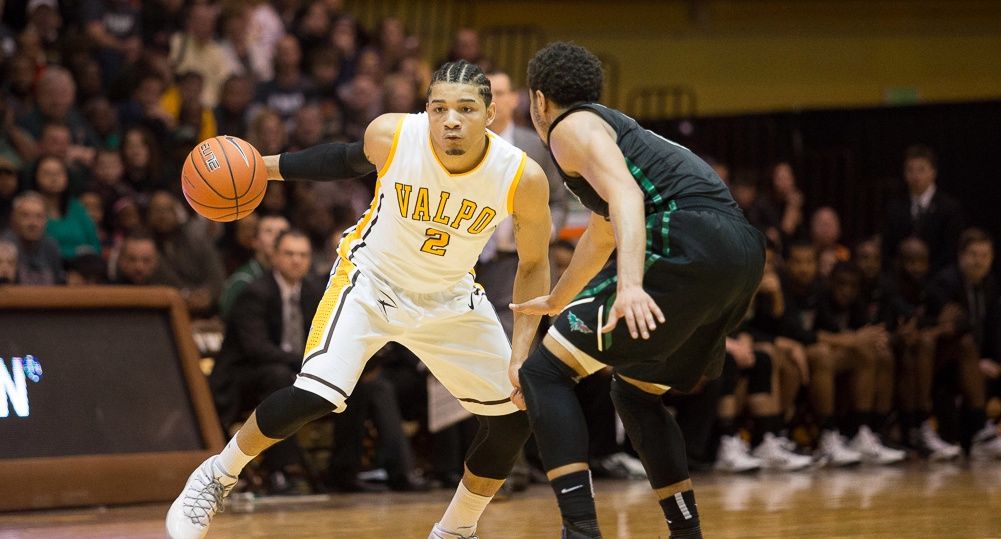 The Valparaiso men’s basketball team moved into first place by itself atop the Horizon League standings Friday night, as the Crusaders led by as many as 15 points in the second half and held off Green Bay down the stretch to earn a 63-59 victory over the Phoenix in front of a packed house and a national television audience.  With the win, Valpo improves to 23-4 overall and 10-2 in league play.

The Crusaders led by six at the half thanks to a nifty scoop layup from freshman David Skara (Zadar, Croatia/Ekonomska Skola Zadar) right before the halftime horn.  Valpo then extended the halftime lead out of the break thanks to big plays from another rookie, Tevonn Walker (Montreal, Quebec/Vanier College).  On the first possession of the half, senior Vashil Fernandez (Kingston, Jamaica/Princeton Day [Md.] Academy) hit Walker underneath for a layup.  Three trips later, the Crusaders missed a fast-break layup opportunity, but Walker was there for the tip-in, extending the lead to 33-23 and forcing a Green Bay timeout.

Out of the timeout, the Phoenix cut into Valpo’s lead, with a fast-break basket from Keifer Sykes bringing Green Bay within six points at 35-29.  But on the next offensive possession, sophomore Alec Peters (Washington, Ill./Washington) earned a trip to the foul line, scoring his first two points of the game and sparking a personal 10-1 run.  Over the next three minutes, the sophomore reached double figures in the scoring column, converting a pair of old-fashioned 3-point plays – the second of which gave the Crusaders a 45-30 lead with 12:23 remaining.

The Crusaders went cold at that point, unable to score over a span of nearly five minutes, but the defense held strong, surrendering just eight points over the same stretch to Green Bay as the Phoenix closed to within 45-38.  A layup by sophomore Jubril Adekoya (Tinley Park, Ill./Andrew) started a five-point spurt over 90 seconds from the sophomore, and when Walker canned a 3-pointer with 5:20 to play, the lead was back up to 53-39.

Green Bay would not go away, cutting the deficit down to 10 points and then knocking down back-to-back 3-pointers courtesy of Daeshon Francis and Carrington Love to move to within 56-49 with 2:34 to play.  Two possessions later, Peters hit two free throws to push the lead back to nine points, but Valpo would miss its next five free throw attempts.

While the Crusaders couldn’t connect from the line, the Phoenix continued to close, as Jordan Fouse converted a layup inside and then grabbed a missed free throw and hit a short jumper as the lead was cut to four points.  Junior E. Victor Nickerson (Atlanta, Ga./Norcross) finally broke the string of missed free throws by hitting the back end of a two-shot foul, but a triple by Love with 35 seconds left made it a one-possession game at 59-57.  But two points was as close as the Phoenix would get down the stretch, as first Nickerson and then Walker stepped up and hit two free throws in the final seconds.

Green Bay led early on, but an 8-0 run by the Crusaders – including six points from Walker – put Valpo ahead 11-5 just under seven minutes into the game.  The Phoenix fought back to twice tie the game in the late stages of the first half, but the second time, Walker would knock down a 3-pointer with 4:27 to play in the half, a shot which would give Valpo the lead for good.  The lead was just two points entering the final minute of the period, but first freshman Max Joseph (Montreal, Quebec/Vanier College) and then Skara hit driving shots in the final 60 seconds to make it a 29-23 edge at the break.

Walker led all players with his second-best offensive outing of the year, going 7-of-12 from the field for a game-high 20 points.  Peters was the only Crusader to join Walker in double figures, scoring 12 points despite going scoreless in the first half.  In fact, the sophomore had a double-double in the second half alone, as after entering halftime with no points and no rebounds, Peters ended the night with 12 points and 10 boards.

Valpo shot just 37.3% from the floor for the game, but took full advantage of limited 3-point attempts, going 4-of-7 from downtown.  The Crusaders out-rebounded Green Bay 45-30, led by Peters’ 10 boards and eight rebounds by Fernandez, who also blocked three shots.  Skara handed out a team-best three assists and also came up with two steals.

Love paced Green Bay (20-6, 9-3 Horizon) with 15 points, one of four Phoenix starters to end the night in double figures.  Greg Mays tallied 10 points, four assists and five blocked shots, as Green Bay blocked 11 shots on the evening.  The Crusaders limited the Phoenix to just 32.7% shooting from the field and just 5-of-15 from behind the 3-point line.

Valparaiso (23-4, 10-2 Horizon) assumed full control of first place as Cleveland State, which entered the night tied with the Crusaders and the Phoenix atop the league standings, lost at Detroit.  The Crusaders will take the court next Sunday afternoon at Milwaukee for a 1 p.m. tip.  As always, the game can be seen live on ESPN3.com and heard live on the Valpo Sports Network, with links for live coverage available at ValpoAthletics.com.