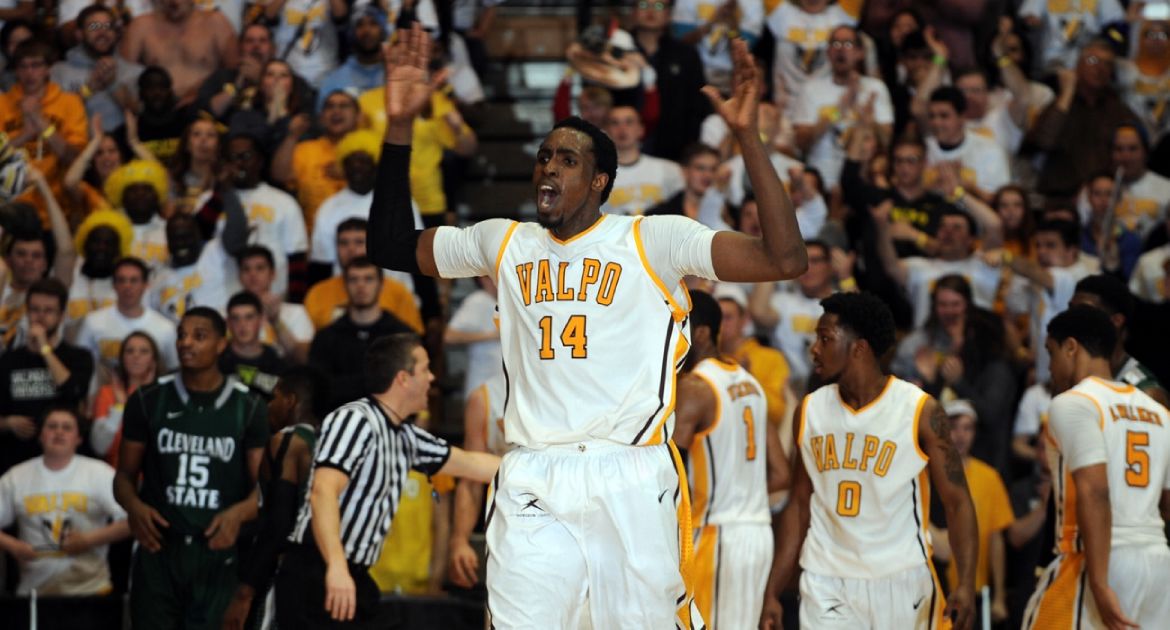 Next Up in Crusader Basketball: 40 minutes away from a second Horizon League Championship in three years and a berth in the NCAA Tournament, all that stands in Valparaiso’s way is the second-seeded Green Bay Phoenix. The Crusaders and Phoenix will tip off at 6 p.m. on Tuesday evening at the ARC, live on ESPN.

Last Time Out: The Crusaders advanced to the Horizon League Championship title game on Saturday night at the ARC, ending the game on a 7-2 run and earning a 60-55 victory over fourth-seeded Cleveland State. Alec Peters scored four points in the final minute, including a key layup with 41 seconds to play, to cap a 22-point performance. The win was the 27th of the year for the Crusaders, setting a new program single-season record.

Head Coach Bryce Drew: Bryce Drew (93-41) is in his fourth season at the helm of the Crusader men's basketball program in 2014-15. In his first three years, Drew led Valpo to 66 victories and postseason berths in each of his three seasons. The 2012 and 2015 HL Coach of the Year, Drew ascended to the head coaching position on May 17, 2011 after spending six seasons as an assistant and associate head coach with the Crusaders.

Series Notes: Green Bay leads the all-time series over Valpo, 28-21, but the two squads have split 18 meetings since the Crusaders joined the Horizon League prior to the 2007-08 campaign. Valpo is 7-3 at home against the Phoenix over the last eight years and has won five straight home games, including a 63-59 triumph back on February 13. The two teams each won at home this season during the regular season, as Green Bay claimed a 51-50 win at the Resch Center in the first meeting of the year.

@ValpoBasketball...
...and the @HorizonLeague
- @ValpoBasketball was picked to finish in fourth place in the league standings in 2014-15 in preseason polling.
- The Crusaders have now not finished worse than their preseason projection in the last five years.
- Sophomore Alec Peters was the lone underclassman on the preseason #HLMBB First Team All-League squad.

...notes from Cleveland State
- The five-point win was Valpo’s ninth straight single-digit decision - the Crusaders are 8-1 over that stretch.
- Alec Peters scored at least 20 points for the 11th time this season.
- Peters scored 16 of his 22 points after intermission.
- Darien Walker scored the game’s first seven points and ended with 12 points, his fifth straight game in double figures.
- After hitting just one of their first four free throws, the Crusaders hit 16 of their last 19 attempts from the charity stripe.
- Valpo limited Trey Lewis to just 10 points - Lewis averaged just 9.3 ppg (5-24 3PT) in three games against the Crusaders this season.
- The Crusaders went with a crunch-time lineup of Nickerson, Carter, Darien Walker, Peters and Fernandez in the last ten minutes.
- The lineup played a total of 17 minutes on Saturday after playing just 10 minutes together all year, including just 31 seconds in #HLMBB play.

...looking ahead
- Valpo will learn its postseason destination, whether the NCAA Tournament or the Postseason NIT, on Sunday evening.

Heading to the Postseason Again
- The regular season title also secures at worst a berth in the postseason NIT for the Crusaders.
- This marks the fifth straight season Valpo will appear in postseason play and the 14th time in the last 20 years.
- Every four-year senior class since the 1995 class has made at least one postseason trip.

Hitting 27 Wins
- @ValpoBasketball reached 27 wins on the year with the semifinal win over Cleveland State on Saturday.
- The Crusaders are one of just 13 teams in the nation with at least 27 wins as of the end of play Sunday.
- The Crusaders earned their 20th win at UIC on Jan. 31 - they had previously never reached their 20th win before Feb. 12 (2012-13).
- Valpo has now won at least 20 games 14 times in the last 22 years, including three times in four seasons under Bryce Drew.

Young Guns
- Valpo won the outright #HLMBB title despite being an underclassman-laden squad.
- The Crusaders have just one senior in their regular rotation and have five underclassmen among their nine players averaging 10+ minutes.
- Valpo ranks 261st nationally in Ken Pomeroy’s Experience metric, with only Kentucky and Duke ranking lower among teams with 26+ wins.
- The Crusaders are the least-experienced team in the Horizon League, with Detroit (207th) the next least-experienced squad.

Hitting the Glass
- Valpo has out-rebounded opponents by double figures 13 times on the year, including most recently a +12 edge in the win over WSU.
- The Crusaders outrebounded Wright State by 21 earlier this year - best vs. a D-I opponent since a +22 advantage on the glass last year vs. Saint Louis.
- Valpo has only been outrebounded on three occasions this year - losses to New Mexico and Missouri, and the regular season finale at CSU.
- The Crusaders’ league-leading rebounding margin sits at +7.6, good for 11th in the nation.
- Valpo leads the league in rebounding margin by five boards/game, and also paces the circuit in both offensive and defensive rebounding pct.

Defensive Prowess
- The Crusaders held 13 of 16 opponents to 65 or fewer points in #HLMBB play.
- Earlier this year, Valpo held three straight foes to 56 points, the first time it won 3 straight games and gave up 56 or fewer points in all three since Dec. 7-17, 1983.
- Valpo ranks 26th nationally in scoring defense and 14th in field goal percentage defense.
- Valpo boasts a defensive efficiency of 95.1, 47th-best nationally - the Crusaders haven’t ranked in the top-100 since 2006-07.
- Crusader opponents are shooting just 42.3% from 2-point range (16th nationally) and are pulling down just 27.4% of available offensive boards (37th nationally).

What’s Back and Who’s New
- @ValpoBasketball returns just seven letterwinners from its 2013-14 team, returning 48.3% of scoring and 56.8% of rebounding.
- Nearly half of the Crusader roster (6 of 14 players) is new to the program this season.
- Five players are eligible for the first time this season, including Charlotte transfer E. Victor Nickerson, who sat out at Valpo last year.
- Darien Walker came to Valpo from junior college, while Max Joseph, David Skara and Tevonn Walker are all true freshmen.
- Shane Hammink (LSU) and Chandler Levingston Simon (UMKC) both transferred to Valpo last off-season and have to sit out this year.

The International Flavor
- This year’s squad continues the international pipeline that @ValpoBasketball has cultivated over the past two decades.
- The Crusaders boast five international players on this year’s roster from four different countries.
- Represented are Canada (Joseph, T. Walker), Croatia (Skara), Jamaica (Fernandez) and Netherlands (Hammink).
- The duo from Canada mark the first Canadian players in program history.
- Over the past two decades, @ValpoBasketball has welcomed 31 international players from 18 different countries.
- Crusader signee Daniel Relvao is from Portugal and will become the first Portugese player in program history when he joins in 2015-16.

In the Crusaders’ Future
- Daniel Relvao and Derrik Smits have both signed NLIs to join @ValpoBasketball as freshmen for the 2015-16 campaign.
- Relvao (6’9”, 235 lbs.) hails from Coimbra, Portugal and currently plays prep ball at Mountain Mission [Va.] School.
- Relvao averaged 8.2 ppg, 5.2 rpg and 3.3 bpg for Portugal last summer in Division B of the FIBA U18 World Championship.
- Smits (7’0”, 230 lbs.) will join Valpo from Zionsville [Ind.] H.S., where he averaged in double figures last season & also posted 3.6 rpg and 1.8 bpg.
- Smits is the son of former Indiana Pacers star center Rik Smits.