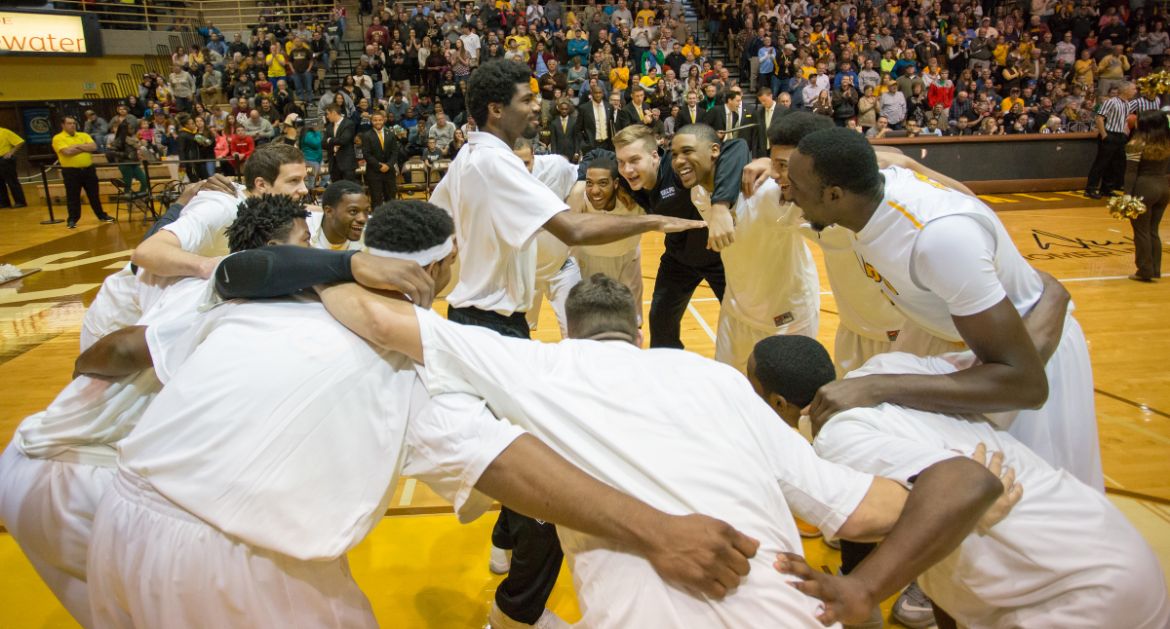 Next Up in Crusader Basketball: The Valparaiso University men’s basketball team concludes its two-game road swing through the Oregon contingent of the Pac-12 with a Tuesday evening matchup at Oregon State. The game concludes a stretch of seven games in 12 days to open the 2015-16 campaign for the Crusaders.

Last Time Out: Valpo led at halftime Sunday evening against #25/rv Oregon in Eugene, Ore. and still led with 10 minutes to play, but a six-minute scoring drought doomed the Crusaders as the Ducks pulled ahead by double figures and held off Valpo down the stretch, 73-67. The Crusaders had four players score at least 10 points, led by 14 points from Tevonn Walker.

Head Coach Bryce Drew: Bryce Drew (99-43) is in his fifth season at the helm of the Crusader men’s basketball program in 2015-16. In his first four years, Drew has led Valpo to three Horizon League regular season titles, two Horizon League tournament championships and four postseason berths, including a pair of NCAA Tournament appearances. The 2012 and 2015 HL Coach of the Year, Drew ascended to the head coaching position on May 17, 2011 after spending six seasons as an assistant and associate head coach with the Crusaders.

Series Notes: Valpo and Oregon State will be meeting for the first time in program history on the hardwood. The Crusaders are just 1-9 all-time against current Pac-12 institutions following their loss at Oregon on Sunday, with the win coming in 2008 in the first round of the CBI at Washington.

...notes from Oregon
- Valpo trailed by eight in the first half with 4:41 to play before tying it up 1:34 later and taking a two-point lead into the half on a banked-in triple from Tevonn Walker.
- Walker had 12 of his team-high 14 points in the first half.
- The Crusaders led by as many as four points in the second half and still led with less than 10 minutes to play.
- Down eight with 2:34 to play, Valpo hit a pair of 3-pointers to close within two points with 31 seconds to go.
- The Crusaders were out-rebounded for the first time this season (38-31).
- Valpo out-scored Oregon off the bench 19-4, and owns an average edge from bench players of 24.8-11.5 this season.

...looking ahead
- Valpo concludes a three-game road swing Saturday night at Ball State.
- The Crusaders’ lone home game in a span of a month comes on Dec. 3 against Belmont.

...on the road
- The game against Oregon State is the third of seven true road games for the Crusaders in the non-league slate (1-1 so far).
- Last season, Valpo went 8-4 in true road games and 13-5 overall in games away from home.

@OregonStateMBB
- Oregon State enters Tuesday’s game at 4-0 this season, most recently winning at UC Santa Barbara on Saturday night.
- The Beavers and Crusaders have one common opponent so far in Iona, with both teams beating the Gaels by 20+ points.
- Oregon State went 17-14 last year and 8-10 in Pac-12 play in its first season with Wayne Tinkle as head coach.
- The Beavers have been led so far this season by senior guard Gary Payton II, who averages 17 points, 7.3 rebounds, 5.5 assists and 3.8 steals per game.

Five Wins in Seven Days
- Playing two games in a three-day stretch in Oregon is a luxury compared to the Crusaders’ schedule over the first week of the season.
- Valpo played five games in the season’s first seven days, more than any other Division I or NBA team during that same stretch.
- The Crusaders won all five of those games - four by double figures - to win five in seven days for the first time in program history.

Poll Thoughts
- Valpo has been receiving votes in every iteration of the Associated Press Top 25 poll this season to date.
- Most recently, the Crusaders picked up a pair of points in this Monday’s poll following the loss to Oregon.
- Valpo moved up to #3 in Mid-Major Madness’ Power 15 and sits at #3 in College Insider’s Mid-Major Top 25.

What’s Back This Season
- If you said “everything”, you’d be close – the Crusaders return nearly all their players from last year’s record-setting squad.
- 10 of last year’s 11 letterwinners are back for Valpo in 2015-16, comprising 98.8% of its scoring and rebounding and 98.3% of its minutes played from last year’s squad.
- Valpo is the only D-I team in at least the last three years to return all five starters from a team which won at least 28 games.
- Forward David Chadwick, who averaged 2.3 points and 1.3 rebounds per game in 12 appearances last year, is the only loss from last season.

What’s New
- With so much returning from last year, the Crusaders have still found room for some new faces on this year’s squad.
- Lexus Williams is back for the Crusaders after missing the entirety of last season with a knee injury.
- LSU transfer Shane Hammink and UMKC transfer Chandler Levingston Simon are both eligible this season after sitting out last year.
- Derrik Smits is the lone freshman on this year’s team – the 7’1” center was an Indiana All-Star at Zionsville H.S.

High Praise Entering the Year
- With the glut of returnees from last year’s team, the Crusaders have been on the receiving end of high praise from a myriad of national outlets entering the season.
- ESPN.com, SI.com, NBCSports.com, NCAA.com and CBSSports.com have all listed Valpo at or near the top of their respective top mid-major teams.
- The Crusaders were #35 in Ken Pomeroy’s preseason ratings and were ranked #41 entering the year by CBSSports.com.
- Valpo picked up five points in the preseason AP Top 25 poll.
- Individually, head coach Bryce Drew was tabbed one of 10 Coaches on the Rise by CBSSports.com’s Jon Rothstein.
- Vashil Fernandez was listed among the nation’s top-seven rim protectors by NCAA.com.
- Alec Peters is one of 20 players on the watch list for the Karl Malone Award, presented to the nation’s top power forward, and is also on the watch list for the Lou Henson Award.

Oh Canada!
- Valpo went on an international tour this past August to Canada, spending time in Montreal and Ottawa.
- It marks the second time in program history that the Crusaders have taken advantage of the chance to take an international trip.
- Valpo went 4-1 on the trip, with wins over the Montreal All-Stars, Brookwood Elite, McGill and Ottawa, and a loss to five-time defending national champion Carleton.
- Shane Hammink scored in double figures in all five games of the trip to lead the Crusaders.

NBA Lineage
- Three members of this year’s Crusader roster boast fathers who played at the highest level of pro basketball - in the NBA.
- Most notably, Derrik Smits’ father, Rik, played 12 seasons with the Indiana Pacers and was an All-Star.
- Chandler Levingston Simon’s father, Cliff Levingston, was an 11-year NBA vet who won two titles with the Chicago Bulls.
- Shane Hammink’s father, Geert, was a 1993 first-round draft pick who played parts of three seasons in the NBA.

Bryce Drew
- Bryce Drew is in his fifth season as head coach of @ValpoBasketball and is in his 11th season overall on the coaching staff.
- Drew was named HL Coach of the Year in 2014-15, leading Valpo to a school-record 28 victories and the league regular season and tournament titles.
- In 2013-14, Drew led the Crusaders to 18 wins and their fourth straight postseason berth.
- In 2012-13, Drew guided Valpo to its second straight regular season title, its first tournament title and a then-school record 26 wins.
- Drew was named Horizon League Coach of the Year in 2011-12 in his first season as head coach, winning 22 games and the league regular season title.
- Drew was the first Crusader men’s basketball Coach of the Year since 2001-02, when dad Homer won the honor in the Mid-Con.
- Prior to coaching, Drew spent seven seasons playing professionally, including six seasons in the NBA.
- Drew was a two-time Mid-Con MVP in his playing days with Valparaiso, helping the team to three NCAA tournament appearances.
- Drew hit “The Shot”, a buzzer-beating 3-pointer in the first round of the 1998 NCAA tournament, to lift the Crusaders over Ole Miss.
- “The Shot” was named one of the top-35 All-Time Madness Moments by the NCAA as part of the celebration of 75 Years of March Madness.

#DrewFamilyDynasty
- Bryce is the third member of the Drew family to serve as head coach of the Valpo program.
- Father Homer was head coach from 1988-2002, and then returned to lead Valpo from 2003-11.
- Brother Scott (current head coach of Baylor) led the Crusaders during the 2002-03 season after nine seasons as an assistant under Homer.
- A Drew has been at the helm of the Crusaders for the last 27 years.
- The Drew family has combined to lead Valpo to 490 victories and 14 postseason appearances.
- Overall, the trio of Drews owns 989 collegiate victories over a combined 47 seasons of head coaching.