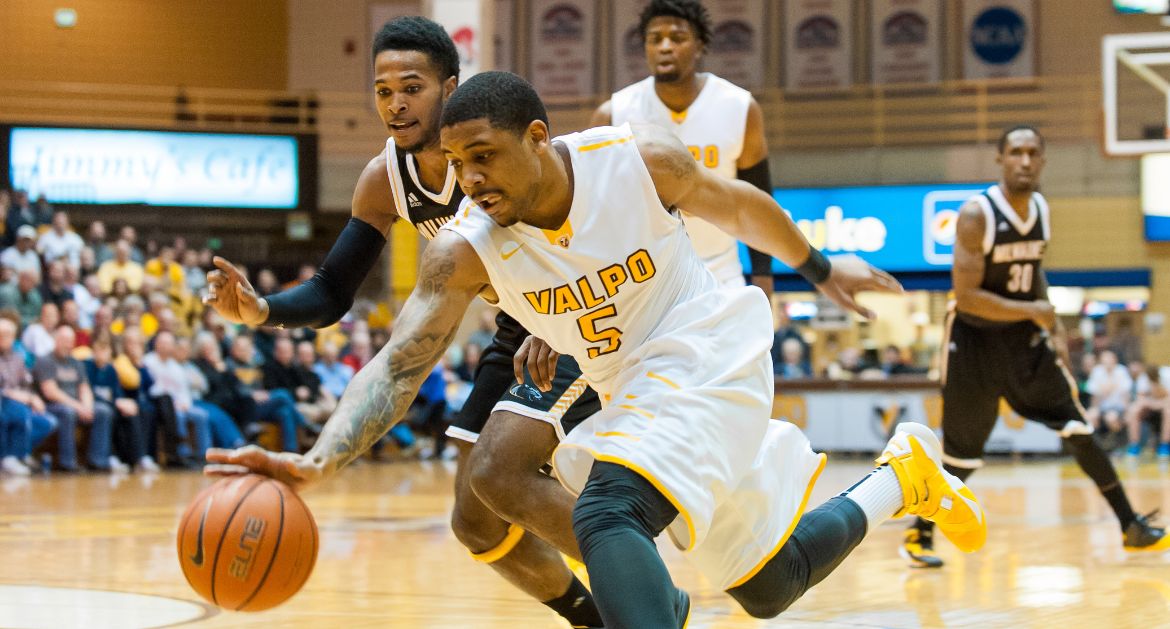 Next Up in Crusader Basketball: The Valparaiso University men’s basketball team looks to continue its recent run of success as the Crusaders look for their fifth consecutive Horizon League win Saturday night, hosting Green Bay. With a win, the Drew family will have combined for 500 victories at the helm of the Valpo men’s basketball program.

Last Time Out: A new record for home winning streak at the ARC was established by the Crusaders on Thursday night, as Valpo used its tried-and-true formula for winning games to defeat Milwaukee, 68-56, and win its 21st consecutive home game. Vashil Fernandez led the Crusaders with a season-high 14 points as eight different players scored at least five points, while Valpo limited the Panthers to 41.2% shooting in holding its opponent to fewer than 60 points for the 14th time this season.

Head Coach Bryce Drew: Bryce Drew (108-45) is in his fifth season at the helm of the Crusader men’s basketball program in 2015-16. In his first four years, Drew has led Valpo to three Horizon League regular season titles, two Horizon League tournament championships and four postseason berths, including a pair of NCAA Tournament appearances. The 2012 and 2015 HL Coach of the Year, Drew ascended to the head coaching position on May 17, 2011 after spending six seasons as an assistant and associate head coach with the Crusaders.

Series Notes: Green Bay leads the all-time series over Valpo, 28-22, but Valpo holds a slim 10-9 edge since the Crusaders joined the Horizon League prior to the 2007-08 campaign. Valpo is 8-3 at home against the Phoenix over the last eight years and has won six straight home games, including a pair of wins at the ARC last year. The Crusaders won the regular season home matchup 63-59, and then downed the Phoenix in the Horizon League Championship game by a 54-44 final.

...notes from Milwaukee
- Valpo overcame its largest deficit of the year in a victory, as the Crusaders trailed by five on multiple occasions in the first half.
- The Panthers scored 21 points over the first 11 minutes, but Valpo limited them to just 33 points over the final 29 minutes.
- Vashil Fernandez led Valpo in scoring for the first time this season, scoring a season-best 14 points as he hit his first six field goal attempts.
- Tevonn Walker scored in double figures for the fifth time in six games since returning from injury, adding 11 points.
- Alec Peters failed to score in double figures for the first time this season as he finished with seven points.
- Valpo enjoyed a monster 47-22 edge on the glass, and had 18 offensive rebounds against just 18 defensive boards by the Panthers.
- The Crusaders out-scored Milwaukee on second-chance points, 20-0, points in the paint, 40-16, and bench scoring, 23-0.
- Valpo won despite shooting a season-worst 41.2% from the free throw line.

...looking ahead
- The Crusaders have a quick turnaround for their longest road trip within league play, as they play at Youngstown State on Monday night.
- A three-game road swing continues next Friday evening at Wright State and Sunday afternoon, Jan. 24, at Northern Kentucky.

...at the ARC
- Valpo has 15 regular season home games scheduled for the Athletics-Recreation Center in 2015-16 and is already 8-0 at home this year.
- The Crusaders have won 21 consecutive home games dating back to December of 2014.
- The Crusaders posted a 15-1 record at the ARC last season, the second-most home wins in a single season since the building opened.
- Valpo’s .938 home winning percentage last year was also the second-best since the ARC opened.
- Over the last 21 years, the Crusaders own a 258-57 (.819) winning percentage on their home court.

There’s No Place Like Home
- Thursday’s win meant the Crusaders set a new program record for the longest winning streak at the ARC.
- Valpo enters Saturday’s game against Green Bay with 21 consecutive home wins, breaking the previous record of 20 with the win over Milwaukee.
- The Crusaders have not lost at home since falling to New Mexico on Dec. 6, 2014 - Valpo went 15-0 at the ARC in the 2015 calendar year.
- The previous 20-game home win streak at the ARC started Nov. 24, 2001 with a win over Milwaukee and came to a close Feb. 1, 2003 with an overtime loss to UMKC.
- Valpo’s 21-game home winning streak is currently tied for ninth nationally with Stephen F. Austin.

@GBPhoenixMBB
- Green Bay enters Saturday night’s game at 11-6 overall and 4-1 in #HLMBB play so far this season.
- The Phoenix are coming off a 78-76 win at UIC on Thursday evening.
- Carrington Love leads an explosive Green Bay offense with 17.6 ppg, one of four Phoenix players averaging in double figures.
- Green Bay ranks second in the nation in adjusted tempo and owns the quickest average offensive possession length in the nation.

Racking Up the Big Wins
- The Crusaders have had little drama in the stretch run of Horizon League games so far, winning all four league games by at least 12 points.
- Last season saw Valpo win six consecutive games by double figures in the non-league portion of the season.
- It’s been over a decade since the Crusaders won four straight conference contests by double figures, as you have to go back to wins over Centenary, Oakland, Oral Roberts and Western Illinois Dec. 2005-Jan. 2006.

Peters Enjoys Career Night
- Junior Alec Peters put together one of the most impressive performances by anybody in college basketball this season in last Sunday’s win at Detroit.
- Peters went 12-of-20 from the floor, including 4-of-10 from 3-point range, and 11-of-11 from the foul line for a career-best 39 points.
- Peters’ 39 points is believed to be tied for seventh-most in a single game in Crusader men’s basketball history.
- Peters’ 11-of-11 performance from the free throw stripe matched the most makes without a miss by a Crusader since Jamie Sykes went 13-of-13 at Northeastern Illinois in January of 1998.
- Peters added a career-best 14 rebounds, making him one of just three players in the nation to go for 39/14 or better this season (Ben Simmons - LSU; Brice Johnson - North Carolina).
- Peters earned his third career Player of the Week honor from the Horizon League office, was named #HLMBB and national High-Major Player of the Week by College Sports Madness, and earned Lou Henson Award National Player of the Week honors from College Insider.

Glance at the Rankings
- The Crusaders picked up votes in the Associated Press Top 25 preseason poll and in each of the season’s first two weeks.
- Valpo has moved back into the receiving votes section of both the AP and the coaches polls this week, earning six points in the AP poll and five points in the coaches poll.
- As of games of Jan. 14, Valpo ranked 23rd in the nation in RPI.
- Valpo enters this week atop the Mid-Major Madness Power 15 and ranked second in College Insider’s Mid-Major Top 25.
- Following the win over Detroit and subsequent results, the Crusaders moved up to #18 in Ken Pomeroy’s rankings and stayed there following the win over Milwaukee.
- Valpo closed last season at #61 in the KenPom ratings - its highest year-end ranking was back in 2001-02 (#51).

Getting It Done With Defense
- One of the best defensive teams in the nation last season, the Crusaders have been even stronger defensively this season.
- As of the start of play Friday, Valpo ranked second in the nation in Ken Pomeroy’s adjusted defensive efficiency, just slightly behind Louisville.
- Valpo’s scoring defense (59.1 ppg) ranks fourth nationally, while its field goal percentage defense (37.2%) is good for ninth in the nation.
- The Crusaders have limited Iona, Rhode Island, Oregon State, Belmont and Milwaukee all under 60 points this season - none of the four teams have been held to fewer than 62 points in any other game - while they also held Oakland to 67 points, its second-lowest output of the year.
- Valpo has given up 47 or fewer points four times already this year - the first time the program has done that in one season since the 1948-49 campaign.
- Through three Horizon League games, the Crusaders have held their opponents’ leading scorer to combined 20-of-69 shooting (29.0%) from the floor.

1,000 Wins for the Drews
- The Drew family dynasty reached a milestone in the Missouri State victory Dec. 19, as Valpo’s win gave Homer, Scott and Bryce Drew a combined 1,000 collegiate head coaching victories.
- The family now owns 1,009 combined wins, as Homer Drew won 640 career games, while Scott Drew owns 261 career wins and Bryce Drew enters Saturday with 108 wins.
- The Drew family ranks third in collegiate history (most of their careers at the D-I level) for combined wins, ranking behind only the Ibas and the Suttons.
- The Drews are closing in on another milestone as well, as they have combined to lead the Valpo program to 499 victories.